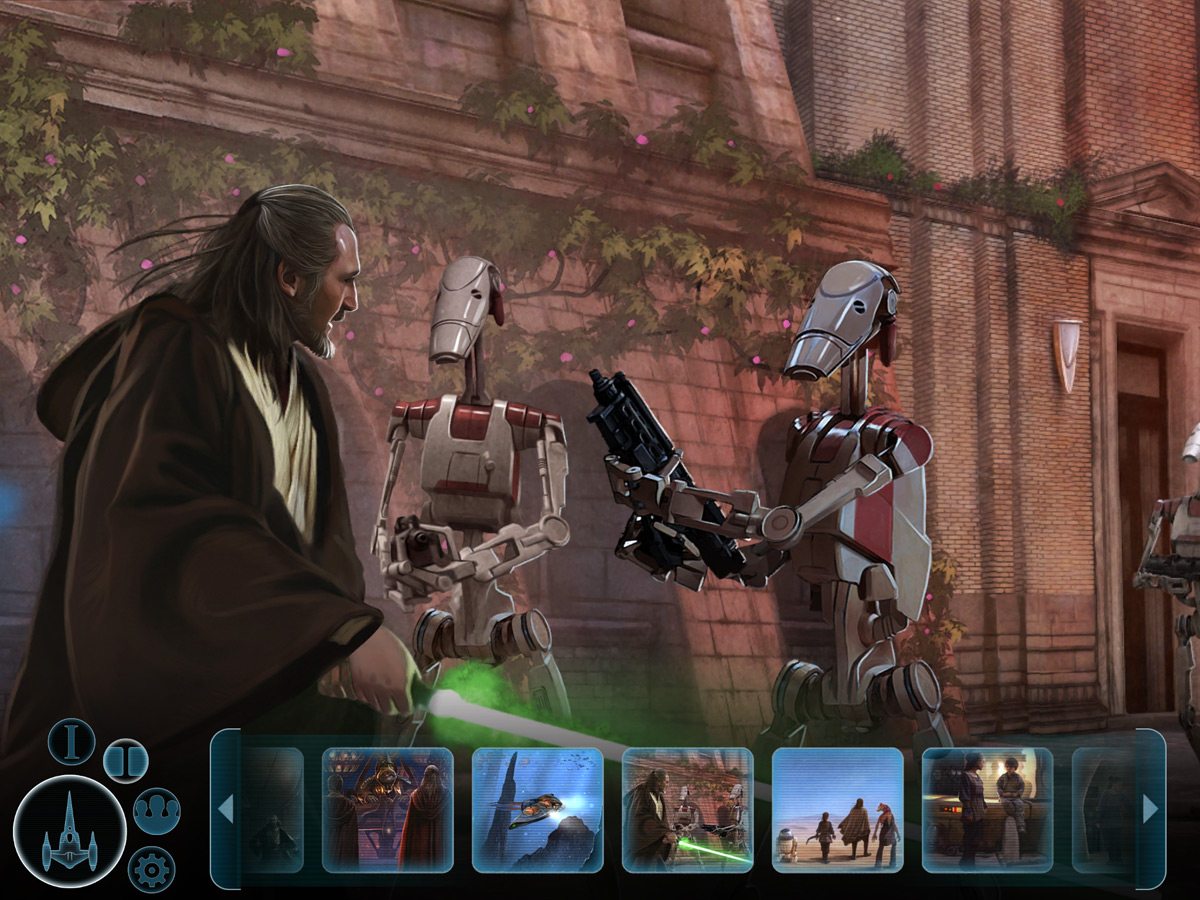 With the recent casting news for Episode VII unleashed upon the world, and a new trailer for the upcoming animated series Star Wars Rebels, we are back in the heady days of Star Wars hype. A new app from Disney Publishing takes us back to the last time we were excited for a new Star Wars film with Star Wars Journeys: The Phantom Menace, an interactive storybook for the iPhone/iPad. But is $6.99 worth it for an app that retells the film most consider to be the worst of the trilogies?

If this is your child’s first exposure to the galaxy of Star Wars, it’s a good place to start. My five-year-old has yet to make it through a Star Wars film all the way to the end, but when I showed her the app, she was excited to explore the storybook together at her own pace.

The story walks through the plot of the first prequel, with the original cast’s voices and music. There are a lot of words on each page of the app, and no word-by-word highlighting to the narration, so my daughter’s interest would sometimes fade on some of the longer pages. Geek parents who think they know everything about Star Wars might even learn a thing or two from the thorough text, like the kind of fish that attacks Qui-Gon and Obi-Wan (Opee Sea Killer, duh) and Chancellor Valorum’s first name (Finis).

The interactive artwork is well done and highly detailed, down to blinking Gungans and falling confetti, and hidden in each page are secret objects. Tapping these objects gives you “SP,” points for podracing, that can be spent on new podracers and customization. This gives kids an incentive to play through the story more than once to hunt those items down.

With the amount of podracing content in the app, you are getting two games in one with Star Wars Journeys: The Phantom Menace. There are a variety of podracers, tracks, and racers themselves to choose from, although my daughter was dismayed at the lack of female characters. “Don’t they know girls want to play?” she asked. Good question.

After completing the storybook, my daughter stood up and yelled triumphantly, “I’ve finally seen Star Wars!” Seeing my five-year-old excited about Star Wars absolutely made the high price worth it.

Star Wars Journeys: The Phantom Menace is a pricey app, but with the amount of content you get, it’s not a bad investment. If you strongly dislike The Phantom Menace, it might be worth skipping this one—Disney Publishing has already announced plans upcoming storybooks to cover all six Star Wars films. If this first Star Wars Journeys app is any indication, those apps will be detailed, enjoyable, and a great way to introduce kids to a galaxy far, far away.