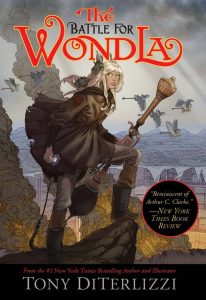 A young girl, raised by a robotic “mother” in an underground facility, emerges to find a completely unfamiliar world. Her all-purpose Omnipod cannot identify anything she encounters, and none of her holo-chamber training exercises has prepared her for the reality of life outside the Sanctuary. This is the story of Eva Nine, which began with The Search for WondLa four years ago. Book Two, A Hero for WondLa, was published in 2012. The story finally comes to its conclusion today with the release of the final book in the trilogy, The Battle for WondLa.

The WondLa series, written and illustrated by Tony DiTerlizzi, is a fantastic science fiction journey that has been one of my family’s favorites, and we’ve been eagerly anticipating this third volume. Eva Nine’s journey leads to a deeper understanding of the outside world and of herself, and it’s a beautiful coming-of-age tale. DiTerlizzi’s illustrations throughout the books are a wonderful blend of nineteenth-century fairy tale illustrations and modern-day digital tools. The stories are full of colorful alien characters, bizarre flora and fauna, and surprising discoveries. If you haven’t read them yet, I highly recommend diving in soon: you’re in for a treat!

I spoke last week with author-illustrator Tony DiTerlizzi about WondLa, Dungeons & Dragons, and Star Wars—you can read or listen to that interview here.

[NOTE: Be aware that this post will contain spoilers for the first two books, although I will try to limit spoilers for Book 3.]

As DiTerlizzi explained it, so many books feature orphans, but in this case Eva Nine starts off with a mother, albeit a robotic one. Throughout the the first book, Eva relies on Muthr but begins to realize that Muthr doesn’t always have all the answers. At the end of the book, though, Muthr sacrifices herself to save Eva’s life, and Eva can no longer rely on her for guidance. However, she’s not totally alone: Rovender, a Cerulean alien who eventually befriends her, becomes something of an adopted father to her.

But then Hailey shows up: a human pilot who’s ready to take Eva to New Attica, a human city. This opens the second book: Eva is thrown into a totally new environment. She’s finally surrounded by other humans, but it turns out they’re not really like her after all. Her unplanned journey through the outside world has shaped her perspective, and she starts to see the cracks in the facade. Authority figures aren’t perfect, and Eva has to decide what and whom to trust. By the end of the book, Eva is a fugitive from New Attica, and a fierce battle has begun between the humans of New Attica and the various alien races.

In the final book, there are fewer new locations and characters—instead, Eva Nine revisits many of the locations she’s been through in the first two books, usually with a new perspective. And because of the war, many of the aliens also have a different attitude toward Eva. But she knows that the war will have no true victors, and her goal in the third book is to bring peace to Orbona—as impossible as that may seem to those around her. One of the big themes of the third book is trust: who can Eva trust? How can she gain the trust of others?

I also like the way that we get to see many characters from a different perspective. The good guy/bad guy mentality of the first book gives way to a more nuanced view of the world, Eva learns to consider someone’s motivations rather than just their outward appearances and actions.

The Battle for WondLa definitely provides a more mature point of view than the first two, reflecting Eva’s growth. It’s still kid-friendly and as always there’s a mix of big, exciting battles and more contemplative scenes. I think it’ll be particularly thought-provoking to tweens and teens who are, like Eva, beginning to question authority. It’s not so much that Eva disregards authority, but that she realizes that everyone can make mistakes, and everyone is capable of doing good. As my own kids no longer think I’m perfect, maybe this story will reassure them that I’m doing the best I can.

Like the first two, The Battle for WondLa is a hefty book—it has three “parts,” each of which is the size of a typical middle-grade novel—but don’t let that dissuade you. It’s the sort of book that flies by once you get into it, and you’ll wish it were even longer. Since this is the conclusion of the story, DiTerlizzi had his work cut out for him: how do you lay a story to rest in a way that satisfies the readers, that really ends the tale? I think the end result works well, though I have to admit that I’ll always crave more WondLa. I’m hoping that eventually the promotional sketchbooks (so far only available at conventions and readings) will be collected and reprinted as a book, but there aren’t any guarantees of that.

The WondLa trilogy is a long journey well worth taking, whether you’ve got kids or not. I’ve enjoyed reading the books aloud to my daughters—and look forward to doing it again when baby number three is older.

Disclosure: GeekDad received a copy of the book for review purposes.