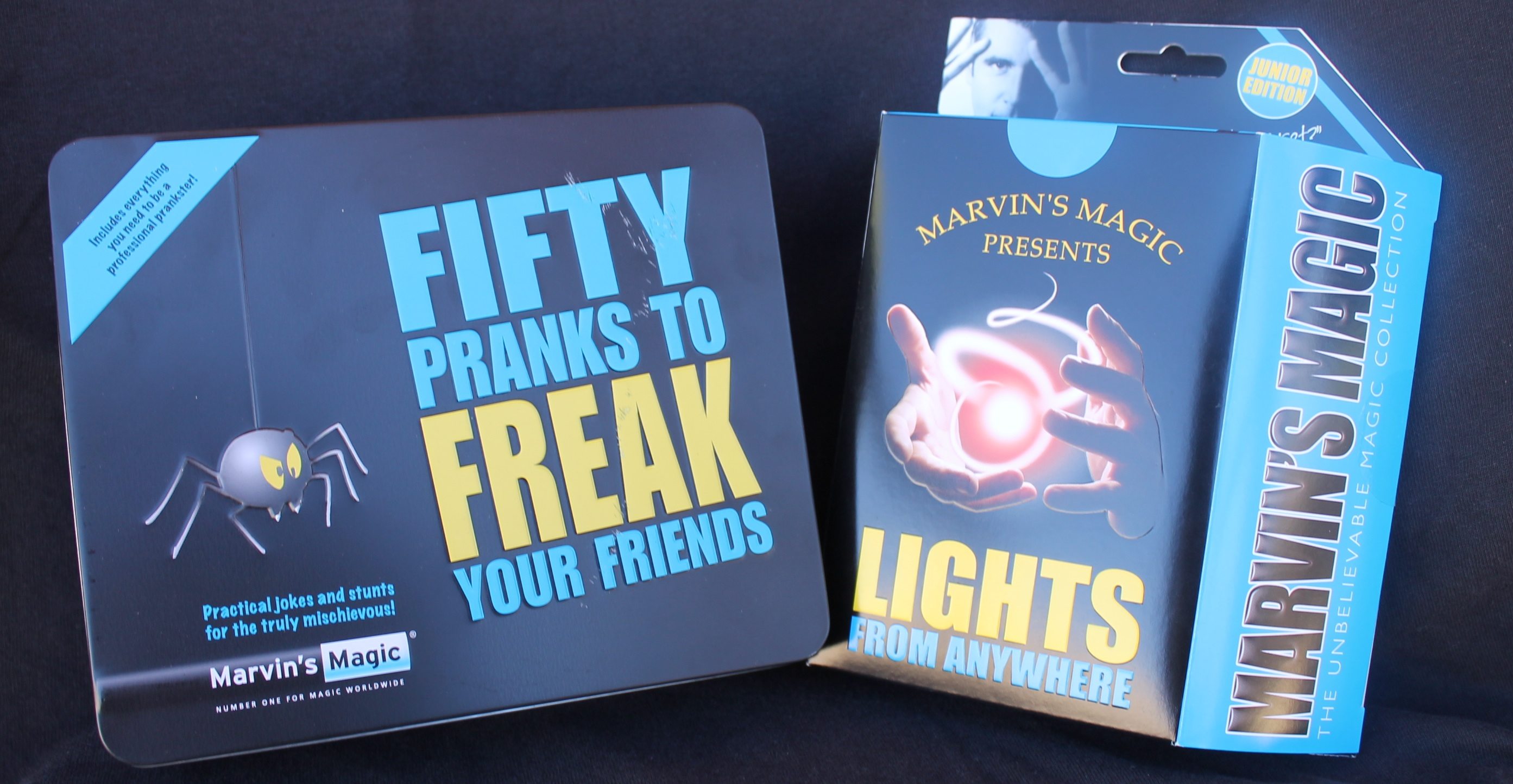 With April Fools’ Day approaching, I thought I would try out a couple of kits from Marvin’s Magic, created by British illusionist Marvin Berglas. This resulted in two generations comparing “high tech” trickery with “old school” pranks. It was which generation was drawn to which kit, however, that surprised us the most.

One of the kits incorporated a high-tech theme to sleight of hand with the Junior Edition of Lights from Anywhere. I won’t reveal its secret, but will say it is deceptively simple. A little fancy sleight of hand practice and the proper room lighting on the part of the user will result in an very impressive little display. When we showed it to family members who weren’t yet “in on the trick,” they were very impressed. You can see a few seconds of my own awkward, unpolished attempt at this Light Illusion. If I can achieve this in a just a short time, imagine what some practice could do for more graceful hands.

I personally found this illusion extremely addictive and spent a good portion of the evening hoarding the trick, practicing “bouncing” the light around, and pretty much pretending to be Loki. This trick is suggested for ages 8 and older, and rightly so, as it would be something a little harder for smaller hands to master. Our 11-year-old daughter found it a little harder to control, but enjoyed it nonetheless.

We also checked out the Fifty Pranks to Freak Your Friends kit after the light show and I admit I was underwhelmed at first, especially after playing with “magic light” for the previous hour. Also, having grown up in the home of a full-time prankster, my dad, I recognized some of my his favorite homemade pranks with new packaging, but my daughter fell immediately in love with all of them.

It was the simplicity of the execution, the mischievous Weasley Twins-style potential and the promise of those unabashed facial expressions surprise from her victims, that really drew her in. She especially loved the “Scary Spider Trap,” and “Freaky Body Parts” in a box. Anyone who remembers the classic “rattle snake eggs” prank or “mummified finger” causing big scares–followed by big laughs–as a kid will be nostalgic with these pranks, as well.

She tried most every item in the box at least once, giggling the entire time. She read the kit’s booklet on how to use each prank in different ways, as well as suggestion for fun pranks that don’t even require the provided props. She plotted out loud which friends and family members—and some good-natured teachers—she wanted to torture with certain pranks.

Finally, booklet in hand, she disappeared from sight for about a half hour before her bedtime. The quiet should have tipped us off that something was amiss, but we were too busy playing with the “pretty lights” to notice. It wasn’t until we entered our own bedroom later that night, and found ourselves victims of the Great Pink Post-It Explosion of 2014. As we stood dumbfounded in our room looking at a small army of pink notes, each naming the item they were stuck to (phone, lamp, pillow, Middle Earth sword, etc.), we heard a blast of laughter coming from across the hall. Apparently, our silent shock was just the reaction our apprentice prankster wanted, and she laughed hysterically for about five straight minutes. For our daughter, this simple prank, well executed and timed, was worth its weight in 100 fancy “high tech” illusions.

Although the light-based magic was a welcome addition to our family time, we learned with every generation everything old is new again, but it never does stop being fun.

Lights From Anywhere, and Fifty Pranks to Freak Your Friends are available at marvinsmagic.com

It’s Way Past Time to Stop Saying Things Are “Retarded”

Don’t Rain On My (Dragon Con) Parade! …And What To Do If It Does

Crayola Doesn’t Make A Color For Your Eyes