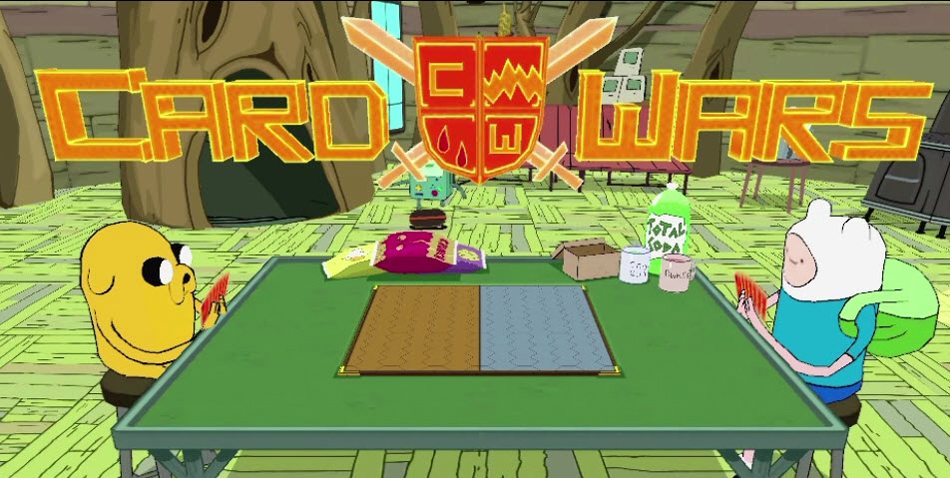 Despite being the animated equivalent of a bottle episode, “Card Wars” was an easy standout in Adventure Time‘s fourth season. Focusing firmly on the Finn/Jake dynamic while also lampooning CCGs, it offered us an interesting look at what still passes for entertainment in the post-apocalyptic Land of Ooo. Diehard AT fans can now experience the excitement of Card Wars on their iPhones, iPads and other iThings thanks to Cartoon Network and D3 Publisher, the same parties responsible for the property’s previous DS/3DS titles.

Boasting all of the series’ visual charm and skewed sense of humor, Card Wars finds gamers challenging fan-favorite Ooo denizens as they make their way across the play map. With varying terrain types that support vastly different creatures, there’s some real strategy that goes into customizing your deck, and a leveling system means that expanded card slots and stronger card types (creating by fusing together older cards) become available as you play.

Buildings and spells obviously play a part, usually dealing damage, providing buffs or helping you cycle more quickly through your draw deck, and each Landscape type, which can be mixed and matched, supports a different style of play. From the fearsome warriors of the cornfields to the healing magics of the Nicelands, it’s hard not to get pulled into world of Card Wars. 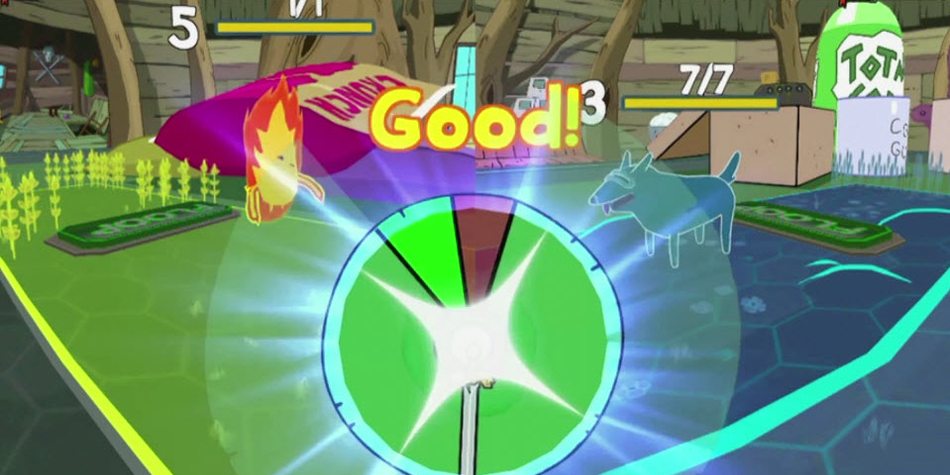 But don’t think that the game is all meticulous deck-building! In addition to the inherent randomness of drawing your play hand, Card Wars also relies on a spinning wheel to aid in both attacking and defending. Stop the spinner in the right place and you can more easily punch through your opponent’s defenses and damage his fragile HP, or, better yet, block incoming attacks; of course it also cuts both ways, and stopping outside the safe zone will result in missed attacks and unwelcome damage to you or your troops.

Despite this engaging depth, however, the game isn’t exactly a home run. Occasional hang-ups and graphical glitches have continued to pop up on both my iPad Mini and my iPhone 4S, but even this isn’t Card Wars‘ biggest problem. At $3.99, the game is already a little on the expensive side, and its energy system also opens the door for annoying, spammy in-app-purchases.

Challenging an opponent costs Heart Energy, and, while this restores slowly over time, players are forced to use the game’s in-game currency, gems, if they want to keep playing after their initial reserves are exhausted. These same gems can be used to buy new, rare cards and increase inventory slots, and, unsurprisingly, the best way to get more gems is to buy them with real-world cash. 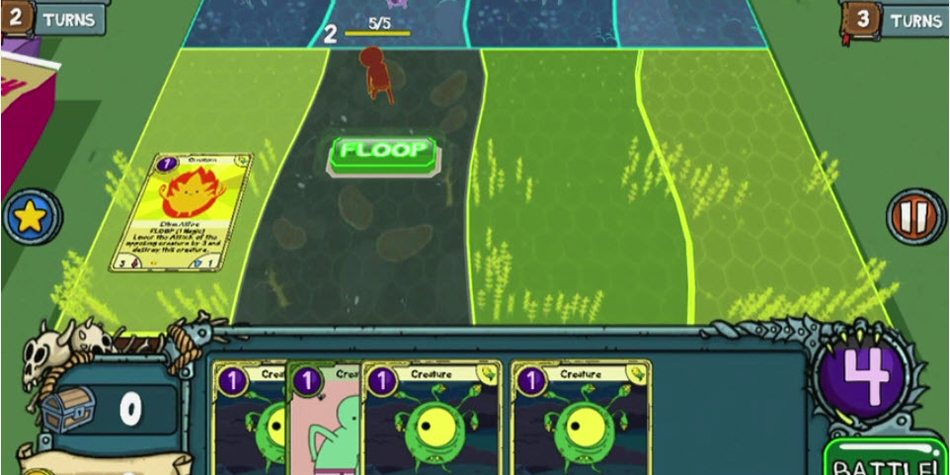 I don’t think I’d find this free-to-play tactic so distasteful – even implemented within a $4 title – if the game itself weren’t so damn enjoyable! Being stopped cold and asked for another buck when I’m otherwise on a card-flooping roll pulls me out of the zone and squashes my fun. Card Wars is crazy addictive, but the ever-present specter of the dreaded IAP serves to mar an otherwise enjoyable mobile gaming experience. 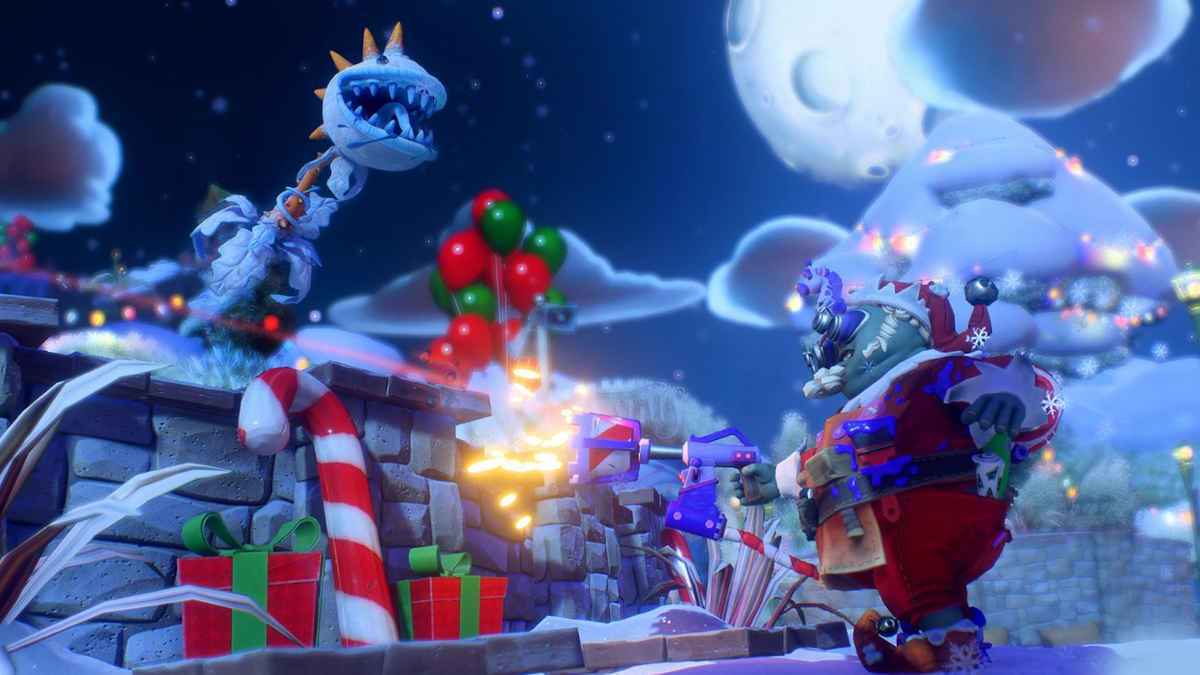 EA for the Holidays! Videogames for the Whole Family 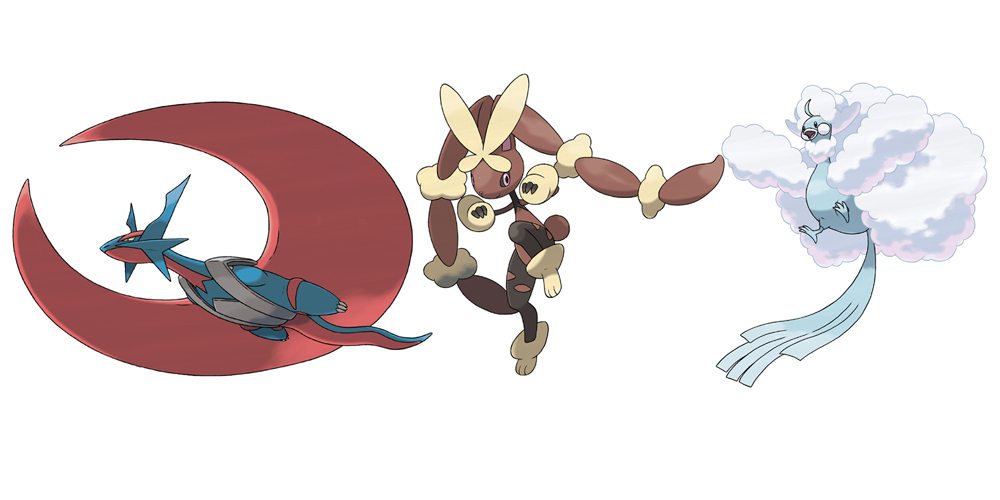 3 thoughts on “Card Wars Floops the Pig on iOS”