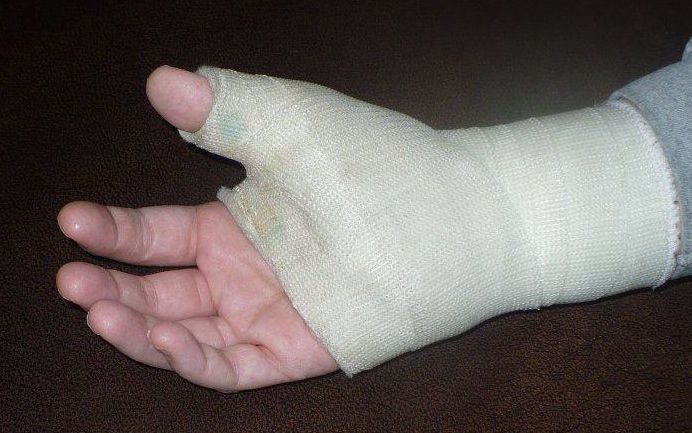 I know that opposable thumbs are what separates humans from most mammals. I always realized at an intellectual level they’re necessary for daily living.

What I didn’t understand until my right thumb was put in a cast was how necessary two thumbs are.

The cast was put on two weeks ago to give damaged ligaments rest and time to heal. I thought I’d be all right since the fingers of my right hand were left free.

I began to get annoyed at my limitations and then, being a geek, I decided to pretend it was a big science experiment. First, I started researching thumbs online. Wikipedia had a fairly impressive article to get me started. That eventually led me to a book called Hands by John Russell Napier.

Next, I made a list of things I cannot do with only one thumb.

1. Shampooing and other hair care tasks.

I had to keep the cast dry. That left me one-handed in the shower. Because I wanted to squeeze the shampoo into my usable hand, I had to brace the slippery bottle against my body. This was less an ideal.

Pulling my hair back from my face with an elastic also proved impossible alone. It takes two thumbs. One to grasp and hold the hair and another to manipulate the elastic.

The three cats are served moist food from pouches once a day. It requires two grips to open those pouches, one to hold the pouch, the second to pull the top off. That’s impossible with just one grip.

This I didn’t expect to be a problem in the least. I could use my left hand to stir, right? No.

It turns out that without even thinking about it, I’d used my left hand to hold the bowl steady while I stirred with my right hand. I tried gripping the bowl with my fingers and them bracing it against my chest but that didn’t work very well.

I punted and called on the eldest son for help.

4. Opening any sort of package.

I had the same problem as with opening the cat food pouches. It requires one grip to hold a package and another to tear it open. I had to call on the kids to open sealed plastic bags inside cereal boxes, covers on granola bars, and even needed help opening the medicine bottle holding my youngest daughter’s antibiotics.

We have six people in the house. It falls to me to do three loads of wash per day. Hauling the bucket up and down the steps wasn’t a problem because I could use the fingers of my right hand and didn’t need a tight grip.

Folding the clothes was another matter.

It requires two functional hands to operate something as simple as a zipper.

I’m so glad I have so few shirts with buttons.

I thought between the fingers of my right hand and the grip of my left hand, holding the steering wheel wouldn’t cause any problems.

Then New England received an extra large helping of snow which required two steady hands on the wheel. I had to give up driving the minivan because the wheel turned harder.

These were all things I did every single day and all things that were closed down to me with only one thumb available. I didn’t expect it to be so limiting but it is.

One silver lining. I did manage to get the kids to do more chores around the house.

[This post originally ran in January, 2011. Cory’s hand is much better now.]