Imagine a community where you could get the low-down on every guy in town–what they are really like to date?

That’s The Cute Girl Network in the fictional town of Brookport in a new graphic novel published by First Second. The two writers MK Reed and G. Means, and artist Joe Flood, collaborated on the project. The story revolves around a newcomer to Brookport: a skater-chick named Jane, who falls for sweet, but hapless Jack. She is pulled into The Cute Girl Network, with horrible stories of Jack. Will she trust her instincts? Or her new girlfriends? The graphic novel comes out November 12th.

I had the opportunity to interview the creators, and I love their answers! Check it out:

GeekMom: Three collaborators on a graphic novel. How did that come about? How did the process work throughout the project?

MK: We did it through the magic of the internet. Greg and I wrote the script over Google Docs, which allowed us to both contribute parts & do rewrites of each other’s sections and have it all up-to-date in one file while working from opposite sides of the country. Joe came along after First Second had picked it up, and thumbnailed the book, sent it to us for feedback, and then turned in the finished art a year later.

Greg: MK and Joe have been good friends for years. They take road trips together and he sleeps on her couch sometimes. I was always hoping to team them up on a project, luckily the stars aligned for this one.

Joe:  I was nervous about having two writers at first, I assumed that would translate into twice as many notes, two pairs of eyes scrutinizing every line I draw. But it turns out Greg and MK complement each other, they have a wonderful Yin and Yang thing going. I guess that would make me the poorly drawn dragon wrapped around it when it’s tattooed on the back of some dude’s neck.

GeekMom: I have to admit, as soon as the “Vampyr Moon” conversation began, I rolled my eyes thinking it would be yet another bash-fest about Twilight. But the conversation in the book was more real than I expected–with fair viewpoints. Although I’m not a fan of the Twilight series myself, I find the extreme negativity associated with it very distasteful. So thank you for that. Thoughts on it? The excerpt at the end was hilarious. Who decided to put that in? How fun was that to write?

MK: The Twihards take a lot of BS for their love, but it’s certainly not significantly more ridiculous than the rest of comic, sci-fi, & fantasy fandoms. That said, I completely disagree with its messages (as I understand them without having read the books*), but that’s what made it so fun to parody.
*Our book designer Colleen first told me about this ridiculous vampire romance series in maybe 2006 or 2007, and I listened to the first twenty minutes of the audiobook before I found Bella to be UNBEARABLE.

Greg: The “Vampyr Boyfriend” excerpt at the end was MK’s idea. She’s great at that stuff. Check out her fake fantasy novel in her previous book AMERICUS for proof. We’ve got to get her do a full prose novel one of these days.

GeekMom: I see Joe lives in Brooklyn. Was that the template for the fantastic wide shots of the city in the book? I love the details.

Joe: I’m glad you enjoyed them. Hopefully I got most of the details right because I was drawing from memory. Shortly after being signed onto the book I moved to Atlanta, because my wife was going to grad school there. I was very homesick for 13 months I was working on the art, desperately trying to remember the home I had recently left. The city of Brookport is an amalgamation of Brooklyn and Portland, MK and Greg’s homes respectively. Having visited Portland, OR once briefly, I based most of the city scapes on Brooklyn. I had lived there for most of my adult life. (Grew up in NJ, lived a few years in Manhattan before settling in Brooklyn.) I’m happy to report that I’m back in the NY area, living in the suburbs. The prospect of ever moving back to Brooklyn, remains to be seen.

GeekMom: “Look, those network girls all seemed perfectly nice…but if we were in first grade together, I’d be shoving them in the mud and they’d be calling me a poop face.” This is one of my favorite quotes from the book. Jane is helping out with a project about little girls on the playground, but she doesn’t like them. She also doesn’t have a lot in common with most of the women her age, either, yet she is able to live with them. What are you trying to say about how girls interact vs how women interact?

MK: Adults are a bit better at trying to find some common ground, and can disagree without being enemies for life. Sometimes.

GeekMom: The “cute girl network” is painted as just a gossipy bunch of bitter women. Do you think there could be a positive form of the “network”?

MK: There’s totally a different book to be written where Harriet is a bad-ass who saves unsuspecting women from jerks left and right, and if we did a sequel that’s probably what we’d aim to write.

GeekMom: In Jane and Jack’s relationship, she is the motivated one for career plans, and Jack is in the supportive role. Do you think this is becoming more common in real life?

Joe: I aspire to be a stay-at-home dad.

GeekMom: Jack’s two roommates are great characters. How did you come up with them and their house dynamic?

Greg: Gil and Rose are based on two friends from my old day job. When we worked together, there was always lots of joking and bickering but when I needed their help, they’d swoop in and save the day. In real life, they liked to give me dating advice too. Some good, some not so good.

GeekMom: I would put this book in the 16+ category, mostly for the casual sex. Greg, as a librarian, how would you file your own book?

Greg: Yeah, 16+ sounds good. At my library, we have juvenile, YA, and adult graphic novel sections. I’d put The Cute Girl Network in adult. Though, I think as a teenager, I would have loved this book. I was always curious about how people in their 20s lived once they were free of school and parents. I probably would have romanticized Jack’s minimum wage job and windowless apartment.

Thanks so much for giving us some insight into The Cute Girl Network! 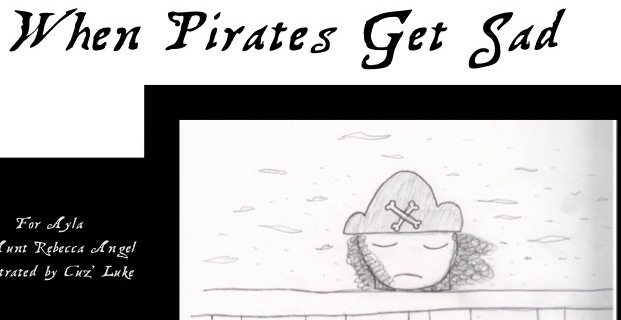 Talk Like a Pirate Day: When Pirates Get Sad