This week’s Word Nerd is yet another in the endless parade of common Facebook language errors. Thanks, Facebook, for continuing to write this feature for me.

Since today is “Talk Like a Pirate Day,” I decided to build this whole installment around America’s Favorite Pirate, Captain Jack Sparrow, AKA Johnny Depp. I’ll use him in all of my example sentences.

Roll: to tumble, or to wind on a spool (like toilet paper), something that has been wound on a spool (like a scroll), or to flatten with a roller, to travel on wheels, or a small bun eaten with dinner, or any of about 50 other definitions.

Role: a job or part to play, such as a character in a play.

Roll, in all its multi-splendored glory, goes back to about 1200; in Middle English it referred to a scroll or other cylindrical object. It comes to English by way of the Old French roulle which derives from the Latin rotulus, rotula meaning a small wheel. Rotula is a diminutive of rota, meaning wheel.

Role shows up around 400 years later in about 1600, from a French word rôle, meaning “a part one has to play.” Originally, rôle meant “a roll, as of parchment,” particularly with reference to a manuscript roll. This referred to the script that an actor studied. 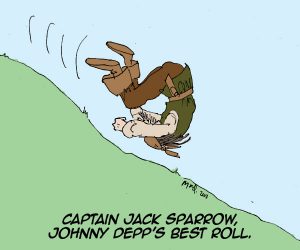 If you refer to Johnny Depp’s performance of the “role dance” in Benny & Joon, you appear to be discussing something he had to do in an audition, not to this scene.

If you say that Edward Scissorhands was Depp’s first big roll, you’re saying he fell down and did a somersault.

If you say you like the way Depp roles his eyes, you’re saying that he makes his eyes get cast in movies without him.