Schmovie is the independent game from Galactic Sneeze that I’ve been waiting for since February. I first met Bryan and Sara, the creators, back then at the NY Toy Fair. They had a demo of the game in their booth and were playing it with anyone and everyone. It was a great hit and managed to captivate me for half an hour — an eternity compared to the time I usually spend in a booth when trying to see a few thousand exhibitors in just three days.

I met up again with the Schmovie crew at Maker Faire in NYC this past weekend and invited them to hang out with us in the GeekDad booth for a while. We ended up playing Schmovie, and a few other games, all weekend long. I fell in love with the game again and really enjoyed watching everyone’s reaction.

Game play is simple but hilarious: A player is chosen at at random to be the “producer.” They roll a die to determine the genre and flip a What and Who card for the movie’s subject. All other players write down their best movie title and attempt to anonymously pass them to the producer. The producer’s favorite is awarded a Schquid trophy and the player to the left is the next producer. The first player to 4 trophies wins.

We played a couple rounds tonight as a family and everyone enjoyed the game. The box does state 13+ for age, but aside from some difficult words there is no reason that any geeklet who reads well wouldn’t enjoy playing. The rounds are quick so it’s easy to setup and play. Our first game ran about 15 minutes and the second took about 25.

Some of the combinations we ran into were:

We had a lot of great laughs and will definitely be adding this game to our family’s rotation. You can get an idea of how the game is played on the Schmovie Facebook page, and buy Schmovie on Amazon. 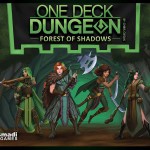 Big Dungeon Experience in a Small Box in ‘One Deck Dungeon: Forests of Shadows’ 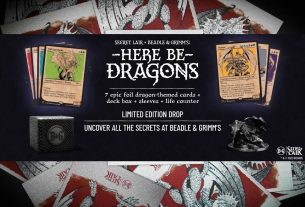