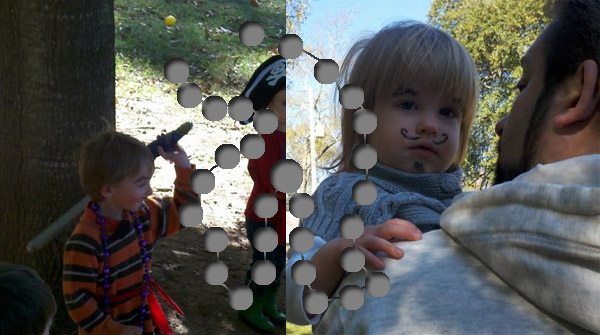 This past week’s puzzle as posted on International Talk Like a Pirate Day:

Pirate Captain Max, First Mate Nora, and two o’ their buccaneer buckos stumbled upon some pirate treaaye. Specifically, they found a bejeweled necklace o’ 31 gemstones. After findin’ its value, they picked t’ gemstones one at a time (Max, Nora, Buccaneer 1, Buccaneer 2, etc.) with each pirate pickin’ t’ largest stone left, until all t’ stones were taken. Based upon t’ observations below, how much was t’ necklace worth, and how much booty did each pirate get?

Of the several submissions sent, the most popular method used to solve the puzzle above was simple algebra. Starting on one side of the symmetric necklace, there were 3 Amethysts, 2 Sapphires, 5 Emeralds, 4 Rubies, 1 Topaz and then the central Topaz. This makes for a total of 3 Topaz, 8 Rubies, 10 Emeralds, 4 Sapphires, and 6 Amethysts.

Broken out by individual stone, it looks like this:

If Max selected the most valuable stone (central topaz) first, Nora the second most valuable, etc., their totals work out to be:

Congratulations to SAnderson for correctly answering the puzzle and having their response drawn at random from the set of reasonably correct submissions to win this week’s $50 ThinkGeek Gift Certificate.

The Hobbit: One Year and Counting (Down)

Reading With Pictures- Supporting Comics in the Classroom