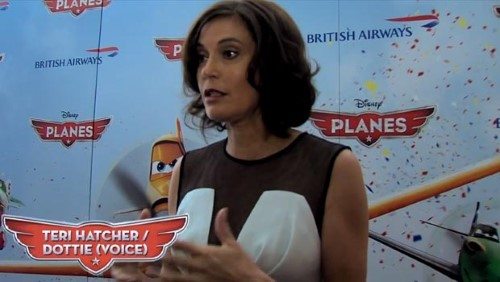 As far as geek cred goes, Teri Hatcher has it in spades. MacGyver, Tomorrow Never Dies (Bond girl), Lois and Clark, Quantum Leap, Tales from the Crypt and Coraline are some of the most memorable – just to name a few. Her most recent addition is voicing the scrappy mechanic Dottie in the new Disney movie Planes. Dottie is like the doctor for the planes at the airfield where our hero, Dusty, makes a living as a crop duster.

I recently had a chance to be in an interview with the lovely Teri Hatcher, and ask her a few questions about her role in Planes. The first question I asked her was of most interest to me, because I think voice acting is an amazing line of work – as you have seen in my example here: GeekDad Tony Tries Voicing a Plane.

Sims: Did you get a chance to actually get any booth time with some of the other actors, or was it mainly just you?

Hatcher: No, I didn’t and, it’s funny- you rarely ever do and I guess I could’ve learned that from Coraline. I never even met Dakota Fanning until we were on the red carpet for the premiere, like, and I don’t know if this is true, but I heard that I had been cast because Henry Selick matched the voice patterns of Dakota and I because I played her mother, he wanted the closest, you know, that was one of the reasons that apparently, mysteriously I was cast.

And, then technically, I think what I didn’t realize before somebody told me this is, on camera, you can step over each other’s lines because you’re seeing the two characters, or you can be mic’d separately so that they can record that sound separately and be able to technically hear both of you equally clearly. If we were both in a recording booth together, it would be- it’s not that it’s never done, it’s just it would be much more difficult to get the tracks in a clear way that the sound editors can then go in and make it all magically work.

And so they, rarely do it, I thought, you know, it’s, it’s a little weird. I mean, so it’s, you would think it would be easier to act off the actor that you are working with, see what they’re doing and, and then you react from that, or you do something and they react from that, but I guess that is it’s kind of a special thing that you do have to bring to the party is the ability to kind of create all that by yourself.

I felt like when I was doing my best job, I offered them many choices in the way I would read a line so that then when they go get Dane Cook’s reading of the line, they go, oh he was a little, aggressive here, so let’s use her more aggressive take here. Or he was softer here, so let’s, let’s use her softer take, and it just gives them more, creativity in being able to tell the story, which, you know, so, yeah, so that’s how it works.

I do know Brad Garrett. Like, we’re friends. We play poker together in real life. So, we’re friends and I know his, his brilliant comedic timing quite well, and his sense of humor, so that was very easy for me to picture, um, and, and imagine. So anyways, it’s usually you don’t get the benefit of getting to work with other actors.

Reporter: Okay, so my question is how is it playing an animated character versus an actress in a movie or on TV?

Hatcher: Well having done a few of them now, and then a little bit of a range, of voice characters in different projects, I think initially, when you sort of imagine or fantasize about getting to be a part of a big Disney movie- at least as I did in, in my acting career before I had the opportunity. You kinda think you’re gonna end up doing some sort of cartoony squirrel voice or something, and which is really fun and would be fun to do.

I think as close as I got to something that was really away from me and very silly was in Jake and the Never Land Pirates. I’ve done three or four episodes of this sort of French, half French, half Russian kind of pirate and really, really fun and funny and I enjoyed that. But the two major things I’ve done which is this movie and Coraline, but since we’re talking about Planes, I think I get cast or was cast because Mr. Lasseter and, and Clay, they were looking for an authenticity, a realness- the rounded sort of emotion in this journey that Dusty takes. And I think, to that end, they just wanted to be real. I remember reading the lines back and forth in one recording session with John himself, and he wanted to actually come in the booth and read the scenes with me because they just wanted as a close to what you can imagine if you were filming a scene as a life actor and not an animated character.

They wanted it to be like that. So in this approach, I think, for this character- for Dottie, I’m being as authentic and trying to be as persuasive, and as empathetic, and listening, and just feeling from the emotions all the same sorts of traits in a character that I would have if you were filming my face and my body. The sort of, divergence, I guess, is that I get to show up not in hair and makeup; not worrying about any, any physicality, and really just, relaxing into my voice, and just trying to tell the story through my voice.

But it was all very real and all, I remember at one point like John and Clay were sort of, “We wanna cry at the end of the scene.” and it’s not like you can set out as an actress to make somebody cry, but what they meant was they just wanted the stakes to be real in the same way that you would do that if you were acting in front of a camera. So I’m sort of saying my choices in this specific thing were not that different because of the nature of who Dottie is in this movie.

Reporter: Hi Teri. Can you share with us your favorite part of Planes?

Hatcher: It’s hard to say because, clearly, the movie is so gorgeous. It’s just so beautiful and every time I look at scenes from it, I just can’t get over the craftsmanship. How do they create this world that just draws you in? They’re not people, but suddenly you kind of let all that go and you just are in this story, and it’s so beautiful and so magical.

So I love everything in it, but I think, my favorite scene for me and what just makes me laugh all the time, is the scene where Dottie is first telling Dusty that he can’t fly, and then she just sort of does this demonstration of what’s gonna happen to him if he does fly, and  he’s gonna go to the ground and smash all the kids in the orphanage. And, it makes me laugh and when I watch it with a group of people, everybody laughs, and so I guess that’s one of my favorites.

Special thanks to Teri Hatcher for taking the time and to Disney for making her available.

Inspire Your Kid to Make Movies at Special Effects Camp