1. What is this movie that you speak of, Planes?

Dusty, voiced by Dane Cook, is a crop dusting plane who dreams of competing in an international world-wide aerial race. He is also afraid of heights. With the support of his mentor Skipper (Stacy Keach) and a host of new and old friends, Dusty does just that.

2. Is this just Cars, but with planes?

Would that be a bad thing? This is just “like” the Cars movies, yes — because it takes place above the World of Cars. Yes, it is very similar, and that is a good thing. There is a race and there are talking inanimate objects and of course there is John Ratzenberger.

YES! They will love it. If they have enjoyed the Cars movies, then they will really love it. It’s Disney! It’s animated racing planes with funny voices from all over the world. There is even some war action! 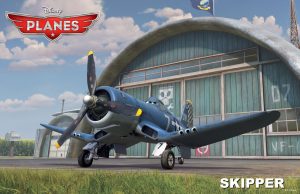 4. Wait a minute; war action? Will it be too intense for my kids?

There is a flashback scene to a quick skirmish in World War II. It is not too intense, but at the same time, it is shooting at movie characters. The scene is portrayed delicately, but parents should be prepared.

5. I have really young kids and I want to skip anything intense. When should I take them to potty?

Good question. If you want to skip that scene [SPOILER] It happens when Skipper admits what happened to him during the war. [END SPOILER] It is about 1 hour into the movie. 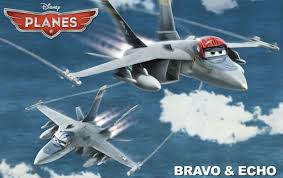 If you enjoyed the Cars movies, then yes. I enjoyed it as much as the first Cars movie. It is also refreshing to see something “new” but in a familiar setting. Of course, the cameos and easter eggs are great also. Best cameo in the movie is Val Kilmer and Anthony Edwards (both Top Gun) as the fighter jets, Bravo and Echo!

7. Is there anything after the credits that we should stick around for?

The screening I went to did not even have the credits finished — so I do not know. However, this is Disney: probably going to be a great stinger after the movie.  First person to let us know in the comments section below, will get credit for the update here in #7!

UPDATE!: The end credits show a first look at Planes: Fire & Rescue, set to be released theatrically July 18th. – Thanks to Mark and Variety!