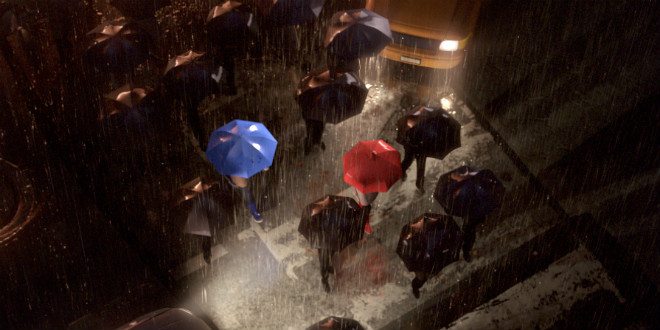 If you’ve ever walked through a big city in a heavy rain, the first words that came to your mind at the time were probably “messy” and “dirty.” After seeing The Blue Umbrella, the short film that precedes the new Disney/Pixar movie Monsters University, you might just find yourself thinking “beautiful,” or even “magical,” the next time it happens to you. 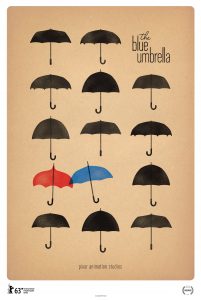 To call The Blue Umbrella visually striking would be a grave understatement. Revolutionary would be more like it, and that’s not a term I toss around casually. I could easily expound on this for several paragraphs, but I don’t want reading this article to take longer than watching the short, so I’ll keep this brief: Bookmark this article, and come back to it after the movie to verify that it says what you thought it said, because after you see The Blue Umbrella you will not believe it: The short is completely, 100%, animated. Honest, it is: I heard it straight from the man who directed it, Saschka Unseld, when I visited Pixar back in April.

Let me back up a second and tell you that The Blue Umbrella is about the adventures of the title character as he(?) strives to meet a red umbrella — but, more than that, about a city coming to life when it rains. To say much more than that would spoil, if not the plot per se, then the joy at discovering its surprises for yourself, so suffice it to say that finding faces in inanimate objects is key. To understand the effort they went to to make the visuals seem utterly realistic, witness what Unseld had to say about the process:

Everything kind of tells a story to it. And a big, big struggle in the beginning was getting people to change how they work. Like, it was amazing how much people are used to doing things in a more stylized, cartoony way. The first version of the mailbox, which you see in the beginning: We gave photo references to the modeler to build it. Relatively straight forward, you would think, and then we looked at it, and it was, like, somehow this looks, doesn’t look real. Something is wrong. It was really hard to tell. And we had to really look into the details, and it was… The size of the screws were slightly too big. Um, it was the way since a mailbox is made out of this kind of folded metal, the sharpness of a bend has certain physical restrictions.

And that was just wrong. It was like all these details that are based on a manufacturing process of these things, or how thick something is, or all these things were slightly off, and all that gave the overall picture of this doesn’t look real. So a lot of it was figuring out, no, why are certain things in a certain way, and kind of making people not… So much of what you do is kind of, this is how I used to do it the last 10 years, and you’re not even aware of it.

The other big question you’re likely to have about The Blue Umbrella is: What city is that? And the answer is, essentially: several of them. New York City’s wide sidewalks are clearly in evidence, and Unseld said that there were lots of bits of San Francisco (unsurprising as it’s across the bay from Pixar’s headquarters). He also said that many of the individual shots of buildings were taken from various cities around the world, including Paris, that he found in test shots that others at Pixar had taken. One detail he mentioned about the filming process that I loved was about the various faces:

[T]he very first one on the, on the sidewalk. Um, we called her Lisa. They actually have all names because you couldn’t say, like, “You know that weird metal thing in the 15th shot?” They actually all have names. Um, so Lisa is two blocks down from where I live. And Lisa was part of a test I shot on my iPhone as well.

So, how is The Blue Umbrella, aside from visually astonishing? Brilliant, really – right up there with the very best of the Pixar shorts. It continues the tradition of having no dialogue spoken during the film, though a sharp eye can spot a word or two in writing here and there. Honestly, even if Monsters University weren’t a terrific film in its own right (and check back here on GeekDad for my review later in the week), it might be worth paying even the exorbitant ticket prices theaters are charging these days just to see The Blue Umbrella. You’re in for a major treat. (See the bottom of this post for a short clip from the film.)

All travel expenses for the #MonstersUEvent were covered by Disney (Happy Birthday, Marshall!), but I received no other compensation. All opinions expressed here are solely my own.

Why The Hobbit: An Unexpected Journey Didn’t Creep Me Out