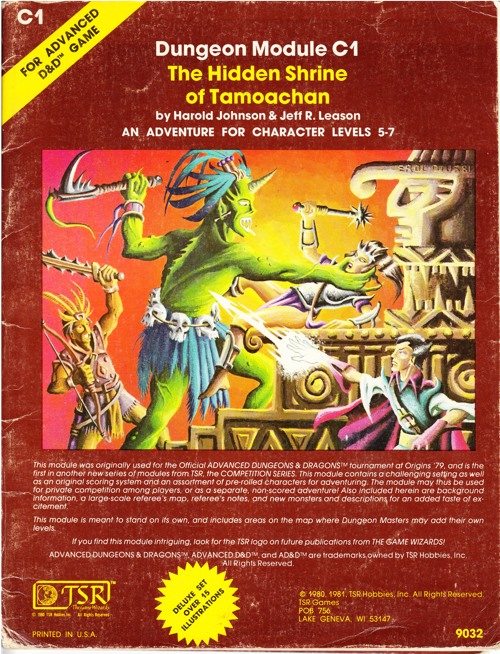 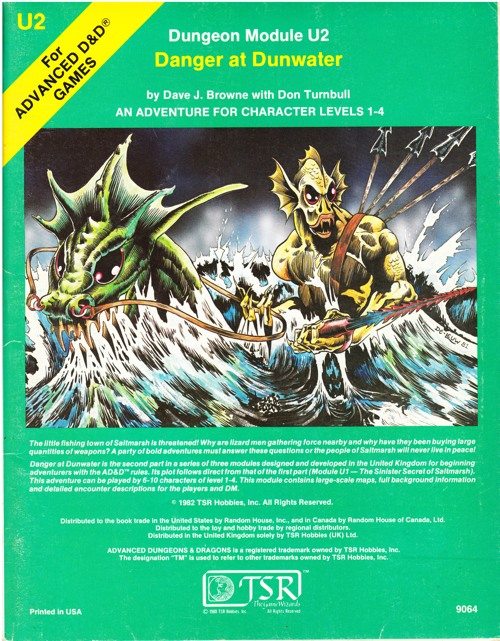 We were digging through the storage shed recently, when I should chance across the dusty stack of old Dungeons & Dragons modules I’ve had with me for… well, for a very long time. For all the GeekDads who have gamed, as I scan and read through these, I’ll post them for for your enjoyment and comment, if you remember them.

We’re onto the third set now, and this time we’re going for a little depth. Not necessarily the flashy, famous modules, but fun ones that we probably all played at least once on the way to something bigger. First off, U-1 The Sinister Secret of Saltmarsh.

Four miles east of Saltmarsh, just inland of the old coast road and looking out to sea, stands the Haunted House.  Until twenty years ago it had been the residence of an aged alchemist/magician of sinister reputation, and even then had been shunned by reason of its owner’s mysterious occupations.  Now, two decades after the sudden and unexplained disappearance of its occupant, the house had acquired an even greater air of evil and mystery with the passing years.

This was, to put it succinctly, the Scooby Doo episode of D&D modules.  Instead of a good old dungeon crawl, players got to explore a big old spooky house, and deal with all sorts of annoying wandering monsters, as well as traps and illusions.  And then, if they made it though?  Ghost Ship!  All it needs is a glowing guy in a deep-sea divers suit, and a chase-sequence with a cute pop-song!

hings to remember about the Sinister Secret of Saltmarsh:

But wait, there’s more! Once you solve the secret, you get hired by the town council to go on a lovely sea cruise. The best thing to get out of your raid on the Sea Ghost is, if you can figure out a way, talking the Pseudo-Dragon into becoming your magic-user’s familiar. I mean, Pseudo-Dragon, people! Hello!

C stands for Challenge, and that’s good enough for me!

C1 The Hidden Shrine of Tamoachan was created as a tournament module, and actually has scoring rules to it, but that’s not important now. What’s important is cool Mayan-influenced mythology, letting us all play Indiana Jones with swords and spells.

Your party is lost! You should never have abandoned the ship and struck out into the marshes, but your pursuers were closing in on your trail, and it seemed the only way. A full moon rises, sending moonbeams and ghostly shadows to flicker through the branches. Ahead in the woods a light glows and seems to beckon – perhaps a shelter for the night. Though thorns tear and impede your progress the source of illumination is reached at last. Before you is a clearing. There is an ancient ruin- a worn and overgrown pyramid fills the courtyard, shining in the moonlight, seeming almost brighter than the moon itself. A refuge? Perhaps; tomorrow with daylight the party may explore, but tonight you must have rest.

As a tournament module, it has a very specific set-up, and pre-rolled characters in the back.  Of course, if a DM wanted to run a group of existing characters through, that could work as well. The whole thing was only supposed to take two hours to finish, but come on- it usually took us longer than that to agree on the pizza we were ordering.

Things to remember in the Hidden Shrine of Tamoachan:

Basically, the whole dungeon is trap-o-palooza, and it’s really important to listen, pay attention, and always assume that when something looks too good to be true, you’re probably dead already, so go ahead and grab it. And now, more pictures!

A Kickstarter Campaign for Programmers and Non-Programmers Alike: VΔDelta

4 thoughts on “The 10 Best Classic D&D Modules I Ever Played #4: Mystery, Incorporated; Rumble in the Jungle”