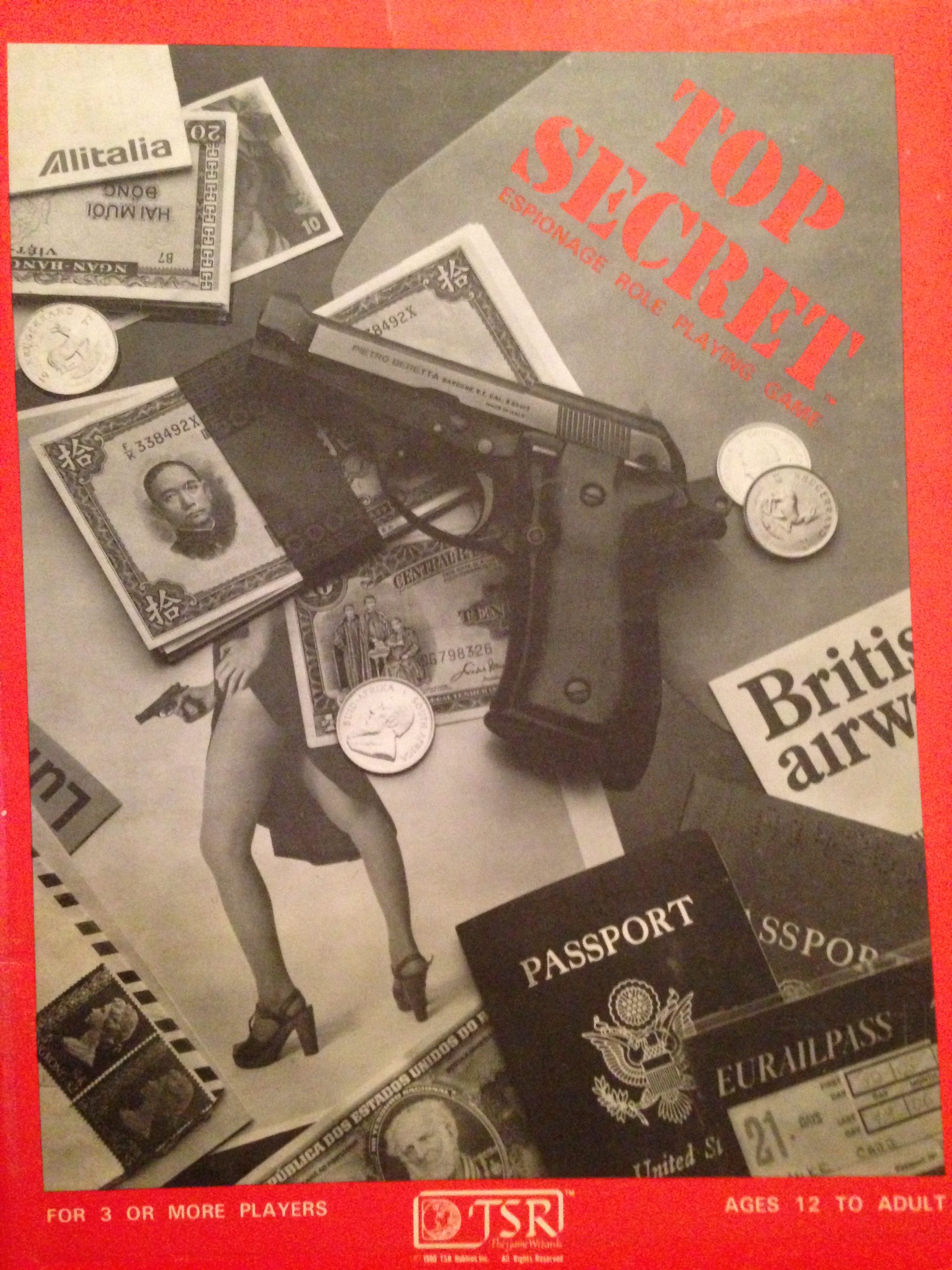 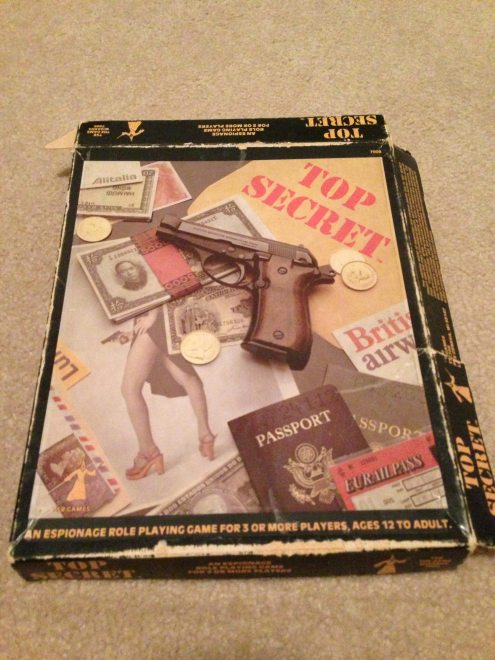 A few weeks ago I wrote about my move to my new office and a special shelf I set aside to hold some of my old gaming memorabilia. It’s got a mix of D&D modules and manuals, boxed games, and much more. I’ve been slowly going through boxes that I packed away years and years ago, and I’m still finding surprises. I knew I had a very special old boxed game buried somewhere, and I went on a mission this last weekend to find it.

I found it… plus a few extras that I’d totally forgotten about.

The game is Top Secret. 1981. Seventh grade. Inside were a couple of d10s (if I remember correctly — they’ve since been lost), a 64-page B&W manual and a 28-page module titled Operation: Sprechenhaltestelle (“The Place Where Speaking Stops”). Players take the roll of secret agents with the Administrator (game master) running operations. Just as with D&D, players would roll for attributes that include Physical Strength, Charm, Willpower, Courage, Knowledge, and Coordination. Secondary traits included Offense, Deception, Evasion, Deactivation, Movement Value, and Life Level. The game was based on 1-100 percentages — no d8s or d20s needed. Players could fill in the Agent’s Dossier with plenty of other personal details such as height, weight, national origin, languages spoken, and more. 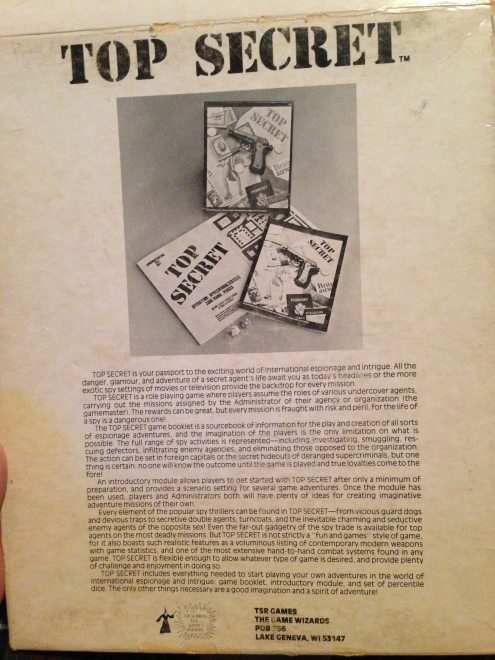 Top Secret did have leveling, but it was really a number that was used as a multiplier for obtaining a pay-out for successful missions. Experience points were earned, including bonuses for performing jobs (such as stealing) that matched your agent’s department. Interesting enough, the equation for getting paid was as follows:

A was the agent’s level, H was the target’s level (if the target wasn’t a human, H = 1), D was a random d10 roll value, and P was the Base Mission Payment (with a B bonus of $25 if the job was related to the agent’s department). Money was important to agents — it was really the only way you could upgrade your weapons, special devices, and even your own hideout or base. (Did you know that in 1981 bulletproof glass was apparently only $25 per square foot?) 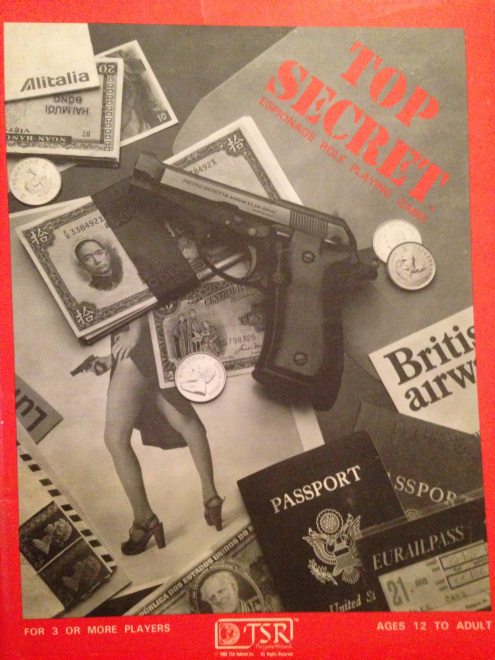 With a 64-page manual, there wasn’t a lot of room for complex rules. Combat was fairly straightforward, and involved percentage rolls against your agent’s various traits (such as Evasion or Movement Value). Short-and-sweet rules were provided for vehicle chases, boxing, sword fighting, and poison and animal usage. The back of the manual had a cheat sheet with Sequence of Play, First Shot determination rules, hit modifiers based on wounds and movement type, and even automatic weapon fire that had an increasing penalty as more and more shots were fired. Still, Administrators were only given enough information and guidelines to follow a fairly simple campaign structure, and I can recall having to make many a ruling on the fly. 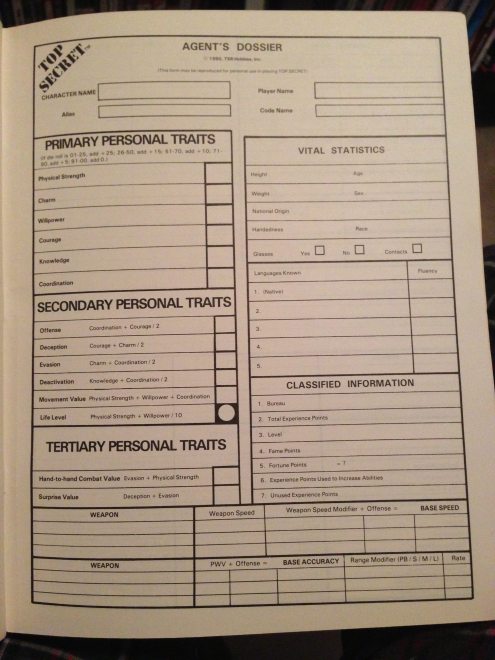 The Sprechenhaltestelle operation was not only a great intro operation, but it also became a popular mission to run over and over again. Existing in a non-specific European town, this section of town was like Rick’s place in Casablanca. It is a playground for spies and defectors, with information being sold and traded, deals being made, and lots of bullets and knife fights. This first operation (numbered Administrator File 001) had the players given one primary mission (of three) of locating two kidnapped energy specialists being held in the hopes of finding a country willing to purchase them for their knowledge. But what was so great about this operation was that in addition to the three primary missions there was plenty going on for return visits. The section of town the players would roam consisted of rooftops, ground-level, and below street level areas. An administrator could always find a way to incorporate Sprechenhaltestelle into any mission, allowing players to purchase exotic weapons, hire freelancers, and much more. (As a matter of fact, Sprechenhaltestelle was the first stop for my players before beginning the Doctor Yes mission I’ll talk about shortly.) 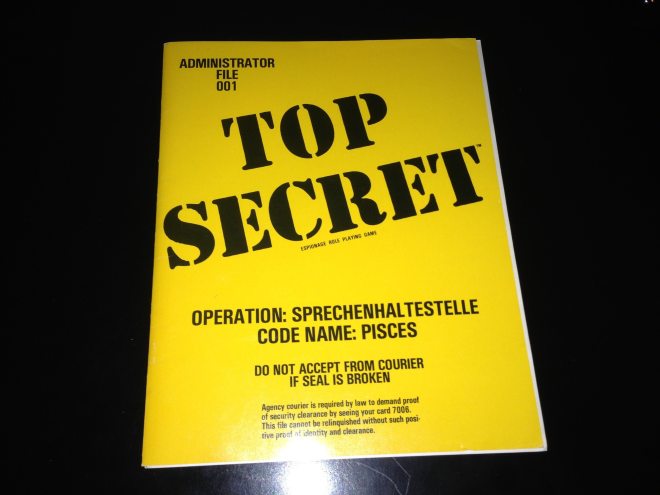 There were apparently only seven official missions released by TSR, Administrator Files TS001-008, with TS007 being the Top Secret Companion book that provided additional rules and resource material. I only ran Sprechenhaltestelle but I did manage to play as an agent (a rare occasion) for two of those other operations — one of those involved us (the players) boarding a ship to rescue some hostages. I only remember just having a crazy amount of fun having a gun fight in the engine room. 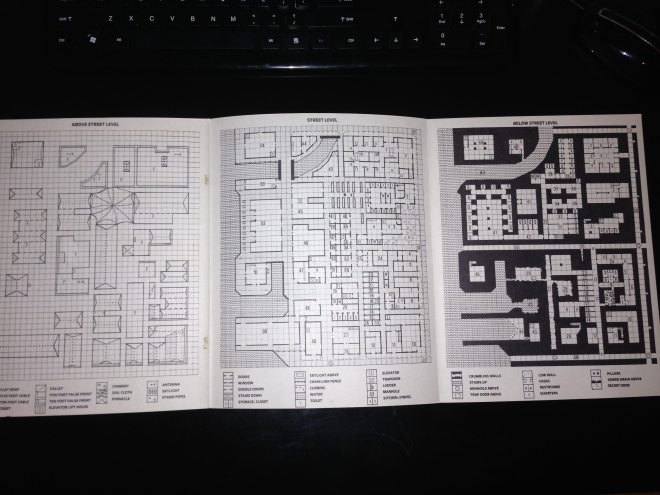 While there were only seven official missions from TSR, Dragon magazine did manage to provide some additional missions over the years. Tucked inside my busted up Top Secret box were two fun little surprises that I’d totally forgotten about. Top Secret was created by Merle M. Rasmussen, and on page 40 of the original rule book were some small images of a secret base (an anchored artificial island base anchored to keep it from drifting) drawn on graph paper. For quite a while, this was just a sample glimpse of notes in the manual on creating operations, and there was only a very short description for these small top-view and side-view images:

In this scenario, a master criminal is producing counterfeit currently with which to flood the world’s economies. He has let his location be known and has set a trap… agents can attempt to enter the complex by water, land, or air. The master criminal waits deep inside his deadly labyrinth for the highly suspicious prey…

It was a major tease in the manual that was never completed. Why was there a helicopter in one of the rooms? How would agents ever hope to make a land-based attack with those periscope cameras and gun emplacements that tracked movement? And was that an escape mini-sub on the lowest level? Well, Mr. Rasmussen (along with James Thompson) provided all the answers along with a great adventure in the April 1981 issue of Dragon magazine. Doctor Yes: The Floating Island Mission was a 15-page operation, complete with background info on the villain, additional floor plans for the missing levels (6 levels in all, plus the island surface), and lots of surprises. It was a fun adventure to run. (What I love best about it was the pre-computer graphics — the hand-drawn levels would never fly in today’s polished gaming world, but in 1981 the bird’s eye views of each level really put players’ imaginations to the test as well as the Admin’s story-telling and description-telling skills.) 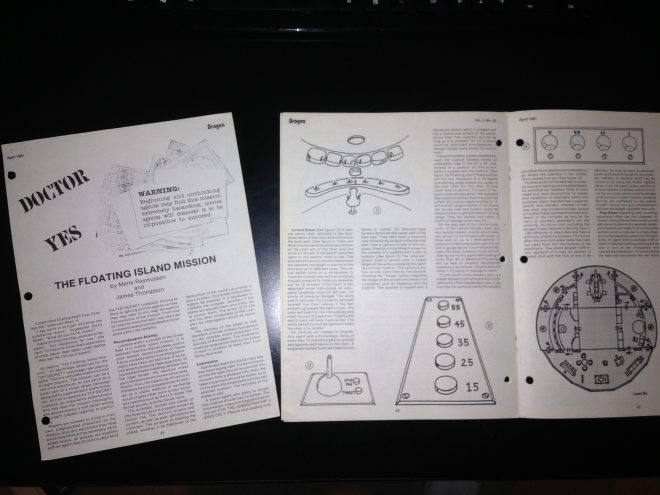 I found another Dragon operation that, unfortunately, I never did run. It was from the June 1982 issue, and I seem to recall at that time most of my fellow gamers had moved (briefly) to playing Star Frontiers. This operation was called Chinatown: The Jaded Temple, and it tasked the agents with locating a hijacked radioactive isotope, Dragonium. (Yeah, that’s right — Dragonium.) It was a short mission — only 10 pages. Maybe one day I’ll get to run it… 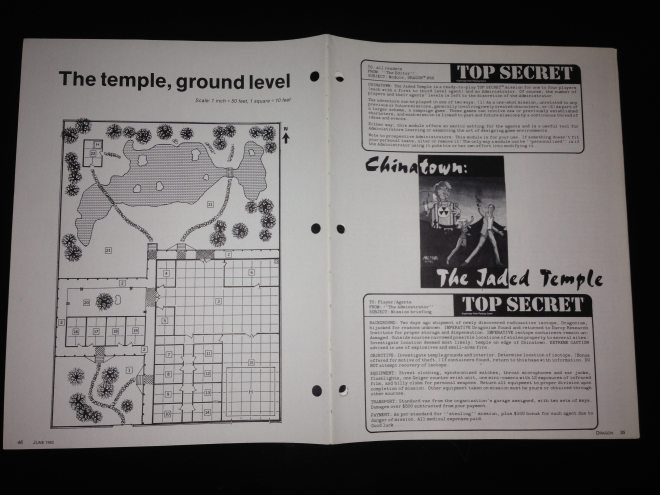 Top Secret was obviously never given the same attention as big-brother, D&D. It honestly probably never had the sales given the subject matter. There was a later version released called Top Secret:SI (Special Intelligence) that attempted to refine rules and upgrade the overall gaming experience, but I never investigated it.

Top Secret was a fun, enjoyable experience while it lasted, and I loved that my gaming friends were open to trying it out. I can imagine that our young ages probably kept the missions somewhat simple (given our lack of worldly experiences and overall understanding of the world around us), and we were just reaching an age where James Bond movies were making sense, sports cars and women were both out of reach, and the idea of having an alter ego was very appealing. 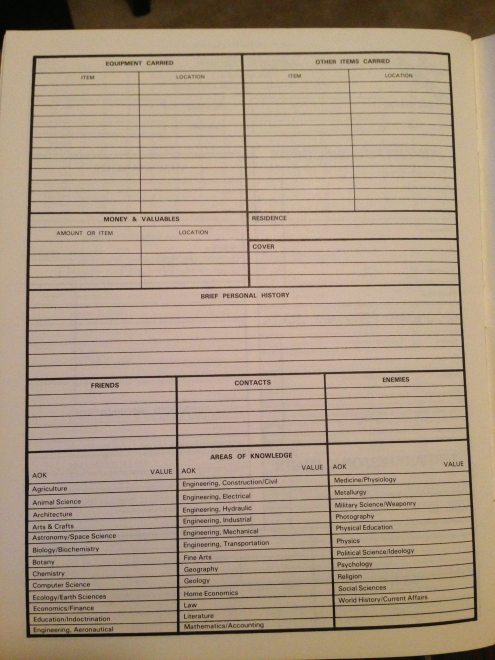 Top Secret is going on the shelf. Everything fits nicely in the now-repaired box (use wood glue and clamps to repair those torn edges — wood glue bonds well to the paper and strengthens the corner) that is sure to bring up more good memories with a single glance.

Randomize Your Dungeon in Front of Your Players