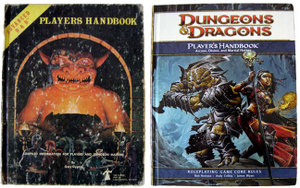 Like most of us who grew up geeky in the heyday of Dungeons & Dragons, I spent a fair chunk of my adolescence doing epic battle with orcs, giants, and the occasional Beholder in search of fame and/or fortune. But as the years wore on, I found myself moving to other flavors of tabletop gaming before the responsibilities of adult life ultimately devoured that portion of my free time. Still, with the buzz surrounding the recently released 4th edition – a system that, I might add, is being expertly reviewed by GeekDad John Baichtal – I decided that I owed it to myself to dive back in.

With my shiny new Player’s Handbook at the ready, I trekked into the attic to locate my trusty dice. Obviously, I rolled a natural 20 on that particular perception check because, in addition to locating those polyhedrals, I also spied my well-worn copy of the classic AD&D PHB, circa 1978.

Hit the jump to get nostalgic.

Despite the fact that my childhood friends and I learned to play using the 80’s Basic Set (before finally graduating to AD&D 2nd edition in our teens), this musty tome was the first Dungeons & Dragons title I ever purchased on my own. I picked it up used at a local second-hand book store for what was, at that stage in my life, a small fortune: a dollar. It didn’t matter much that the book was less than compatible with the current house rules, only that it was mine to explore as I saw fit.

While leafing through its yellowed pages – packed with exactly the kind of violent, demonic imagery that got the franchise in such hot water in its infancy – I couldn’t help but notice how different it seemed from its contemporary. Our modern handbook is sleek, colorful, and beautifully illustrated, as opposed to the flat, monochrome, cheesily accompanied sheets of its predecessor.

Let’s compare and contrast further, shall we?

Overall girth:
The 70’s handbook, at a scant 128 pages, is dwarfed by the 320 page 4th ed. behemoth. Hefting the older volume feels, dare I say, insubstantial by contrast.

Races:
In 1978 there were 7 distinct races: Dwarf, Elf, Gnome, Half-elf, Halfling, Half-orc, and Human. Now we’re looking at 8: Dragonborn, Dwarf, Eladrin, Elf, Half-elf, Halfling, Human, and Tiefling. (As much as I’d like to bellyache about the loss of Half-orcs and Gnomes, I’ve got to admit that dragon-men and demon-ladies are a bit more ostentatious, and probably have a significantly higher level of appeal to newer players.)

Classes:
Counting sub-classes, this classic handbook boasts 10 player classes. Now we’re pared down to 8, but, as John pointed out, things seem to be a bit more balanced with regard to their power, particularly at low levels.

I could go on and on about how things have changed in the last three decades, but the crux of my musing is that despite all this shuffling of rules and, some would say, reinvention of the wheel, D&D is still very much D&D. You roll some dice, you make a character, and, hopefully, you have the kind of fun that you can fondly look back on years later.

While I find myself getting slightly misty-eyed for forgotten gems like alignment graphs and THAC0, I also see the beauty of simpler, slicker, more modern modes of play. But at the same time, I wonder if it wasn’t the ridiculous level of inherent research and dedication to the craft such stodgy old mechanisms required that so endeared folks like me to the tabletop experience.

Still, I understand that this structural reboot was done with the players in mind. Wizards of the Coast looks to lure in new gamers (and us backsliders) while still remaining true to the spirit of Dungeons & Dragons. I can still play my Halfling rogue, my buddy Brad can still sling Magic Missile (now located on page 159, as opposed to 67), and newbs can take a Dragonborn Warlord out for a test drive.

In the end, if 30 years from now some other crusty old gamer geek finds a copy of 4th edition in his attic and waxes nostalgic about Keep on the Shadowfell, then we’ll know that this newest iteration has done its job.