Welcome back to Word Nerd, where we ask the question, “are you sure that’s what you’re trying to say?”

As you may have guessed, the words that I choose to appear here are the ones that pop up most often on Facebook, Twitter, and message forums. Here is a pair that I see all the time.

Faze: to disturb or upset
Phase: a distinct period in a process of change; to carry out something in gradual stages. 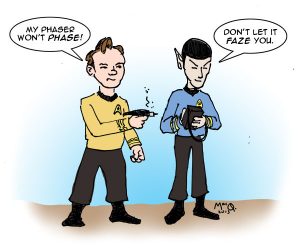 The first one, faze, is from the Middle English word fesen, meaning to drive away or frighten.

The second, phase, is from the New Latin phasis, which comes from the Greek, phainein, to show; it originally referred to the appearance of a star, phase of the moon, but today it refers to any transition or sequence of steps in a transformation. Interestingly, the word “fancy” comes from the same root.

If you say “it doesn’t phase me,” you’re saying that the thing in question will not transform you in some way.

If you say you’re “going through a faze,” you’re saying that you are currently upset about something, but it will pass.

GeekDad Puzzle of the Week Answer: That Darn Achilles

Someone at USA Network Finally Understands Why We Watch Burn Notice