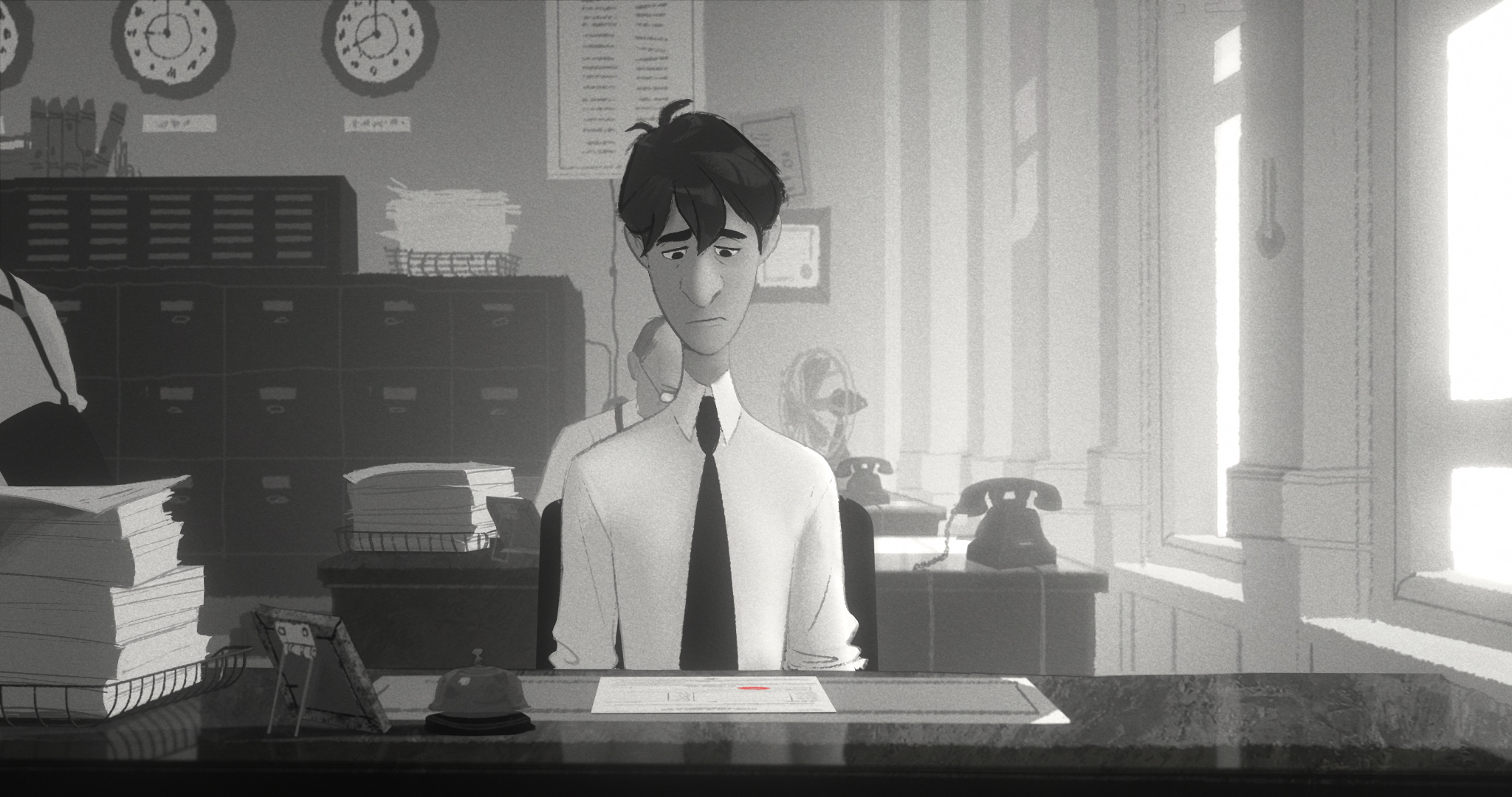 For the first time since 1990, Disney Animation has created an animated short to accompany a feature release (the last time was Mickey Mouse in The Prince and the Pauper, released with The Rescuers Down Under). The film, titled Paperman, which will screen with Wreck-It Ralph, is an incredibly charming little film that also showcases a revolutionary animation technique. Told entirely in pantomime, Paperman is slightly reminiscent of the beloved classic The Red Balloon in the seemingly-sentient actions of inanimate objects.

The story concerns an ordinary guy who works at an ordinary job, schlepping himself into and out of the city on one of the daily commuter trains. One windy day, he has an accidental encounter with a nice young lady, who then boards her own train and vanishes out of his life almost as soon as she entered. Saddened by this near brush with what-might-have-been, the man later sits dejectedly at his desk looking at the huge stack of forms the boss has just dropped in his in-box, until he happens to glance out the window and discovers to his surprise that his dream-girl is at that moment sitting near the open window in the building across the street. He waves, to no avail. She hasn’t seen him. Desperate to get her attention, he turns to the stack of paper in front of him, quickly crafting one paper airplane after another and hurling them from the window, hoping to get just one of them across the street and into her hands. What happens next is wonderful, sweet, charming and magical in the best sense of the word.

What makes Paperman unique is the technology that went into it; for the first time, Disney has merged classic hand-drawn 2D animation with 3D Computer-generated art within the same character (previously they have used CG for vehicles, architecture and inanimate objects in traditional animation); in Paperman, the characters are modeled in CG and rendered in high contrast to create the modeling and shading, then merged with hand-drawn linework using a proprietary software program called Meander to create the final result. It looks like traditional “classic” animation but with a sense of solidity and volume that’s more common to CG films.

In an interview, Producer Kristina Reed explained how Director John Kahrs came up with the story of Paperman, saying “This idea came about early on in his career. He was reverse commuting; he lived in New York City and he was working at Blue Sky, which is out in the suburbs of New York, and every day he’d be traveling through Grand Central Station as a single guy in his 20s, and there’d be throngs of people moving through the train stations. And he would be thinking to himself, ‘why am I not having a more happy life? Like, I’m a single guy in New York City. I should be on top of the world. And yet I feel really rather lonely.’ And every once in a while, he’d make a connection with somebody, eye contact in the station and think ‘is that the girl of my dreams?’ And then she’d be gone. This short came about from those times.”

“Where I got involved was just speaking about the methodology of it,” she says, “that’s what really drew me into the picture, to be totally honest.” Reed, who previously had been at Dreamworks, became head of production at Disney in 2008; Disney, which had previously abandoned hand-drawn animation during Michael Eisner’s tenure, was returning to the art with The Princess and the Frog, while simultaneously producing the computer-animated film Tangled. Reed says, “we were having a lot of conversations among the executives about, were we thinking about this properly; we sort of had this line going down in our crew, and we had separated our hand-drawn talent from our CG talent, and just, was that the right way to be thinking of things? It was like being in two different businesses and neither business was quite as smooth as we wanted it to be. I mean we’re having to come up double the amount of content to feed both pipelines, et cetera.”

Reed continued to push for a more cohesive approach to animation at the studio; “There was this notion of we’re the only studio in the world that has this breadth of talent; is there something we can do by actually matching them together? Is there some new place we can go visually that no studio has gone before?” When John Kahrs pitched his Paperman project, it seemed a natural fit for Reed’s campaign; she explains, “since I had been kinda pounding on the table and saying ‘there’s more, there’s more to this, we’re not thinking about it the right way,’ everyone sort of turned to me and said ‘you produce this one,’ which I was thrilled to do.”

Reed described the process of going back and forth between the computer-generated and hand-drawn elements of creating a character, she talked about her own experience in animation, saying “John, the director and I, we’ve spent over 20 years working in computer graphics, and when we both came to this company, ’round about the same time, we were both blown away by the ability that line artists have to put expression just in a single line; just how by lifting a lip up a little bit or turning an eye, there’s so much expression that can be conveyed. And when you’re trying to do that in the CG world it’s really, really hard, and you get very separated from the actual art. There’s a lot of different people left to come in and set up the model and do the rigging inside the model and get her eyelids and her eye lashes right, and it’s very intricate and complicated. But in hand drawn work, it’s a line. And there’s just this beauty to that that neither John nor I have been exposed to.” It was this simplicity and expressiveness that they worked to capture in the film. 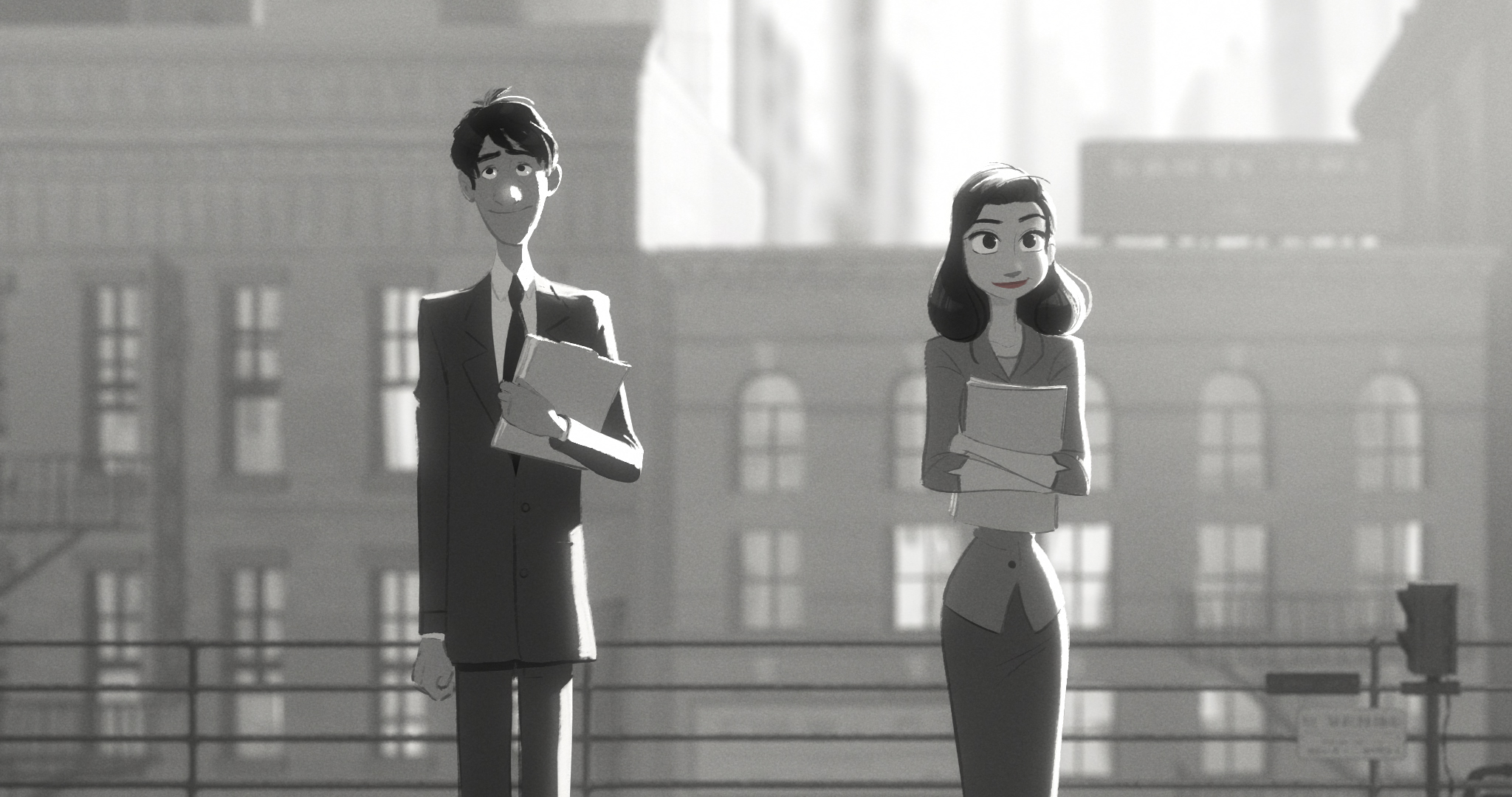 One of the artistic choices John Kahrs made was to set the film in the middle of the 20th century and make it in black and white; Reed explains, “He knew from the very beginning that he wanted it to be in black and white, and he was very entranced by the black and white photography of New York,” Reed explains, pointing out that the cityscape serves as a visual metaphor for the lead character’s isolation, “the idea of these skyscrapers as sort of canyons and valleys and that you as a human being are just sort of working your way across this sort of inhospitable landscape, surrounded by lots of people but very much alone, unless you find someone in the world that you can connect with.”

Paperman took about 14 months to complete, but the schedule had more to do with the availability of artists than any inherent difficulties in production. Reed explains “one of the things about making a short at Disney Animation it has to fit in the cracks between our big features, so for most of the project, there were never more than 10 people on it. And then every once in a while, we’d get a phone call and it was like, okay, there’s ten animators available for six weeks; what can you do with them? And so we’d scramble around and figure it out and bring them all onto the show and have them work. And then they would go away again. So, in all there were quite a few people that touched it, but there was really a small crew of us that are the core of the project.”

Disney is continuing to develop the hand-drawn/CG hybrid technique, Reed says. “We feel honestly like it’s somewhat our responsibility as one of the premiere animation houses and certainly the house that invented this art, to put new visual looks out into the world for other artists to respond to,” she tells us, “we feel there’s a vast frontier out there that is not just hyper-real CG, which is sort of where a lot of animation’s going right now. There’s nothing wrong with that. There are many stories that that form can tell very effectively. But it’s also partially responsibility to our roots; we feel like we want to make sure that we’ve explored every avenue of artistry that we can with the talent that we have.” Reed gives a hint to future efforts, stating, “John is moving on to test this technique in color, ’cause it’s very easy to say, ‘whoa, that’s a cool technique, but it really lends itself to the story and only stories in the ’40s and only stories in cityscapes,’ so he is going on to try and test foliage and color and see what that technique will look like and telling a different kind of story, and we’ll see where that goes.” 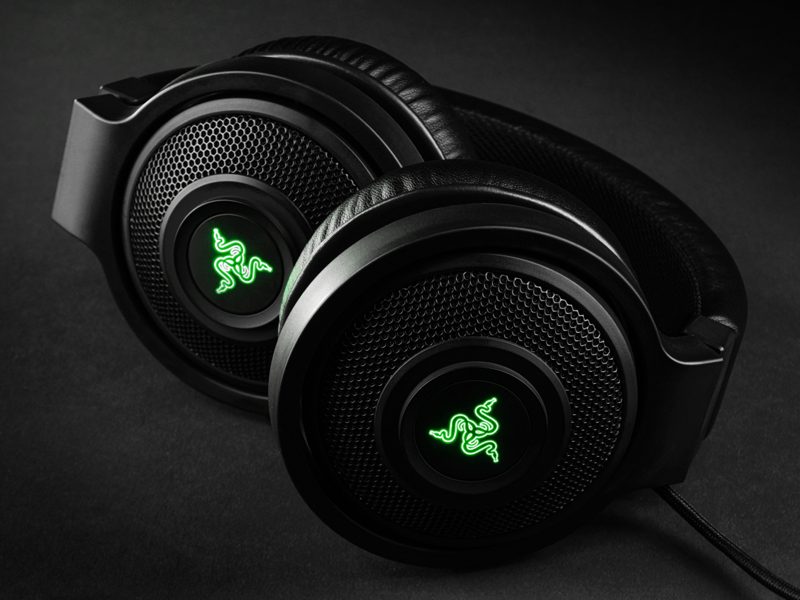 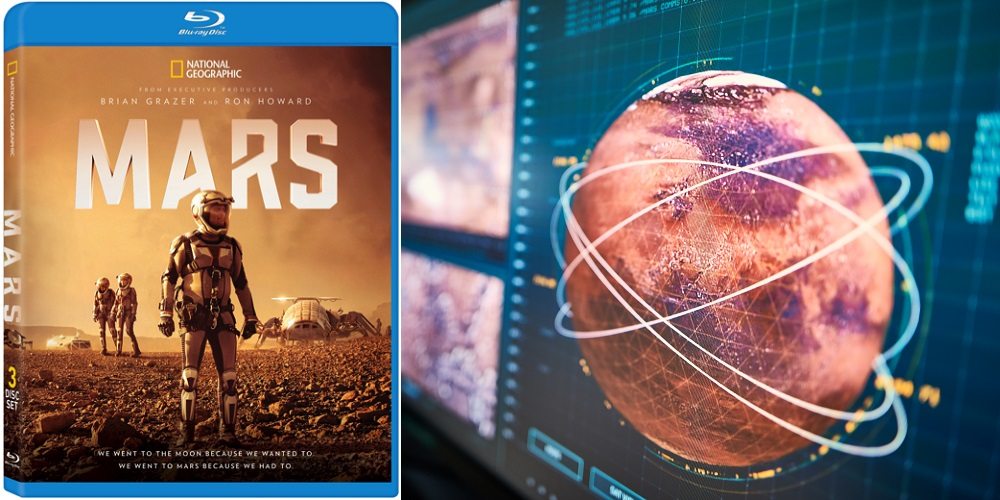