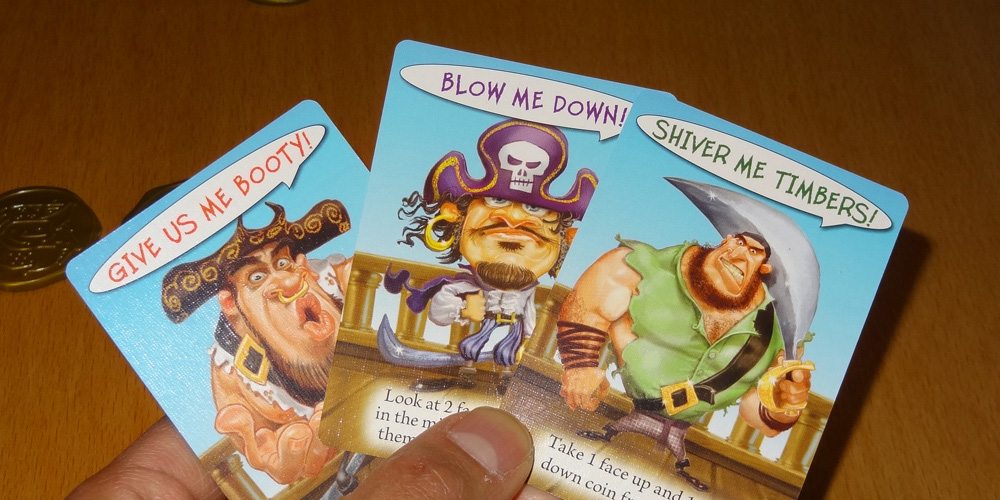 Overview: If you like talking like pirates, Scallywags is a quick-playing family game of “pirates and plund-arrr” from Gamewright. 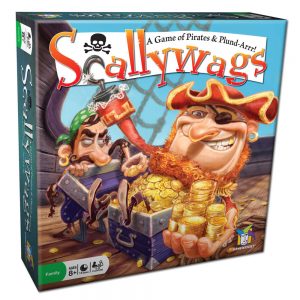 Theme: Pirates and gold. There are little irregularly-shaped “gold” coins, lots of goofy pirate illustrations with names like “Blow me down!” and “Yo ho ho!” There’s not necessarily a direct connection between the name of a card and what it does thematically, but you probably won’t mind.

The game comes with 54 cards and 40 plastic coins. The coins have the Gamewright logo on one side, and a value on the other (skull=0, 1, 3, 5, and 8). The gold-colored coins are a nice touch and my kids definitely like them, but they can be a little hard to read, particularly from across the table. As you can see in the photo above, it’s hard to tell if you’re looking at a 3, 5, or 8 from a particular angle. On the other hand, it means that when you pick up a face-down coin to peek at it, it’s harder for other players to “accidentally” see what it is.

I do wish the box were one of the smaller pocket-sized types, because it’s an 8″ square box for a pouch of coins and a deck of cards. I’ve just kept the plastic bag for the coins and I’ll grab them out of the box if I’m taking them somewhere.

Setup is very simple: deal everyone 3 cards, and then dump all the coins in the middle, spreading them out so there’s just one layer. Important: do not flip any coins over! They stay as they were, face-up or face-down. Also important: as you take coins, you must keep them in order, so other players know what order you got them in. You’re allowed to peek at your own face-down coins, but then they stay face-down.

On your turn, you may do one of three things:

The cards allow you to do things like taking face-up coins, swapping face-down coins with another player, or peeking at two face-down coins and giving them to opponents. There are also cards to steal coins from other players, either into your own stash or back into the middle. And, of course, there’s the crucial “Hands off me booty!” card which prevents a player from taking a coin.

The game ends when each player has exactly eight coins (in a 2-3 player game) or six coins (in a 4-6 player game). Note that once you’ve hit your maximum, you cannot gain any more coins — although you can swap coins or have them stolen from you. Everyone reveals their coins, adds up the values, and the player with the highest value wins.

Scallywags is pretty simple and straightforward, with a lot of “take that” gameplay. The strategy comes in knowing when to give coins to opponents, and also in trying to figure out which face-down coins are worth taking. There are only two 8-value coins in the entire pile, so those often become the focus of the stealing and swapping, but a quiet player can rack up some 5-point coins in the meantime.

The flaw in the game (aside from the difficult-to-read coins) is that there’s no way to get rid of unwanted face-up coins. If you get a face-down coin you don’t want, there are cards that let you swap with somebody else. But if you get a face-up skull, then there’s nothing you can do about it: you can’t swap it or put it back, and nobody is going to steal it from you. Once you max out on your coin count, you may find yourself simply discarding and drawing until the game’s over because you don’t have any cards that will work.

But this is a double-edged sword (so, not a cutlass): the fact that your options are limited when you reach your max coin count limits the length of the game. If everyone were allowed to ditch their low-value coins easily, then the game would keep going on and on. Usually what happens is as people start maxing out themselves, they start playing more cards that give coins to the other players, filling in the stashes with the lowest coins they can find. At any rate, since the game plays so quickly, you’re usually not stuck for too long anyway.

Overall, Scallywags is a cute little game that’s fun for families and gives younger kids a little practice doing some simple addition, and maybe learning to keep a poker face. (My eight-year-old is starting to pick up on this, though now that she’s bluffing about every coin we can still figure her out.) It may not satisfy gamers looking for more strategy, but if you like pirates then it’s a decent filler. 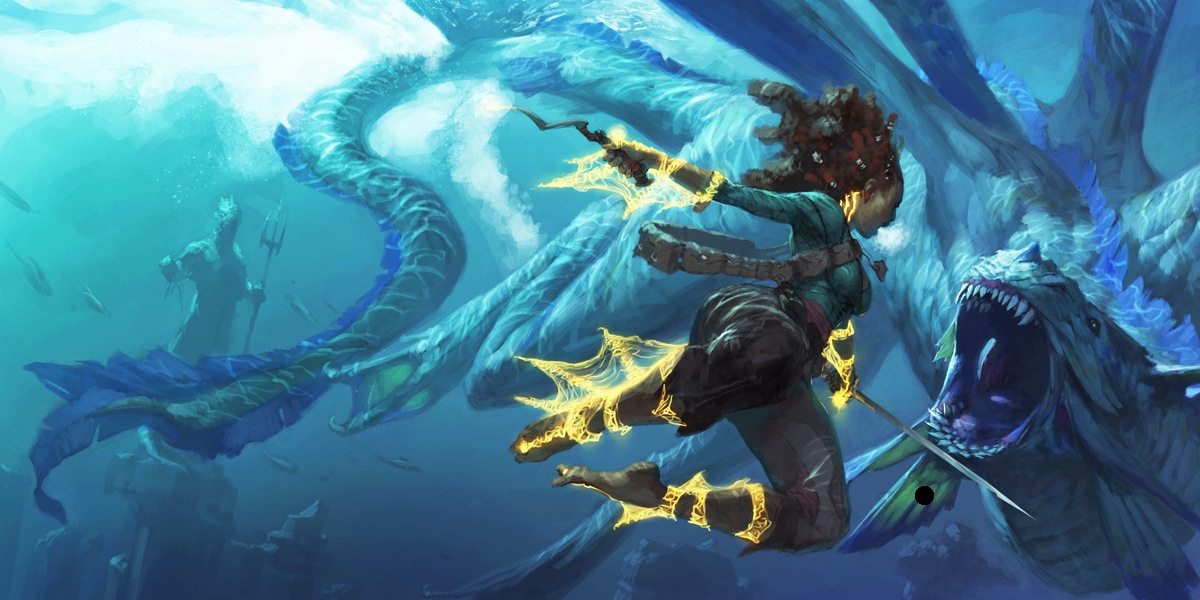 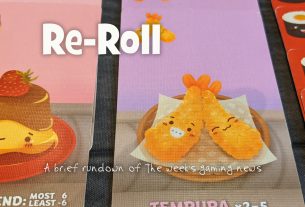