I’m really enjoying being back at the gym. I’ve written recently about how Fitocracy.com motivated me to get back in shape by giving me goals to shoot for — quests and achievements and experience points to level up. While some folks choose running or swimming, I like lifting weights. Unfortunately, the gym I go to has this horrible habit of having two different soundtracks going at once. One of them is a satellite radio channel piped in through the speakers and playing music that, in my opinion, is not conducive to moving lots of weight — a lot of Katy Perry, Taylor Swift, Justin Bieber… you get the idea. The other soundtrack comes from the loud club music pounding from the open doorway on the 2nd floor where the aerobics class is going on. And I guess I should add the third soundtrack which is the grating voice of the instructor cranked up to 11 so she can be heard over the early ’90s techno.

Don’t get me wrong — I love my gym. Lots of machines, lots of free weights, clean, a half mile from my house. But the competing sounds at the gym are one of the reasons that you’ll see 90% of the weight lifters wearing their own headphones and bringing their own tunes. And I’m no different. My choice of gear has always been my iPod and a set of Sony headphones that go in the ear and have a thin plastic adjustable strap that goes over the top of my head. Why? Because my only other experience with headphones at the gym have been the Apple-provided earbuds and they are the most uncomfortable things I’ve ever listened with. Maybe it’s the shape of my inner ear or the size of the earbuds, but they just don’t feel good. And maybe that’s also why I’m not so happy with the sound quality. And they always seem to fall out, either because the cord gets caught on something or my elbow manages to snag them… very frustrating. That’s why I went and hunted down the old pair of Sony headphones and have been fine using them for some time.

Well, the folks at MEElectronics were kind enough to send over a couple of audio accessories for me to test out, and the first one I want to talk about is the simply named CW31 earbuds. They’re housed in wood, and the packaging states that wood … produces a natural acoustic resonance, which is why it is used in the construction of so many musical instruments. [The CW31] resonates naturally with your music, providing a clean and clear sound spectrum with warm, pleasant timbre.

I don’t know… I think I slept through the discussion on wood in my Materials Science engineering class. But you know what? I have to admit… my music does sound better with these earbuds. I tried all kinds of comparisons — listening to the same song with the Apple earbuds, followed by the Sony headphones (an improvement) and then the CW31s. And, yes, the sound quality is that noticeable, especially on those songs with some heavy bass guitar. Even the high notes that hurt my ears with the Apple earbuds seem to sound smoother and less tinny with the CW31s.

But even though I’m loving the improved sound quality with the lightweight CW31s, especially when I’m listening to music, there’s still that issue of whether they’ll stay in my ear. Fortunately, the package comes with a variety of small rubber pads in a number of shapes and sizes. At first I didn’t like the look of the one that had a series of 3 large-to-small ribbed edges that made it look like a hand-drawn Christmas tree, so I tried the simple rounded pads on the ends of the speakers. But I suffered the same issue here — moving my head around or lightly tugging on the cord would inevitably pull them out of my ear. So, I pulled those off, stuck on the Christmas tree rubber pads and shoved them into my ear. And what do you know? They stuck. I had a feeling they would, given the increased surface area and the fact that they look like they’ll give some resistance when pulled on, but I was surprised at how well they fit and that they didn’t feel at all strange (my biggest concern).

So, I swapped out the Sony headphones for the CW31s and headed out to the gym. Now, I tend to run the cable under my shirt, up through my collar and into my ears when I work out or run. These are more than long enough, so much so that I actually had to wrap the cable around the iPad twice because the cable would form a loop coming out of the bottom of my shirt (not tucked in, of course) and got caught once or twice while I was squeezing through the machine area. No big deal, really.

But the sound… wow. Most of the time I actually tune out the music anyway, but even in the noisy gym, I could definitely tell a difference. And given that they’re basically the same price as the Apple earbuds, they’re not going to break the bank should those of you who got a pair with an iPod decide to ditch the white pennies (it feels like I’m trying to keep a penny wedged in my ear) for something else.

All in all… very impressed. I can’t honestly say it’s the wood housing that makes the CW31s sound so good, but I think there may be something to it. These are definitely my new gym earbuds. Now, the other item that MEElectronics sent over was their new Air-Fi AF32s. Maybe it’s because I’ve been using headphones since the first Sony Walkman came out, but honestly the wire on headphones has never really bothered me. But that’s now changing a bit since I’ve had a few weeks to use these wireless headphones (with built-in mic).

The AF32s use Bluetooth to communicate with devices, and I gave them a run with my iPad and my MacBook Air. I used them to listen to music, watch movies, and in a couple of Skype video calls. Here are my thoughts:

1. Not having a wire to deal with takes some getting used to — but that’s a good thing. It really was strange at first to watch a movie on my iPad without having to deal with the wire. A nice problem to have, actually.

2. For the iPad, getting the AF32s to work via Bluetooth was a snap — about 15 seconds total to get them working. For the MacBook Air, however, it took a bit longer because I had to go into the Settings menu and enable the headphones (after they were recognized by the Air) to supply the output. This isn’t the AF32s issue… this is the MacBook Air’s issue as I don’t understand why it can’t automatically switch over to using my headphones when it detects them in the small area supported by the Bluetooth protocol. Maybe it can, but I’m not finding out how to make that happen.

3. They’re not noise reduction headphones. While I tend to prefer headphones that surround the ear, these have a soft padded surface that sits over the ear but does not completely block out other surrounding noises. I didn’t like listening to my music with them for this reason, but I did enjoy using them for video calls; I managed to hear my phone ring in the background and didn’t miss an important call from a friend while using these. I’ve also been enjoying them while playing some games (Team Fortress) — the lack of a wire and the built-in mic are awesome.

4. They are very comfortable. I’ve already mentioned that I’m used to the over-the-head band of my old Sony headphones, and this padded band makes them comfortable to wear along with the soft ear pads. By the way, the ear pads are centered so the headphones can be worn in any manner — there is no left or right side, making the controls mounted on the side of the headphones work for a righty or lefty.

5. They’re awesome looking! I have the version with red ear pads and over-the-head band, and they are very sporty looking. And the adjustable slides above both right and left ear pieces are smooth and solid and don’t feel like they’d break easily. The rest of the shell is a shiny black surface and the controls over the ear piece have an easy-to-feel click to let you know when you’re changing the volume or fast-forwarding to the next song.

6. As for sound — I picked a selection of songs (192Kb/s and 256Kb/s), a key scene from Inception (the attack on the snow fortress), and a one-hour Team Fortress spree to test them out. There wasn’t much of a noticeable difference in sound quality for my song selections but the movie soundtrack was a good choice. The bullets, explosions, and dialogue were crisp and deep sounding, especially once I got the volume dialed in correctly. I was a bit worried that the Bluetooth connection might cause intermittent crackling or minor breaks in the sound continuity, but it never happened. Even when getting about 20 feet from my iPad to grab a drink, the sound quality never changed and there was no noticeable loss of sound.

I really didn’t know what to expect from a set of wireless headphones, so I’m glad to be able to report that they work well, sound great, and work as advertised. They did require a 4 hour initial charge up, but subsequent charges haven’t taken as long (there is an LED that blinks to let you know when the charging is over). I managed to get somewhere between 7 and 8 hours of listening time in before they died on me — fortunately, they also come with a plug-in cable so you can continue to use them even if the battery has died (it disables Bluetooth).

The Air-Fi AF32s now hang beside my gaming PC upstairs… these are the ones I’ll reach for gaming, no doubt (not having an annoying mic hanging in front of my face is great), and given the wire free capabilities, I have a feeling I’ll also be using them with my iPad quite a bit as I do a lot of movie watching on my tablet these days and I prefer not to annoy others with the iPad’s built-in speakers.

The Air-Fi AF32s are a great deal at the sub-$100 price range, especially given that you’re dealing with Bluetooth and not some clunky receiver device. They’re a bit too bulky to wear to the gym, so I’ll stick with the CW31s for that duty. But if you’ve been looking to cut the wire without spending a fortune, these are a nice solution, especially with the built-in mic feature.

I’d like to thank Joe with MEElectronics for giving me the opportunity to test out these two audio accessories. 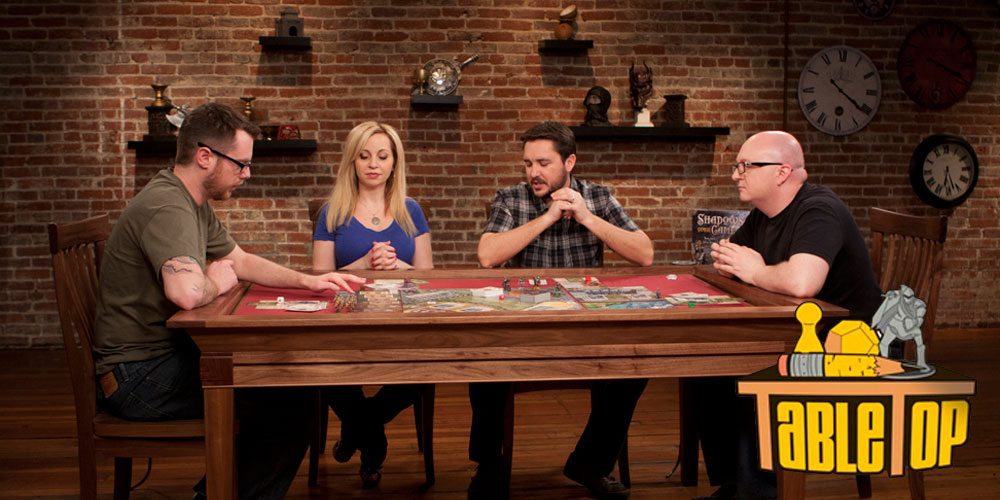 TableTop Returns From Hiatus With Shadows Over Camelot

Watch This: The Empire Strikes Back Uncut