One thing that struck my kids about San Diego Comic-Con was how much the convention spills out into the streets. The crowds engulf the entire Gaslamp District, packing its sidewalks, restaurants, and hotels. When my twelve-year-old, ten-year-old, and I left the convention center to meet GeekMom Kristen and my little goddaughter for lunch, my girls found just as much to gawk at on the streets as they had at SDCC itself. Even the buildings dress up for Comic-Con. My ten-year-old was both grossed out and amused by AMC’s Walking Dead truck, which meandered through the streets all week, displaying an assortment of bloody zombie limbs sticking out from the back. (I’ll save that photo for the bottom of this post under a gore warning.)

I always think it’s even more fun to encounter cosplayers outside, away from the con’s lavishly decorated booths. Shreck-green paint really stands out under the blue San Diego sky. Even barbarians have to stop and take a call sometimes. As you make your way through the crowded streets, you’re as likely to bump into a celebrity as a Stormtrooper. We looked out our van window on the way to the con one morning and spotted actress Claudia Wells, best known for her role as Jennifer in Back to the Future, traveling to the con by pedicab. (In SDCC traffic, that’s faster than a DeLorean.) I have to admit those pedicabs start to look pretty tempting after four full days of hoofing it from one end of the convention center to the other. By the end of the week, my limbs felt fit for the back of that Walking Dead truck. (Here’s that gore warning!) 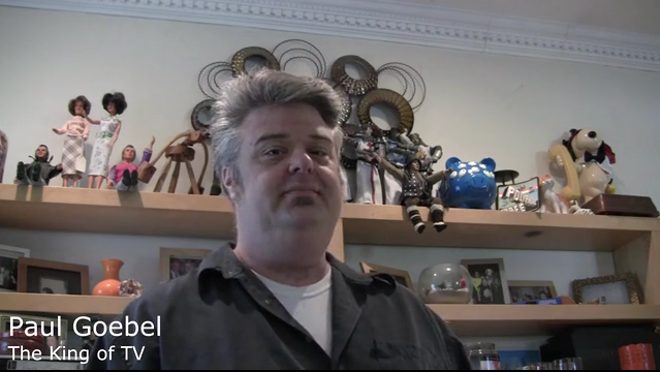 A Google-a-Day Puzzle for Apr. 1

1 thought on “The Streets of San Diego Comic-Con”