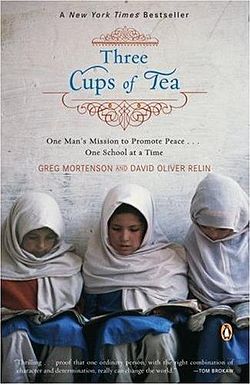 Last Saturday, over a meal of chapati, daal, korma, and basmati rice that we’d come together to prepare, the youth group that I mentor sat down to discuss Greg Mortenson’s “Young Reader’s Edition” of Three Cups of Tea.  The book chronicles the events that ultimately lead Mortenson to create the Central Asia Institute, a 501C3 not-for-profit that raises money through penny drives at schools and churches to build schools  (particularly for girls) throughout Afghanistan and Pakistan. This meal and community-read were the kick-off activities for our group’s second annual “Pennies for Peace” fundraiser.

The story in  Three Cups of Tea (One Man’s Mission to Promote Peace … One School at a Time) that is continued in Stones into Schools (Promoting Peace With Books, Not Bombs, in Afghanistan and Pakistan) is absolutely inspirational: In 1993, after losing his guide during an unsuccessful bid to climb the mountain K2, Mortenson stumbled into the village of Korphe in Afghanistan, weak from exposure. The people of the village gave him food and shelter, and in return, after watching the teacher-less children of the village practice their lessons by scraping at the mud with sticks, he promised to find a way to build Korphe a brick-and-mortar school.

Mortenson returned home to California, sold everything that he had, and lived in his car while working to try and save the $12,000 that he estimated he would need to fulfill his promise. He also sent out hundreds of letters asking for contributions for his project. However, during this time, his most successful fundraiser occurred after students at the elementary school where his mother was principal organized a penny drive and raised $623.  Ultimately, this event became an important platform in his work: school children had the power to raise money and change lives in Afghanistan and Pakistan simply by collecting pennies.

In December of 1996 an angel donor appeared and the Korphe School was completed. In the wake of this first success, the angel donor told Mortenson that he seemed to be good at building schools and gave him seed money to continue building them throughout Afghanistan and Pakistan. As of 2011, according to the CAI’s impact statement on Guidestar (a not-for-profit agency that promotes philanthropy by encouraging nonprofit financial transparency):

The CAI has established 178 schools, and also runs an additional two dozen more temporary schools in refugee camps, areas of conflict, war, natural disasters, or where extremists have not allowed girls to attend schools. Approximately 68,000 students, including 54,000 females attend CAI schools, which are taught by a total of about 1,240 teachers.

For a hippie-ish geek like myself, Mortenson’s messages for a post-9/11 world–“books not bombs,” “war and violence are not the answer,” “one person’s ideas and hard work can make a difference”–synced with my own most deeply-held beliefs and hopes. After reading an Op-Ed piece by New York Times columnist Nicholas Kristof in 2008 stating that the $500,000 price tag of one Tomahawk missile could fund 20 schools in Afghanistan or Pakistan, I began to ask myself, “Is a military presence in this region really the most effective, most humane way to make sure that a tragedy like 9/11 does not occur again? Could this Mortenson guy be onto a better strategy?”

I’m not the only GeekMom to admire Mortenson’s work, either. GeekMom and Air Force reservist Patricia Vollmer had this to say:

Not only have I read both of [Mortenson’s] books with enthusiasm, but I have sent school supplies to my USAF colleagues in Bagram who have distributed the supplies to schools that were funded by the Central Asia Institute.  The Department of Defense even has supported “getting through” to the Afghan people by laying a foundation in education for children, a foundation laid in part by their relationship with the CAI.  Three Cups of Tea is on the Joint Forces Staff College’s professional reading list (as well as other military professional reading lists).

Many world leaders have also supported Mortenson’s work:  President Obama donated $100,000 of his Nobel Peace Prize award to the Central Asia Institute and in 2009 the country of Pakistan presented Mortenson with one of its highest civil awards, the “Sitara-e-Pakistan” or Star of Pakistan.

Unfortunately, a day after the dishes from my youth group’s meal were cleaned and put away,  Mortenson’s work came under intense scrutiny after CBS’s 60 Minutes aired a highly-critical segment largely influenced by the research of an early CAI supporter–author and fellow-mountaineer Jon Krakauer. Coincidentally, Krakauer has also just this week released a 90-page “long-form journalism” piece called Three Cups of Deceit on the brand-new online-publishing site Byliner.com.

When I first began reading about this story in the media, the main focus as presented in the New York Times and elsewhere was that this was a publishing-ethics issue. Mortenson’s books profess to be biographical. If real-life events transpired differently from his books, how much discrepancy was acceptable?

Early response to the 60 Minutes story, then, focused on two questions:

In response, Mortenson now says that in order to create a more “readable” story, he and his co-author compressed the time line surrounding his first visits to Korphe. Additionally, to this day, he does not know whether the people who detained him in Pakistan’s Waziristan region were Taliban or not, all he can say for sure is that his personal possessions and passport were taken and he was detained against his will for eight days in a small room.

These questions alone would not dissuade me from the legitimacy of using Mortenson’s books as teaching tools for children–they seemed forgivable “white lies.” 60 Minutes did make additional criticisms of Mortenson, however:

These questions give me pause–particularly when I hear that Mortenson gave more than 150 talks last year and can receive as much as $30,000 per speaking engagement.

In my own church, the decision was made to immediately pull the plug on our “Pennies for Peace” program.  Essentially, the thought was: there are many programs in existence that accomplish important work, why should we affiliate ourselves with someone who seems financially suspect? I cannot help but feel disappointed by this, however. This was a program that I really believed in and for which I still hold out hope. I also wonder: our little youth group’s donation was not going to be earth-shattering either way but how many other groups will make the same decision we have?

I’m shaken up about how this report–and the subsequent media attention–might ultimately impact the end product: less support = less funding = slowing down of the building of the schools = slowing the education of those kids.

Clearly, the CAI needs to strive for greater financial transparency as well as significant  separation between “Greg Mortenson, author” and “Central Asia Institute, not-for-profit” in the near future. Mortenson is due shortly to under-go heart surgery–this might be an opportune time to bring on additional leadership. However, if this news story destroys the Central Asia Institute, will this exercise have been worthwhile?

The Times reporter Nicholas Kristof, for one, does not think so, and finds this story “heartbreaking.” On CNN, Kristof recently said that he’s visited some of the “truly impressive” schools in Afghanistan, himself, and that the public “should reserve judgment to some degree.”

Personally, I’m left thinking: was this simply the best business and book launch at the expense of a world-changing cause, ever? Is there a Webby category for that?

‘Dumb Ways to Die’: Smart Ways to PSA (Plus Giveaway) 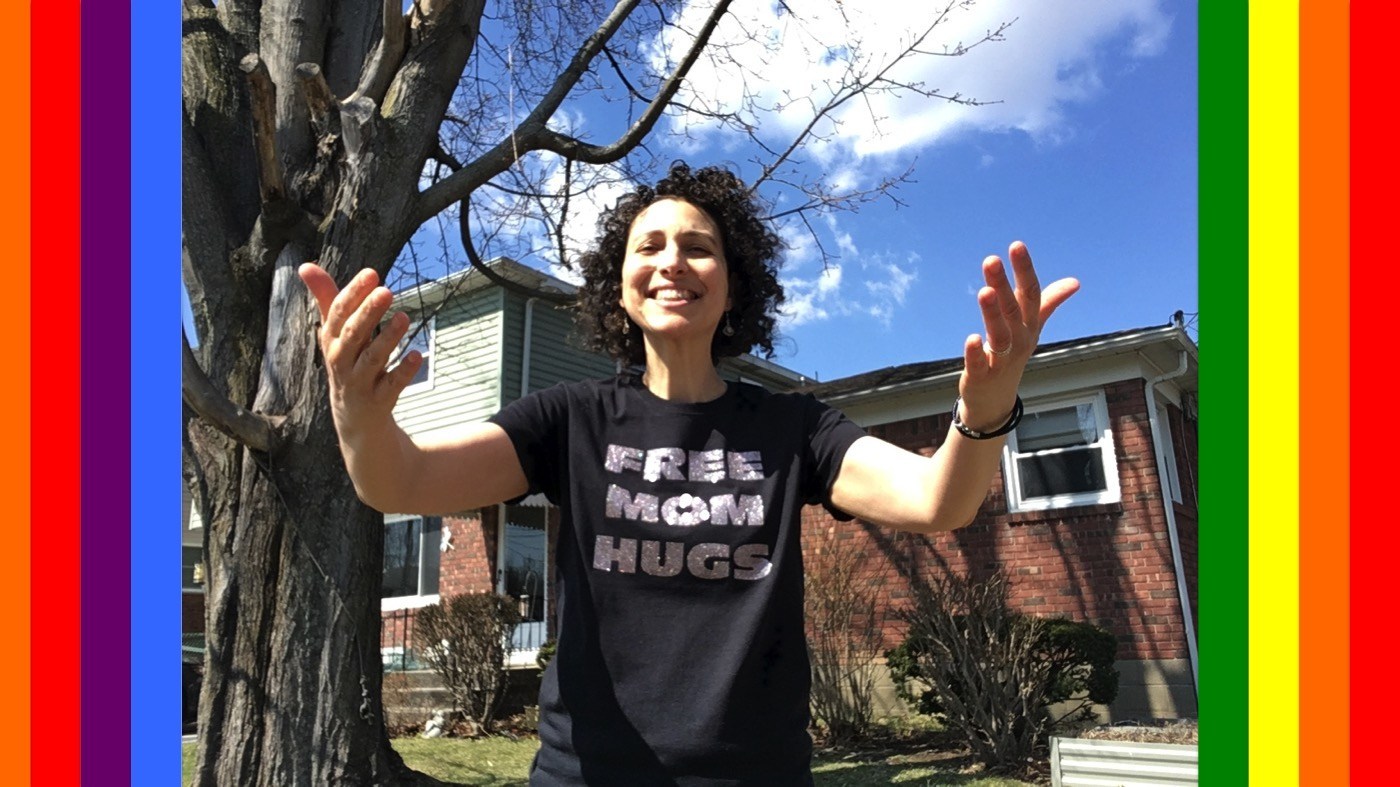 “Free Mom Hugs” at a Pride Festival Near You!

GeekMom: ‘Violet Veil’ Middle-Grade Series Kicks Off with ‘A Case of Grave Danger’

7 thoughts on “Geek Ethics: Is it Important That Greg Mortenson Lied?”