Space Shuttle Discovery will make its 39th and final launch. The 11 day mission to the International Space Station is scheduled to begin November 1, weather permitting. First flown in 1984, Discovery is the oldest orbiter in service. After retirement, NASA has offered it for display at the National Air and Space Museum.

Our intrepid Discovery deserves a space-inspired soundtrack for her final mission. Here are a few suggestions, mostly old and older, since there aren’t a lot of new space tunes. What music might you blast in honor of Discovery?

Pray that there’s intelligent life somewhere up in space
‘Cause I’m afraid we’ve been cheated here on Earth.

“Is There Love In Space” by Joe Satriani (instrumental)

Here am I floating round my tin can
Far above the Moon.
Planet Earth is blue
And there’s nothing I can do.

Well I saw the thing comin’ out of the sky
It had one long horn and one big eye
I commenced to shakin’ and I said, hoo-eee
It looks like a purple people eater to me.

And all this science I don’t understand
It’s just my job, five days a week
I’m a rocket man.

“It Came Out Of The Sky” by Creedence Clearwater Revival

Oh, it came out of the sky
Landed just a little south of Moline
Jody fell out of his tractor
Couldn’t believe what he seen ..

“Standing On The Moon” by Grateful Dead

There’s a metal flag beside me
Someone planted long ago
Old Glory standing stiffly
Crimson, white and indigo – indigo.

With your mind you have ability to form
And transmit thought energy far beyond the norm
You close your eyes
You concentrate
Together that’s the way
To send the message
We declare World Contact Day.

“Walking On The Moon” by The Police

Well the little green men, they were real hep-cats
Rockin’ and rollin’ doin’ their crazy flats.

The fireball we rode was movin’
But now we’ve got a new machine
‘Yeah yeah yeah yeah’ the freaks said.

“Higher And Higher” by Moody Blues

Blasting, billowing, bursting forth
With the power of ten billion butterfly sneezes
Man with his flaming pyre
Has conquered the wayward breezes. 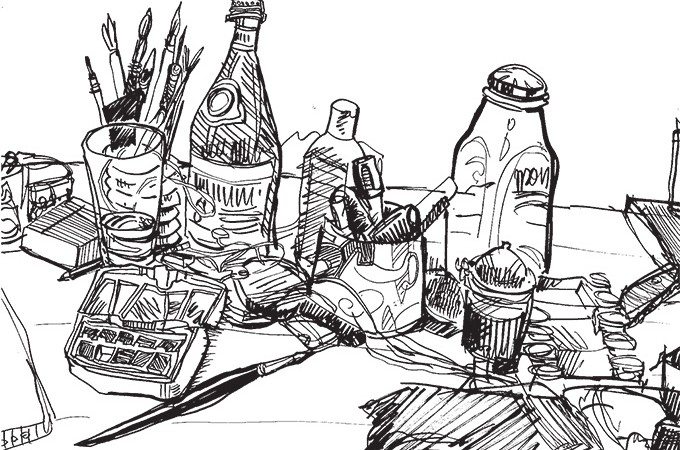 Find Time for Creativity With Art Before Breakfast and Other Books