We can hardly remember what it was like an entire month ago when it wasn’t 105 degrees out and we didn’t have to wear stillsuits just to get across the parking lot.

But we were reminded of those sweeter, gentler days when we got an email from Tim, our Ultimate GeekDad Giveaway winner who seems to have recovered from the shock of being randomly drawn to win a whole pile of awesome for Father’s Day. We were happy to hear that not only was our contest winner a father of two, but also a network systems manager.

It couldn’t have worked out better–except for creating iPad envy at his office:

The only negative part of this whole thing is that I had to tell the Network Tech that works for me that I won. He had entered the contest several times to win the iPad for his wife. She was wanting a laptop badly. It was sort of sad, afterall, he told me about the contest last Wednesday. At the last minute, I entered the contest and won! He took it fairly well, he’s a very good sport. I’m going to dig up one of our old laptops for him to appropriate for his wife’s use. Hehehe…my wife wants the iPad too…and of course the wife always wins out!

And not only do his sons share the brand-new Xbox 360 (how nice of them!) but they’re putting the tech to work:

The boys and I will use the 8gb video watch for martial arts. They just promoted to 1st Dan in Hapkido and I have made them several training videos that will be ultra handy on the video watch.

That’s right: Tim and his boys are into Tactical Hapkido. Luckily they haven’t had to use their mad skillz to defend their loot, but it’s good to know this geek family is prepared–’cause that’s a lot of stuff.

Thanks for the update from the field, Tim!

Hacking the Holidays: The Tree at 30 Rock is Going All LED 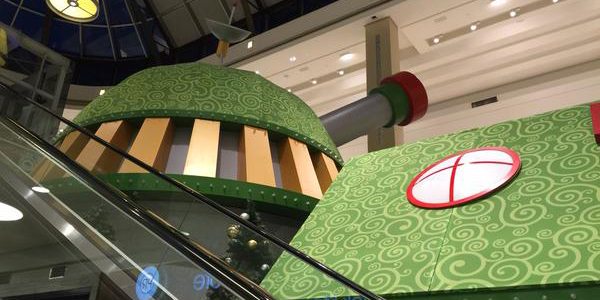