With this gift guide, we conclude our gift suggestions for the year. I hope you enjoyed our guides and were inspired by them. I personally would like to thank the other GeekDad contributors who wrote up their favorite present ideas for the guides — they deserve much of the credit/blame! And if you don’t see what you like here, click on the graphic above to peruse our previous gift guides. Just because you can’t have a pony doesn’t mean you can’t have a pet! These tiny jars hold miniature cacti, submerged in blue or pink goo that has all the nutrients the cacti needs to grow. Buy it on ThinkGeek.com. Robert Crease’s fascinating book explores the ten mort important equations, including the Pythagorean Theorem, Newton’s second law of motion, the second law of thermodynamics and Heisenberg’s uncertainty principle, describing the importance of these equations to science and the world at large. Buy it on Amazon.

Coughlan’s Magnesium Fire Starter*
Ah, the ultimate kindling, pure magnesium! Great for camping, or simply if you’re utterly paranoid about the fall of civilization and want to stock up on survival gear. Scrape off some shavings with a pocket knife, then light with the attached starter bar using the back of your knife. Woosh! Buy it on Amazon. Imagine a little mesh bag with 15 quality mini toys, all different. With them, you can play ten different games with the included directions, or make up games of your own. Play memory games, tell stories about the pieces or guess what each piece is with your eyes closed. Think-Ets are portable, open-ended fun. You can also get a few sets and collect the pieces. Buy them at Amazon.

WikkiStix
These colorful waxed lengths of yarn allow you to make art, learn things and keep kids entertained. They’re completely reusable and stimulate the imagination of kids 3 and up and grown-ups everywhere. There is no right or wrong way to play. Visit the Wikki Stix site for many ideas! Buy them at Amazon. Inexpensive Leatherman tool that fits on your keychain. I use mine nearly every day, mainly for cutting jobs (with the scissors). When I traveled by plane recently, I took the Micra off my keychain to save the TSA some stress — though predictably, I found myself needing it on the trip. Absolutely essential for those on the go. Buy it on Amazon.

BookGem
It’s a very compact device that flips open to hold your book for you, leaving your hands free. It can stand the book up, or you can attach it so the book is lying flat on a table. What’s especially great is that the BookGem has these hard-to-describe notches so that you can turn pages without having to mess with the spring-loaded clips. I love it because I can read while doing other things like eating, working on laundry, or other things that require hands but not necessarily my eyes and brain. Buy it at BookGem.com.

With a recently re-engineered formula, Space Food Sticks are back! They are chewy energy sticks in delicious peanut butter and chocolate flavors. While not a meal replacement, they do contain protein and are much better for you than a candy bar. Buy them at Amazon.

Buckyballs
Whether you like to fidget with something in your hands or you just like playing with geeky toys, Buckyballs are a bunch of little magnetic balls that can be arranged in an unlimited number of shapes and patterns and even come with their own carrying case. Buy them at Amazon. The crazy geniuses at Q Workshop create all sorts of ornate, beautiful gaming dice — Earthdawn, Cthulhu, Deadlands, Steampunk, Arkham Horror, and so on. Just the thing for the gamer in your family! Buy them on Amazon

BunkBots*
Sick of the usual plush? Want to add some geek to your child’s snuggle time? Pick up a BunkBot or two. You can choose from several different personalities, half of which are evil… I mean, have night vision. They’re soft, they’re squishy, they’ll join you in your robot revolution. Plus 1% of profits are donated to the Oregon Museum of Science and Industry. Buy them at Amazon. Tiny dolls of ninjas, aliens, robots and so on, safely embedded in eggs of water-soluable stuff. Drop the egg into a bowl of water too see what figure you got! Great fun for kids, plus they get to play with the toy afterwards. Buy them on Amazon.

TecTouch Gloves*
The problem with all these neato touch screen devices out there is, how to navigate when you’re wearing mittens and gloves? The solution, TecTouch Gloves, which are as cozy as you need for most daily uses but pack tiny disks of conductive fabric on the index finger and thumb, allowing you to interact with those touch-sensitive surfaces. Buy them on Amazon. For people unnerved by the new iPod Shuffle’s buttonless surface, this case covers the iPod, protects it, and adds buttons as well as the capability to use non-Apple headphones. Buy it on Amazon.

Confessions of a Public Speaker*
Author Scott Berkun gives the 411 on the techniques of great presenters. With tips on how to combat pre-speech butterflies, battling the “tough room” and how not to bore people silly, this book will ensure your next Powerpoint will be a success. Buy it on Amazon For those interested in getting into Magic: The Gathering but don’t know where to start, this set rocks. Not only do you get the game rules and an icosahedral life counter, but you snag a whole passel of magic cards, including massive quantities of “foils” — premium, ultrapowerful Magic cards. You will find foils in regular packs of Magic cards but not in this concentration. Buy it on Amazon

Titanium Spork
I bet Aunt Beru has a bunch of these bad boys to go with her blue milk. It’s a spork. It’s made of titanium. Keep it in your desk drawer at work or pack in in your lunch box. Buy it on ThinkGeek.com. Dad’s bat belt feeling a little light? This handy little number is perfect for squirrel watching, spotting ninjas, oh… important stuff like that. Great for a quick glimpse during sporting events and robot battles. Buy it on Amazon.

LifeGear 200-Hour Glow Stick*
Inexpensive LED light works both as a flashlight and a glow stick. The AG-13 button cells keep it running for up to 200 hours. In emergencies, you can set the glowstick to flash and you can pull off the end to use it as a whistle. Buy them on LifeGearCompany.com. When nothing matters, nothing is important, pop a mint that tastes like nothing. I’d rap more about these mints but somehow I can’t bring myself to care. Buy them on ThinkGeek.com.

Console Point Cards
Nothing says “Throw this money away on DLC with my blessing” quite like slipping someone a console point card. Sure, we all know that you can use a credit card to add points to your PlayStation Network, Xbox Live or Nintendo account, but you know where that dough is coming from. Point cards are like free money. Fun money. They are the pre-paid cellular of the gaming world, and they easily meet all your console/handheld gaming needs. Does your husband’s Xbox Live Avatar need a new sweater? Girlfriend desperate to pick up some Sega Genesis titles from the Wii Shop Channel? Little Jonny jonesing for some PSP minis? There’s a point card for that! Buy a Nintendo 2000 Points Card (DSi or Wii), PLAYSTATION Network Card or Xbox 360 Live 1600 Points on Amazon.

*Indicates the reviewer who wrote that gift suggestion has received a free sample of the item described. 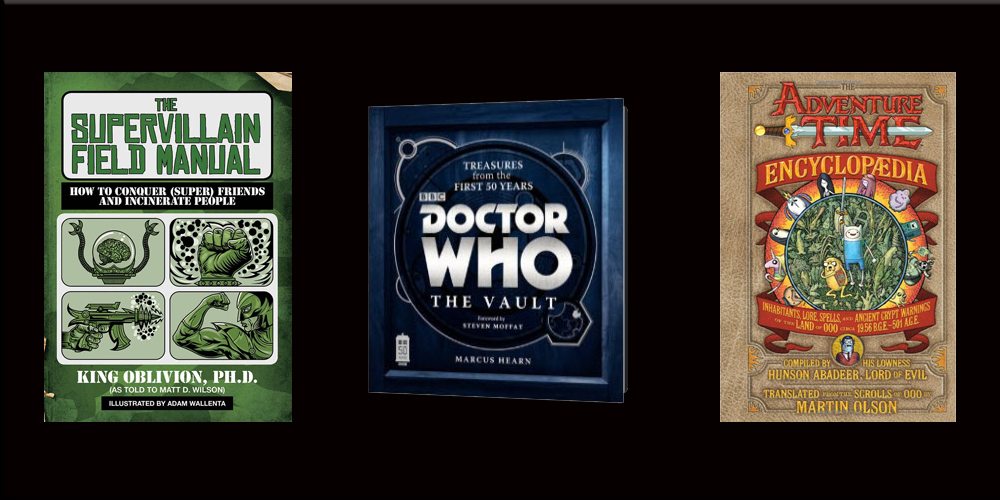 3 Books for a Better, Badder You