Why is it that more than thirty years after the first movie hit theaters, Star Wars continues to spark debate over its appeal to children, whether it is appropriate material and whether George Lucas’ empire exerts too much influence? 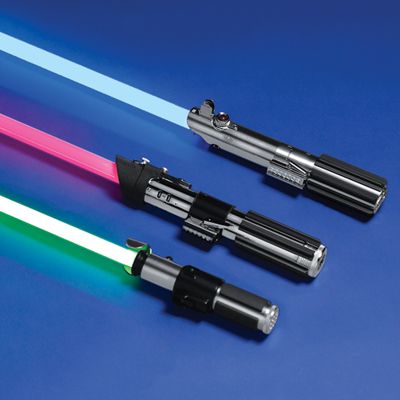 You may have caught an article by Emily Bazelon in Slate over the weekend, titled "May The Force Be With Them: Why does Star Wars still take over the minds of small boys?"  The subject is one of constant debate; as a matter of fact, GeekDad’s Daniel Donahoo wrote about it in January.

In the Slate article, the author was interviewing a child psychologist and ended up discussing the fact that her 5 (almost 6) and 3 year-old boys had been allowed to watch Star Wars with their parents.  She was admonished by the psychologist for having done so.  From there, the piece goes on to examine the pervasiveness of Lucas’ creation, especially the mindshare it commands among children (boys in particular), whether they have seen the movies or not.

I had another reminder of how firmly entrenched Star Wars has become outside of geek culture when I leafed through the latest Hammacher Schlemmer catalog and found (on page 35, if you’re interested, next to the "Keep Your Distance" Bug Vacuum, which itself looks something like a lightsaber as interpreted by Sunbeam), a series of replica Star Wars lightsabers.  What I found particularly interesting was the detail the catalog went into to ensure that potential buyers understand there are four different model lightsabers being offered, and that each is authentically modeled after the weapon used by a specific character in a specific movie.  This is a level of detail I would not have expected here; when they’re offered for sale at ThinkGeek, sure, but not in a mass market mail order catalog.

Star Wars as a marketing machine, after the jump.

For the record, we have watched all of the Star Wars movies with our kids, although Revenge of the Sith was off limits until the twins were five, and even then we fast forwarded through the scenes where Anakin was sliced, diced and burned.  All of the Star Wars movies have been on heavy rotation on the AppleTV, with the exception of Episode III, which remains tucked away on the shelf- I don’t have an issue with the kids seeing the majority of Lucas’ films on their own now, but that final installment is still a little dark for unsupervised viewing.

There’s no doubt in my mind that Star Wars is a marketing juggernaut.  In my own experience, it’s captured much of the market for young boys; girls to a certain extent, but I don’t believe anywhere near so thoroughly.  My boys are six now and although they enjoy Spiderman and The Hulk and other comic book creations, everything always comes back to Star Wars.  Dr. Seuss and Disney?  They seem to serve to cleanse the palate.  Ben 10, Transformers, Pokemon and other cartoons play a definite back-up role to the Clone Wars series.  When it comes to books they want to read, Star Wars titles top the list.  They have lightsabers (not the ultimate Hammacher Schlemmer versions, mind you), collect Star Wars miniatures of various scales, play with Star Wars LEGO sets and have the LEGO Star Wars video games on three different platforms.  Even their Electronic Battleship game is of the Star Wars variety.  I was shopping for new bikes for them a few days ago and was a little turned off to discover Star Wars themed bicycles prominently displayed in the store- maybe a line has finally been crossed?  They won’t be getting those; they can slap their own Tie Fighter stickers on a regular bike if they must.

My daughter watches now and then, but even the rather shallow attempt by Lucas to capture the attention of more girls through the introduction of the sassy Ahsoka Tano character in the Clone Wars, hasn’t really had much of an impact.  Her friends seem to share this disinterest, so I’d suggest that Lucas still hasn’t found that magic formula although I have no doubt he’ll keep trying.

The boys are off to another birthday party and when trying to tease out potential gift suggestions for the birthday boy, who is turning seven, the inevitable answer came back: He loves anything to do with Star Wars.