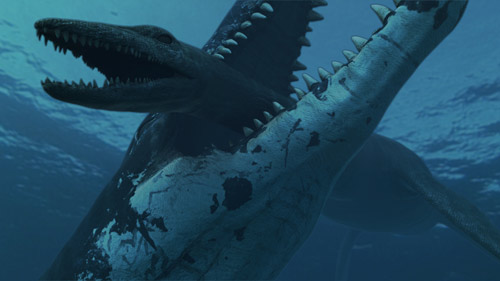 Discovery of a new dinosaur is always an exciting event. So last week was packed full of double-excitement as paleontologists on two separate digs announced what could very well be the largest — and smallest — known predators found to date.

This marine reptile was huge, with a skull more than 10 feet long and an overall length exceeding 50 feet and weighing nearly 50 tons. Its huge jaws, with foot-long teeth would have been capable of exerting 33,000 lbs of pressure per square inch and was capable of swallowing a great white shark whole — far more powerful than a Tyrannosaurus Rex. Scientists believe the new discovery to be a new species of pliosaurus and have taken to calling it "Predator X". Predator X would have ruled the seas during the Jurassic period, 147 million years ago.

The skull of Predator X was discovered last summer but not revealed until earlier this week. The History Channel will be airing a documentary about Predator X on March 29.

At the other end of the spectrum, paleontologists from the University of Calgary have discovered Hesperonychus elizabethae, a miniature dinosaur, similar to a velociraptor – complete with razor sharp claws, teeth and a similar body structure to its larger film-famous brethren. Standing just 19 inches tall and weighing little more than four pounds, Hesperonychus would have been similar in size to a chicken, but far more dangerous. This mini-raptor would have preyed on birds, small mammals and baby dinosaurs.

Small carnivores were thought to exist but scientists have had difficulty finding and identifying many of them. Their small size meant few fossils are left behind, most are destroyed by nature and time. Hesperonychus was discovered by the same team that found Albertonykus last year, another very small dinosaur.

via The Daily Telegraph

(Image courtesy of Natural History Museum at the University of Oslo)

Turn Your Board Game Dreams Into Reality With the Game Crafter