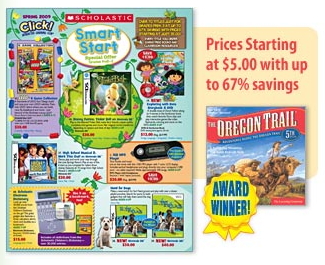 Has Scholastic, the direct-to-classroom publisher and bookseller, lost its way, pushing cheap toys and video games straight into your kids’ backpacks, all in the name of promoting reading and kicking a few bucks back to our ailing schools?

Judging by the number of articles and posts I’ve run across lately, I don’t think I’m alone in having serious doubts about what role — if any — Scholastic should be allowed to have in schools.

I understand that the schools receive books and teaching material from Scholastic based on sales through students, and I don’t have a particular issue with that. Other than the fact that it’s a little sad when school budgets are apparently low enough that supplemental fund raising is needed to help equip the classroom, but that’s another story. Obviously, I wholeheartedly support the idea of promoting reading to children. Selling books to kids at decent prices, which in turn helps to support the school seems to be a reasonable balance then.

One of the key factors to me is that most books aren’t really considered status symbols by children and the school library is always there for borrowing reading material. So if a few kids in the class buy books from Scholastic and receive their purchases in the classroom, kids whose parents chose not to support the program, or simply couldn’t afford it aren’t likely to suffer hurt feelings. But as soon as you cross the line into tie-in books (like Pokemon, for example); or even worse, into toys, things get much more complicated. More expensive products truly separate the "haves" from the "have nots," potentially add a significant degree of peer pressure and make it really difficult to justify this as a reading-promotion program. Most kids aren’t going to ask their parents for a book; they’re going to go straight to the toy.

I suspect there would be an outcry if Toys ‘R’ Us, for example, was allowed to direct-market videogames to students through their school, but Scholastic has snuck this in under the guise of selling books. They have defended the practice by suggesting that "some kids learn through video games," as reported in the Chicago Sun-Times. That’s lame…

Looking through this month’s offering, which all three of my children bought home from school (complete with reminders on their calendar of when monthly Scholastic book orders are due), I found a selection of books, but also the following products:

Out of 79 items offered for sale on this flyer, I counted 16 that were direct TV show or movie tie-ins. Mind you, we don’t get cable, so I probably missed some.  And, out of the 79 items, 20 are pushing the definition of "book" to various degrees. The current flyer doesn’t contain video games, but you don’t have to look very hard to find Scholastic school catalogs flogging everything from Lego to Nintendo DS games.  Some of the items are indeed educational, like the telescope for example, but that isn’t the point.

Scholastic is a large company with 6,500 employees and 2008 revenues of $2.2 billion.  This is obviously big business and adding $30 videogames to the mix would certainly increase revenue compared to a $2.99 chapter book, so I can understand why they think this is a good idea. But, should they be allowed to?

I don’t know about you, but when I buy a toy or a videogame, I’m going to go to a store (brick and mortar or online) where there is selection, I don’t feel like I’m  being guilted into making the purchase and no other kid is going to feel bad because I walk into the school and hand the toy to my kids in front of their classmates.

New DKFindOut.com Is a STEM-tastic Resource for Animals, Planets and More

Unlock the Wonders of the Cosmos With Brilliant’s Astronomy