My wife was out of town most of last week, leaving me with one of my most cherished opportunities – solo downtime with the kids. I really enjoy being the only parent (for a little while) and taking part in one of our favorite traditions: when it’s just me & the kids, each night a different child gets to choose where we go out to eat dinner and which game we play afterward. However, this time, I figured it was time to try out some new games. So I took advantage of a credit balance at Amazon and ordered a few that I had read good things about. Here are the games and what we thought of them: 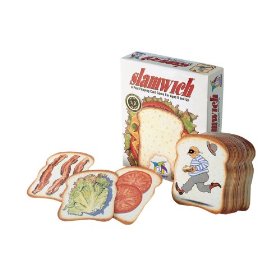 Gameplay: In this fast paced card game, players take turns flipping their bread-shaped cards onto a pile. All food cards show some type of sandwich ingredient. When certain situations occur (cards in a repeating (A – A) or bookended (A – B – A) food sequence), the first to slap the pile wins all the cards beneath. There are some wild cards, as well. Turning over a thief requires shouting the phrase "stop thief!" before slapping; a muncher gets the pile unless another player can stop him by producing a food sequence or another wild card. Once you lose all your cards, you’re out. Play continues until one player has all the cards.

Review: We had a lot of fun with this one, especially groaning at the food combinations. (Peanut butter played on top of mushrooms? Disgusting!) Plus, any game involving card flipping and slapping is a big hit with my kids. The muncher cards seem a little dubious in their value, but it does add a little variety. This is a game – even when I was trying – that I often ended up losing, much to the delight of the rugrats. Slamwich has won an Oppenheimer Toy Gold Award and a Parent’s Choice Approval Seal. 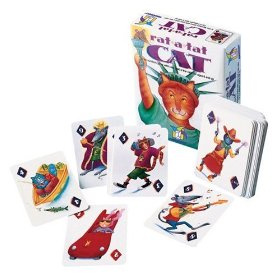 Gameplay: This game tests equal parts of your memory and strategy. Each player is dealt four cards face down in a row. Players look at their outside cards and memorize the number of each card. The object of the game is to total the value of the cards in your hand for the lowest hand among all players. As play begins, each player has the option of taking the top card showing face-up from the discard pile or the face-down card from the draw pile. The player can then swap with one of her existing cards or discard (if the drawn card is a high number). There are a number of power cards that give the player the ability to swap a card with another player, peek at any card in her hand or get multiple cards in a single turn. Play continues to a certain number of rounds, time or a set number of points.

Review: Two of my kids loved this game, the other didn’t. This is another game where age isn’t a real advantage, so my kids loved that they beat me in this game (notice a trend?). When rounds ended, it provided us with an opportunity to practice our math when adding the cards up. Days later, one of my children still wants to play this game every night and since addition is involved, that makes this game homework … doesn’t it? Rat-A-Tat Cat has won numerous awards, including an Oppenheimer
Toy Platinum Award, Mensa Select Honor, Games Magazine Top 100 game and
Dr. Toy’s Best Classic Toy. 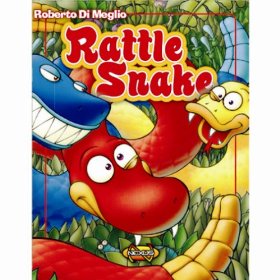 Gameplay: Setup is simple: open the game board, decorated with about
20 different colored cartoon rattlesnakes and evenly divide the 12 rattlesnake "eggs". The eggs are actually strong magnets and your goal is to place your eggs on the board without causing them to clash with the other eggs that have already been placed. A six-sided die with a different color snake on each face decides where you place your egg on the board. If you place yours too close to another egg and cause them to clash (magnets to smash into each other), you have to pick up the paired magnets and your turn is over. The first to place all their eggs win.

Review: Gameplay is very fast and fun and Rattlesnake has ended up being a repeat performer with games played nearly every day — thanks to its easy setup and quick play. Although the game is recommended for ages older than 8, my kids (6, about to turn 7) had no problems whatsoever.
I think kids as young as 6 could enjoy this game. However, patience helps avoid eggs clashing and a little dexterity is necessary, especially as the board fills. We really enjoyed Rattlesnakes, plus, it’s the first board game I think I’ve ever played that warns its players to keep pacemakers, defibrillators and electronic items away from game pieces! 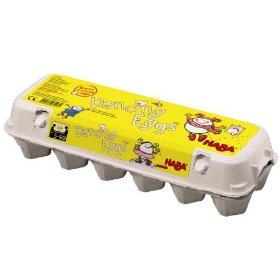 Gameplay: More eggs! Packed in a real egg carton, Dancing Eggs consists of nine rubber eggs, one wooden egg and two oversized, six-sided dice. Players take seats around a table and play begins by rolling the red "action" die. This die prompts the player (or players, depending on the roll) into action – either taking an egg from the box, madly grabbing at the die, running around the table, bouncing a rubber egg or shouting (or not shouting) out chicken calls. The player who wins the challenge is awarded an egg and the white die is rolled to illustrate where the egg must be placed:
between the knees, under the neck, inside the elbow, etc. Play continues until all the eggs are gone or one player drops one of his eggs. The winner is determined by the number of eggs he holds, the wooden egg is worth two points.

Review: This game was fantastic – it was responsible for more giggles, laughs and smiles than all the other games put together. The highlight was when I attempted to run around the table with an egg between my knees, under my chin, inside my elbow and between my ear and shoulder – one of my kids never made it around the table, she was laughing too hard. All of these games were great, but Dancing Eggs was our hands-down favorite.

GeekDad Puzzle Of The Week: My Amazing Comic Collection Solution