February and March are shaping up to be a couple of excellent months for makers in Minneapolis and St. Paul: 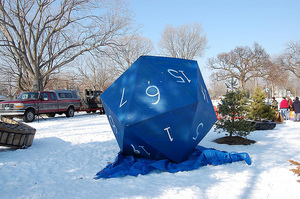 Make: Day celebrates the ingenuity and inventiveness in our community. Building off the success of Maker Faires and the American Maker events, Make: Day will give local engineers, artists, tinkerers and inventors the opportunity to showcase their DIY creations to Science Museum visitors.

Festivities will take place on Saturday, March 14th, from 10 am to 3 pm throughout the Science Museum’s exhibit galleries. The event is included in the regular admission price and free to all members of the museum.

If you’re at all interested in seeing a Maker Faire in the Twin Cities, swarm this baby so the chief geeks deem us a worthy candidate for a Faire! And it’s on Pi Day even…

Make: is the DIY series for a new generation! It celebrates "Makers" – the inventors, artists, geeks and just plain everyday folks who mix new and old technology to create new-fangled marvels. The series encourages everyone to invent, revent, recycle, upcycle, and act up. Based on the popular Make magazine, each half-hour episode inspires millions to think, create, and, well, make.

Make: TV Premiere Party
As Dan mentioned, he and I attended the premier party at Twin Cities Public Televison, got to visit the set, and checked out a lot of gadgets and gizmos the show’s makers demonstrate. My favorite parts were meeting John Park and Dale Dougherty of Make… they had a lot of interesting stuff to talk about. In particular, I was excited to learn that John actually has awesome hacker cred — he’s not just a presenter (as one might speculate given the state of TV these days) he gets this stuff.

I also enjoyed (re)meeting a lot of interesting local folks associates with the show: the aforementioned Ted Goessling, Nick of TPT (one of the organizers of Make: Day) and Steve Jevning of Leonardo’s Basement. I particularly loved playing with the laser graffiti system they had and grooving on the circuit bent music of Tim Kaiser. 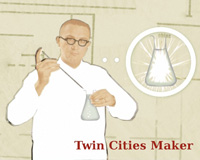 Twin Cities Maker
This nascent maker collective started with a bang and seems to be going strong with a core group of hackers who meet once a week. Check out the TCMaker blog, forum and wiki for more information. By the way, any #tcmaker cats wanna follow me on Twitter, I’d love to stay in the loop on local tinkerings.

Second Annual Rube Goldberg Building Event at Leonardo’s Basement
Put a bunch of grown ups together in a room with a mountain of junk and oh… a few glasses of wine. The result, a hundred-foot Rube Goldberg machine and a whole lot of fun. Check out our post on last year’s machine to see a great video of the result. This year’s event is scheduled for March 6th.

William Gurstelle’s Fire Piston
Bill Gurstelle — author of the immortal Whoosh Boom Splat, contributing editor to MAKE Magazine and producer for MAKE Television — is kind of an elder statesman of Twin Cities hardware hackers. Inspired by a tennis ball mortar he saw in college, Bill began building flinging things and writing books about them. He shot the following quick video on how to make a fire piston, an ancient way to start fires by rapidly compressing air.