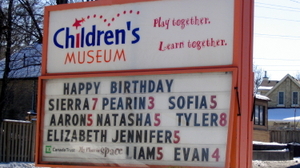 My daughter is coming up on her ninth birthday this weekend.  We’ve had some pretty cool parties for her in the past- ones held at our local children’s museum and at the aquatic center were two in particular that were pretty fun, and last year was outdoors at a ranch.

This year, Natasha decided that she’d like to have a bunch of her friends stay for a sleepover.

Wisely, Jon and Aidan asked if they could stay at their Aunt’s house that night.  I think six-year old twin boys are in mortal danger if a pack of eight, nine and ten year old girls decide to give someone a makeover.  I asked if I could stay over at their Aunt’s house as well, but my request was firmly declined.  So, while my wife will be running the show, I’ll be manning the barbeque and the carpet shampooer, while trying to keep the dogs, the puppy and my TV out of harm’s way.  But frankly, I’m a little terrified.  Originally, there was some talk of a costume-themed sleepover, which had potential, but it’s now morphed into a Hannah Montana (HM) fest…  I want to be involved, but Hannah Montana?  I know nothing about this.  I’m going to steal Matt’s idea for the rainbow cake (actually, I used it last week for cupcakes and they were a big hit); it’s not specifically HM themed, but who doesn’t love a brilliant, multi-colored cake?  Other than that, I’ve got nothing.

It’s pretty bleak outside; snowy and cold, but occasionally reaching temperatures just warm enough to make a sloppy mess of everything.  So wearing the herd of kids out outdoors really isn’t much of an option.  I suggested a Super Smash Bros. Brawl tournament on the Wii, but that didn’t go over so well.  I plan on hiding my Rockband gear (even though I could use an excuse to replace the RB1 drum set with a RB2 version) because there are just so many ways that could get wrecked.  The only activity suggestion I could come up with was looking for a microphone to hook up to Tasha’s HM-themed iPod boombox so the girls can sing along with Miley…

I think I’m in over my head on this one.  Anyone have any advice?  Any parents of girls in that ten year-ish age bracket who have party activity suggestions that might make it look as though I have a clue?  Or should I stick to prepping the food, hide upstairs with the animals and furtively try to watch Battlestar Galactica over the din of "Best of Both Worlds"?

The Top 5 Reasons Marriage Equality Is a Win for Everyone