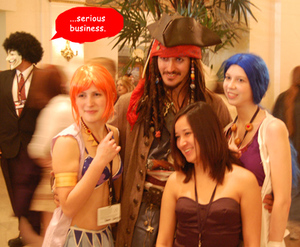 Valentine’s Day weekend had the Mrs. and I making our annual trip to our favorite East Coast anime convention, Katsucon.
The anime was good and the cosplayers where out in full force. Yet something was different this time around.
Tho we decided against it for 2009, it was the first year we had considered taking the boy along. We’re fast approaching
the point where we’ll want him having the con experience.

When it comes down to it, I may wait for my son to ask before deciding to take him along.
What conventions do you go? Do your geeklets partake? How old were they when you let them come along?

2 Maker Faires to Choose From This Weekend in the Northeast