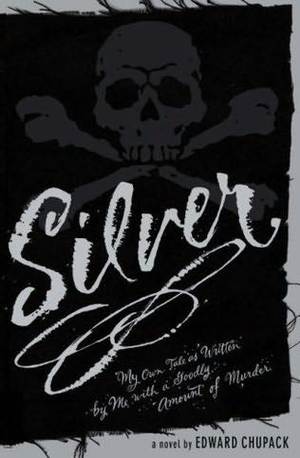 I always loved Treasure Island as a child. Resembling a Victorian techno-thriller, readers were treated with songs, deception, pitched battles, lost treasure and heroism. The book’s primary villain, Long John Silver, also represented one of its most original and creative characters. Jim was the plucky cabin boy, Captain Smollet skippered the ship, and Doctor Livesay filled the role of the local always-right physician. But Silver was the one-legged ship’s cook, nicknamed Barbecue by the crew. Charismatic, cunning and deceitful, he seemed more than just a simple pirate.

In Silver: My Own Tale As Written by Me with a Goodly Amount of Murder, first-time author Edward Chupack takes Silver and gives him his own story. Written in diary form, Silver describes his beginning as a beggar boy who finally convinces a pirate captain, Black John, to take him to sea. Eventually, of course, Silver battles his way to become captain of his own vessel. Silver’s unique voice tells the whole story, but I never got tired of his pirate drawl. The author makes authentic-seeming use of nautical terms, and the whole book feels extremely plausible and authentic. Silver drops more than a few explanations of how ships work, and while I couldn’t say if they’re accurate, they seem that way. To have an expert’s voice carry such authenticity is a great accomplishment.

Chupack gives us two central subplots. The first involves treasure, of course, a centuries-lost hoard hidden by riddles and ciphers. Silver dribbles hints through his writings to keep readers enthralled. The other subplot involves the identity of Silver’s betrayer. At the beginning of the book, Silver is locked in his own cabin, being shipped back to England for a hanging. He never mentions his betrayer’s name, merely calling him "the captain" and we are left to guess until his identity is revealed. Of course we’re dying to learn whether and how Silver escapes from this fate to return to his pirate ways.

If you’ve read Treasure Island you’ll notice Silver makes little attempt to be true to its progenitor. Most of the characters from the original get at least a mention. Some who were huge in the first book get killed off with only a passing nod. Others who were killed off in Treasure Island see many pages of Silver. I won’t play the spoiler by giving you too many examples, but I will say this: It’s more than just changing the circumstances of the characters or the nature of events that affect these individuals. Some of the characters see some radical changes. Silver just has a limp, rather than missing a leg. Blind Pew is still blind, but simply simply lost his eyesight rather than being blinded by a broadside. The pirates’ dead skipper from the original, Captain Flint, isn’t in the book at all. Their murderous bosun, Israel Hands, has a completely different personality. Ultimately, and I speak as a huge Treasure Island fan, I felt a vague sense of dissatisfaction with these changes. I enjoyed the hell out of the book, but there was still that niggling irritation whenever one of the awesome characters from the original got twisted around.

One character change particularly galled me — the title character’s. Stevenson’s Long John Silver was never a captain, and never wanted to be a captain. He was always a cook, and therefore possessed an appealing ambiguity. He was respected by his peers and did in fact have a nigh-skipperly aura, but he always led from behind the scenes. Conversely, Chupack’s Silver becoming captain carried such predictability that I felt cheated. The Silver I loved was far more sneaky and clever than that. But don’t misunderstand, while I had some characterization concerns, Silver’s appealing roguishness remained largely true to the original, and is more than enough to carry the book.

In Silver, Chupack spins a fantastic pirate yarn, packed with all of the piratical trappings we’ve come to love. He does such an outstanding job it’s easy to forget it’s a freshman effort.

WIRED: True (mostly) to the spirit of Long John Silver and an absolutely entertaining read — if you love pirates, this is your book.

TIRED: Plays fast and loose with the immortal classic.