I’d reckon most of readers will have seen this video of a truck dumping its payload of shopping carts (and if you haven’t get to it!).  Adam Weiner over at Popular Science points out that it is more than a demonstration of people being stupid.  It’s a great example of Newton’s First Law of motion.

Newton’s First Law tells us that "an object at rest will remain at rest and an object in motion will remain in motion, at a constant velocity unless acted on by a net external force." What’s happening in the video is similar to the old tablecloth trick. You can pull a tablecloth out from under a pile of dishes if you do it quickly, because, while a force accelerates the tablecloth, as long as the tablecloth doesn’t apply a significant force on the dishes, they’ll stay where they are, in accordance with the First Law.

In the video we replace the dishes with shopping carts and the tablecloth with a tractor trailer. The truck then accelerates out from underneath the shopping carts. Now, if the carts had no wheels, the friction between the carts and the floor of the trailer would probably be sufficient to accelerate them along with the truck. No such luck.

I’d love to see a high school physics curriculum based around humorous Youtube videos.   If you happen to find a video that fits the bill post your examples in the comments.  One rule:  they can’t be straight out of classroom lectures. 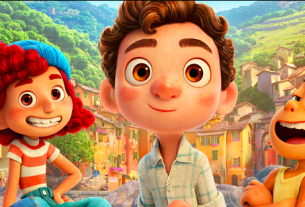