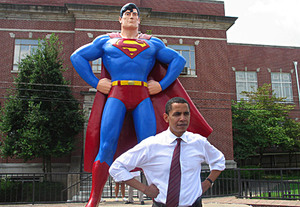 If you’re a regular GeekDad reader, you know that we don’t toot our own horn that often. But we, and specifically I, got an awesome Christmas/Hanukkah present from Seth Borenstein of the Associated Press: a wire story mentioning GeekDad, with several quotes from me.

Two days after Election Day, I wrote an article for GeekDad titled "5 Signs President-Elect Obama Is a Geek." The article got linked to in lots of places, and I was interviewed for an article that appeared early this month in the Huntsville (Alabama) Times about the future of NASA under Obama. But I was blown away when I was contacted by Borenstein to talk about Obama being a geek. He and I had a great chat and a short followup via email, and then two days ago (on Christmas Eve) he let me know the article was going to appear on the AP wire.

So, suddenly, my name and GeekDad’s name are appearing on cbsnews.com, on abcnews.com, on many other websites, and in newspapers across the country. Our illustrious editor, Ken Denmead, tells me that the article appeared on the front page of yesterday’s San Francisco Chronicle! I hope my comments in the article are generally well-received, particularly by geeks and by President-Elect Obama, should he read it.

I’d like to express my thanks to Seth Borenstein for contacting me in reference to his article, for quoting me faithfully, and for getting the information about GeekDad absolutely correct. I’m ecstatic that GeekDad is getting such great publicity, because I love writing for it, and I’m thrilled (though a bit overwhelmed) by the publicity I’m getting as well.