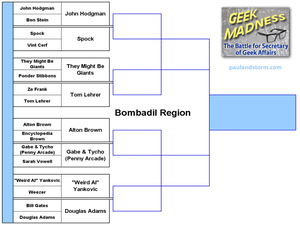 Geeky musicians Paul and Storm have created what might be the ultimate showdown of ultimate geek destiny:

…as the first geek President, Barack Obama would do well to reward this important and influential constituency by creating a new cabinet post: the Secretary of Geek Affairs.

And it’s up to YOU (the collective you, that is) to make sure the right person gets the job. As such we present GEEK MADNESS: a 64-“team” elimination tournament decided by public voting as to which person (or persons), real or fictional, is best for the job.

The list of candidates is an amazing squee-fest: should Wil Wheaton defeat Wesley Crusher? Is Spock better suited than John Hodgman? Steve Jobs or Steve Wozniak? I can see going on like this for decades, so it’s amazing no one has thought of it before.

There’s no sign-up process, so voting is as simple as a couple clicks per faceoff. Voting is already over for Round 1 in two of the four regions (Bombadil, Do’Urden, Jor-El, and Lobot, naturally), so be sure to cast your vote now.

We also posted about this earlier, but it bears repeating as the tourney carries on.