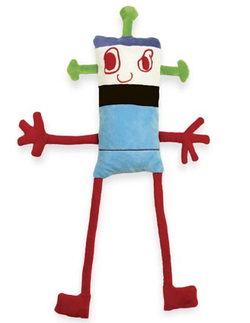 If you’re a parent, you’ve probably, at some point, looked at your young child’s drawings of strange and wonderful creatures and wished there were some way you could bring those creatures out of the 2D world into the 3D one. I wrote an article last week about software that would let you design a plush toy and print out instructions on how to sew it, but, if (like me) you lack sewing expertise, there is another option.

I’ve just come across a service called, appropriately enough, "Make My Own Monster." It’s run by North American Bear Co., and it sounds pretty simple, if expensive. They send you a kit that includes drawing materials for your child (or you, if you want, of course) to design the monster and a questionnaire to help you and/or your child describe its personality. You send the kit back, and the designers at the company will create a one-off plush toy based on the drawing and description. The cost is $249, which is likely prohibitively expensive for most people, but I don’t think it’s overpriced, considering that you’re getting a completely unique plush toy created by professionals. (Of course, they won’t let you use copyrighted characters, so you would have to explain to your kids that Batman and Troy Bolton, for examples, are out.)

If you can’t afford that price, there is an alternative. The company sells a good selection of monster toys made with the same process, based on designs from the company’s employees’ kids, and they’re much more reasonably priced at $16 each. So what you could do, if you don’t mind being devious, is "help" your kids design a monster that looks a lot like one of the pre-made ones, then buy one and pretend it’s only for them. The only trouble would be if you happened to run into another child who had the same toy, but that seems pretty unlikely, since it’s not as though they’re as popular as Uglydolls. To make this idea even more appealing, the company donates a portion of each monster sale to Global Action for Children.

I’m not likely to actually do this unless I win the lottery, since it’s prohibitively expensive to me, too. But I thought it was too neat not to write about.