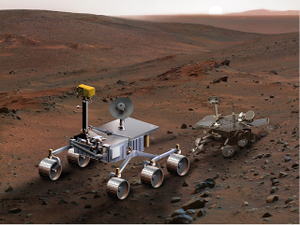 Back in 2003, NASA partnered with LEGO and The Planetary Society in asking children to name the two Mars Exploration Rovers, Spirit and Opportunity. This time around the space agency has teamed up with WALL-E (a natural choice) to invite kids to name the next Mars rover, the Mars Science Laboratory.

The NASA press release has the details:

The contest begins Tuesday, Nov. 18, and is open to students 5 to 18 years old who attend a U.S. school and are enrolled in the current academic year. To enter the contest, students will submit essays explaining why their suggested name for the rover should be chosen.

Essays must be received by Jan. 25, 2009. In March 2009, the public will have an opportunity to rank nine finalist names via the Internet as additional input for judges to consider during the selection process. NASA will announce the winning rover name in April 2009.

Disney will provide prizes to students submitting winning essays, including a trip to NASA’s Jet Propulsion Laboratory in Pasadena, Calif., where the rover is under construction. The grand prize winner will have an opportunity to place a signature on the spacecraft and take part in the history of space exploration.

Note that the minimum age is 5, which means the Geeklet is totally entering this. That also means that "essay" doesn’t necessarily mean a 500-word masterpiece. The grand prize in the last contest was won from the heart:

I used to live in an Orphanage.
It was dark and cold and lonely.
At night, I looked up at the sparkly sky and felt better.
I dreamed I could fly there.
In America, I can make all my dreams come true…..
Thank-you for the "Spirit" and the "Opportunity"
— Sofi Collis, age 9