I love comic books. More than that, I love comic book shops – the tactile experience of browsing the shelves, seeing what new comics have come in each week, and finding a hidden gem I’ve been looking for.

Unfortunately, I’ve always been a little disappointed in the comic books shops near where I live, for a couple of reasons. First, the closest one is about 25 minutes away, so shopping is – at the very least  – a 90 minute commitment. Second, I’ve never been much of a superhero reader. Sure, I’ll read an occasional Batman or Punisher, but post-apocalyptic and horror comics are what I really like. And unfortunately, these titles are few and far between in my local stores’ inventories. 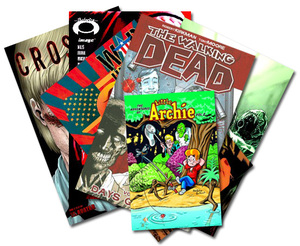 I had tried doing some shopping at Web stores, but had never been very happy with selection or service — until now. Recently, I found a site that has pretty much everything I’ve ever wanted in an online comics store, and some other things I hadn’t even thought about.

HeavyInk, which started about a year ago (and is still in beta), is founded by the people behind the educational DVD rental site,  SmartFlix. The HeavyInk site is unique in the fact that it not only sells comics, but it also is heavy on customer-friendly policies and features that position them as being the premier comics destination on the Web.

As with many new sites, HeavyInk has put an emphasis on social networking. Each user has the ability to post his own blog, post unique, individualized lists and write his own reviews. Add some forums and Facebook-like features and the setting is right for a strong community.

What’s more, HeavyInk’s pricing is very friendly – every item is 20% off and shipping is free, no matter what the size of the order. Subscribe to as many series as you want and cancel any subscription or order up to when it ships. Ordering all cover variations is as easy as checking a box and their search makes it easy to find an author, no matter how you spell Mark Miller … er … Millar.

Plus, they’ve got such a wide selection, I can also pick up the Archie, Scrooge McDuck & Power Pack books I’m indoctrinating my kids with.

Sure, I’ll still make a regular trek to my local comic book store, but – for now – HeavyInk fills all my comic needs.