I’m not sure which came first; crop circles or corn mazes, but corn mazes are big business this time of year.  Crop circles, not so much.  Actually, according to the cornmazesamerica website -yes, there is actually a web site dedicated to all things corn maze- the first corn mazes showed up in the US during the early 1990s.  So I guess crop circles were first after all.  But, given that crop circles are allegedly created by extraterrestrial visitors or by some other supernatural means, their creation is kept pretty much on the down low.  Corn mazes, on the other hand, have spawned entire companies that specialize in designing, planning, planting and operating a maze.  The commercial availability of GPS technology really seems to have given this unlikely business a kick start and has led to incredibly complex creations that would have been very difficult, if not impossible, to achieve only a few decades ago.  Some operators have even tried their hand at maze designs that reveal advertising, political or inspirational imagery when viewed from an aerial vantage point.  Here’s a classic example– too bad I didn’t stumble across this site during Pirate Week.

While I took the boys to good old Storybook Gardens for the day -home to a modest, non-corn maze (see photo) 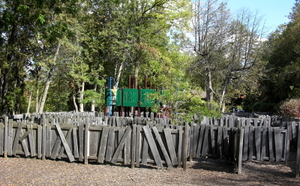 – my daughter visited the Belmont Corn Maze with one of her friends.  They spent the better part of the afternoon there and, reportedly, it was a good time.  Belmont starts mixing things up with a Halloween haunted maze in a few weeks, which seems like a pretty good way to induce a little more panic into the mix.  I have no doubt that at least some of the hundreds of commercial corn mazes out there offer a paintball option as well- if being lost in the middle of 20 acres of convoluted, eight foot high corn stalks isn’t disconcerting enough, how about having a team of guys loose in the labyrinth, hunting you with a paintball gun to ratchet up the adrenaline a bit?