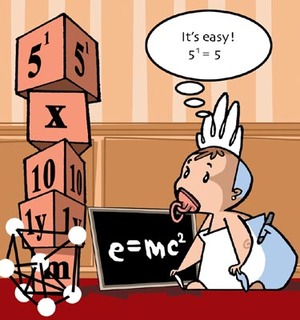 Apart from straight teeth perhaps, "genius" is probably one of the most envied of human qualities. Certainly modern parents have been known to overstate their child’s brain power once in a while, as fellow GeekDad Matt Blum revealed last month.

But even still, it is Nobel Prize season once again where the rewards of genius are made evident to the world. Is there a Nobel Laureate among our readers? (Are any of them geekdads?) Just checking.

For the rest of us who only dream of a Nobel, Discover magazine has a fun list of "20 Things You Didn’t Know About Genius" to help us all put smart into perspective. Mostly it is list of Nobel trivia sure to indulge the factoid center of the brain but there are some interesting nuggets. Like number 12:

12. Albert Einstein is said to have lost most of his Nobel money in bad investments. Anyone can do that.

Poor Albert (literally). The misunderstood bumbling genius is a timeless stereotype but it is not all it’s cracked up to be.

17. In the 1990s Bell Labs found that its most valued and productive electrical engineers were not those endowed with genius but those who excelled in rapport, empathy, cooperation, persuasion, and the ability to build consensus.

That would apply to just about any geekdad with two or more kids! I feel better about myself already!