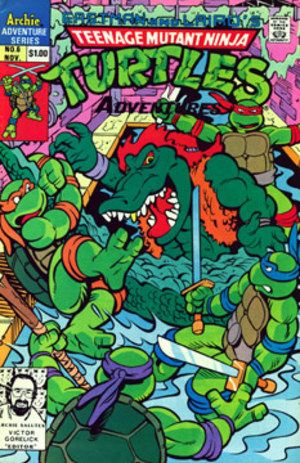 It goes without saying that comic books are an important part of the Geek domain.  Sadly, I gave my collection away years ago.  Well, maybe it was decades ago, but really, who’s counting?  And maybe I didn’t give it away so much as trade it for a case of beer or something like that.  But one of the cool things about being a parent is rediscovering things that were pushed aside at one point to make room for “grown-up” stuff- things like comic books.  With a pair of almost six-year old boys and an eight-year old daughter, I’d been tentatively introducing comics to them over the past year to see if anyone would bite.  Reaction was a little tepid at first and I’ve been experimenting with different titles, but things really took off this summer when I made a big stash of comic books part of our camping equipment.

I was in Toronto for work one day and got totally soaked walking back to my hotel in the rain that afternoon – not a fan of cabs.  Like any sane person would do, I decided against lounging around my room and watching TV in a dog-hair, cat and yelling kid-free environment and instead ventured back out into the storm and proceeded to spend the next several hours sloshing around downtown and raiding every comic store I could find, determined to put together a sizable comic book stash.  I’d gotten it into my head that a critical mass of comics combined with a rainy camping night might be the trigger that won them over.

Like other GeekDads have found (Take Jacob’s February post on the subject, for example), I quickly discovered that it can be a lot of work to find kid-friendly comics.  I scoured the bins and bugged the sales staff.  Usually I’d get an odd look -might have been the dripping wet and probably slightly crazed appearance or maybe the old dude with the umbrella asking for Uncle Scrooge freaked them out- but once I was directed to a pile of boxes stuffed under a table that turned out to be full of discounted Archie comics.  Jackpot?  I picked a few, but I could only ever deal with so much Archie…  Determined to hit that critical mass, I kept at it until I’d visited four shops and blown nearly $150.  Funny, the last time I actually bought a comic for myself, I think I recall it being $.25 or something like that, but hey, you can’t put a price on fun and reading, right?

I’m happy to say, it was worth the effort -I keep the comic books stashed in the trailer and when we’re camping, the kids are all too happy to see bad weather or to call it a night.  And it’s better than pulling out the GameBoys.  I picked up a few recommended titles from Ken’s 10 Superhero Comic Books Your Kids Should Be Reading post (Marvel Adventures Iron Man, Teen Titans Go! and Marvel Adventures Spider Man), but most of my finds were more cartoonish and decidedly old-school: Duck Tales, Richie Rich, Transformers, Teenage Mutant Ninja Turtles and Scooby-Doo along with a few more current cartoon-based selections like The Simpsons and Futurama.

I keep adding to the collection and it doesn’t take much arm-twisting from the kids for me to “borrow” their comics for a read.  I’m hoping we can get past Richie Rich and work up to some of the superhero titles, but all in good time.  In the meantime, the most sinister villains I get to see are the Beagle Boys…

Some Cool Images from Wondercon 2009

Robot Season: Is a Robot Ever Really Done?