We’ve had a lot of posts about newer movies here on GeekDad, but everyone knows it’s important to read classic novels in order to properly appreciate modern ones, and, likewise, it’s important to watch classic movies.  Now, many classic movies are too complicated or too intense for kids, so it seems appropriate to start the discussion with comedies.  Here are ten comedies that are essential viewing for every geek: 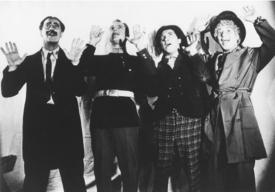 1. Duck Soup – It’s hard to pick just one Marx Brothers movie, but this is probably the easiest one for kids to appreciate. The songs in Duck Soup are all silly ones, unlike in most of their movies. And there’s tons of slapstick, like the scene with Harpo, Chico, and the lemonade vendor, and of course the famous mirror scene.  The political satire will go right over most kids’ heads, but teenagers will love it.  The only thing to watch out for is a then-acceptable, now-racist line from Groucho: "The Headstrongs married the Armstrongs and that’s why darkies were born."

2. The Court Jester – Danny Kaye was a comic genius, and this is one of his best movies. It’s accessible to kids because of the Robin Hood-era setting, and the story is, while not uncomplicated, mostly unnecessary to enjoy the funniest bits.  Plus, it’s got Basil Rathbone parodying himself, and Angela Lansbury as a self-absorbed princess.  You can’t miss.

3. Sons of the Desert – Laurel and Hardy’s best, with all the lines delivered with their trademark comic precision. While they made at least three other movies with essentially the same plot as this one, it’s probably the best introduction to the pair.

4. The General – Probably Buster Keaton’s best movie, with some of the most amazing stunts ever performed on film. The movie simply never stops moving start to finish, and has enough slapstick and other visual humor that most kids probably won’t care that it’s a silent film. 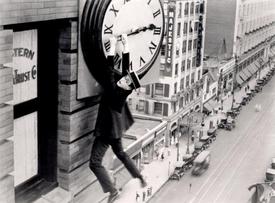 5. Safety Last! – Another silent, this is the Harold Lloyd film where he famously hangs from the face of a clock. It’s short, very funny, and amazing to watch the stunts. Plus, if you take our advice and show your geeklings Back to the Future, they’ll recognize the homage in the clock-hanging scene in that movie–and you can tell them about the Harold/Christopher Lloyd connection, too (though they’re not related).

6. Buck Privates
– Show your kids "Who’s on First," of course, but that’s only four minutes long. As their movies went, Abbott and Costello didn’t get much better than they were in their first big movie. It’s funny throughout, but is worth it just for the scene where Costello explains to Abbott that 28 divided by 7 is 13, which may possibly not be good for kids still learning early math skills (kidding!). 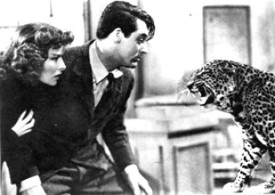 7. Bringing Up Baby – Cary Grant. Katherine Hepburn. A leopard. One of the best screwball comedies ever made. What more could you possibly want?

8. Modern Times – More slapstick, with its master Charlie Chaplin.
Most kids won’t get the social commentary, but the Little Tramp is bound to appeal.  Worth it just for Chaplin’s famous trip through the machinery.

9. The Great Race – The most recent movie on the list (1965), this Jack Lemmon/Tony Curtis film isn’t as great as Some Like It Hot, but is much more accessible to kids. It’s ostensibly about a car race around the world, but it’s really about as much slapstick as Blake
Edwards could fit into a movie with a whole bunch of great actors.

10. It Happened One Night
– The original screwball comedy, with Clark Gable at his most charming.
You can even teach the kids a bit about the time period, mentioning the possibility (unconfirmed) that sales of men’s undershirts may have fallen drastically after the scene where Gable takes off his shirt to show his bare chest.

As usual, please add your own suggestions in the comments.