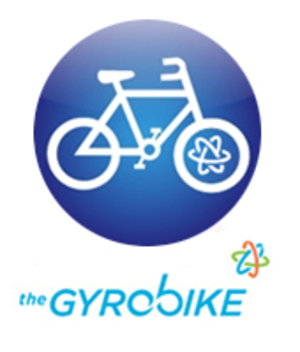 We recently took a look at different methods parents use to teach their kids how to ride bikes. We looked at everything from trailer bikes to taking off pedals. But there was one more approach that we wanted to consider. It wasn’t included in the original post for several reasons: first, it’s not available yet, so it didn’t belong with the other options we evaluated. Second, it’s so unique that it deserves its own post so we can take a closer look at it.

We came across the Gyrobike while doing research for the previous post. The name Gyrobike is a little misleading. While the company plans to release a fully branded bike, the initial push will be selling a gyro system that fits inside a wheel similar to a regular bike wheel, plus a starting system.

Gyrobike uses gyroscopic principles to stabilize the bike and its rider. An independent flywheel, spinning within the front wheel, creates a force that stabilizes the bike, sensing when the bike becomes unbalanced and correcting weight before tipping occurs.

The results seem to be remarkable. After starting the flywheel, the weighted, inner wheel begins spinning and the bike is stable and ready to ride. At very, very low speeds, the Gyrobike maintains astounding stability compared to a normal, unaided bike. At just 2 mph, the Gyrobike has the stability of one moving at 10 mph, making riding much easier for riders — since balance is assisted.

The differences between a regular bike and a Gyrobike are small. The wheel is slightly heavier than normal, requiring a bit more input when maneuvering, but otherwise differences are minimal. The real benefits are when starting or at slow speeds – the two times that beginning riders are most likely to fall.  While the Gyrobike won’t prevent a bike from falling over, it will – when used properly – significantly reduce the chance of happening.

The Gyrobike is being developed in sizes for both adults and children, and the gyrowheel is expected to cost less than $60. There are no set specifications or costs for the full Gyrobike. It was originally supposed to be released in 2007, but manufacturing and production delays have pushed that date back to Spring 2009.