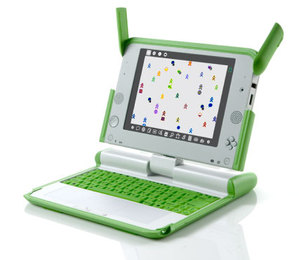 Last November and December, the One Laptop Per Child project had a program called "Give One Get One," whereby you would pay for two laptops, get one yourself  and send one to a child in the developing world.  This holiday season, they’re doing it again, only this time in conjunction with Amazon.com.  They haven’t announced the price yet, but last year the cost was $399 plus shipping.

This is great news, both because Amazon has resources to process and ship orders that the OLPC initiative does not have, and because this year the laptops are dual-boot!  Yes, last year’s laptop, which my kids have greatly enjoyed using since they got it for Christmas, booted only with the Linux-based Sugar operating system, but now the laptops will boot with Sugar or Windows XP.  This may anger some Microsoft-haters, but this seems awesome to me, because most people in the general population will feel more comfortable with a computer running Windows than running Linux.  And that, plus Amazon selling it, makes it likely that this offer will be a huge success, which can only be a good thing.

So if you have kids, or know someone with kids, who’d love to have their own cool little laptop that can take a bit of a beating, put this on your shopping list.  It’s not often you can buy a present that the recipient will love that at the same time makes you feel great for giving it.  Don’t miss out on this one.

UPDATE: The laptops will, sadly, not be dual-boot after all.  Thanks to funfly for the heads-up.

Preview: Discovery Channel’s Prototype This! Takes the MythBusters Formula and Builds on It

Isaac Newton and Physics for Kids