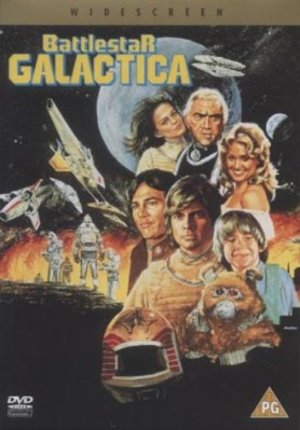 The GeekMom and I have now introduced the kids to another show we watched growing up: Battlestar Galactica – the original from the late 1970′s.  The kids recognized some faces from other shows, and we laughed a bit at the special effects.  I think we’ve hit on another series that the kids will enjoy watching.

We’re watching the first disk which only includes one episode, “Saga of a Star World,” where it begins with the twelve colonies of humans gathering for a peace agreement with the Cylons.  The humans are betrayed, and all battlestars (except the Battlestar Galactica)
are lost in a surprise Cylon attack.  Each of the planets that the twelve colonies have come from are simultaneously attacked.

The Galactica returns to their home planet to find it in ruins and very few survivors. Realizing that there is certain death by staying,
Commander Adama (played by Lorne Greene) leads a rag-tag fleet of ships carrying as many people as possible.  They then make the decision to search for the 13th colony of humans living on a planet called Earth.

In addition to Lorne Greene, there is Dirk Benedict, Richard Hatch,
Terry Carter, Herb Jefferson Jr. and  Maren Jensen.  Jane Seymour makes an appearance for a few of the episodes, and Rick Springfield lasts eighteen minutes as Zac before being killed by Cylon attack fighters.  The kids recognized Alex
Hyde-White from watching Buck
Rogers in the 25th
Century.

Battlestar Galactica seems to be influenced by Star Wars through the fonts in the opening credits and through some of the costuming. This seemed apparent to others as well with wikipedia detailing Universal and Twentieth Century Fox suing and counter-suing over copyright infringement, even though Glen Larson had been pitching the idea since the late 1960′s.  It was the success of Star
Wars that allowed Adam’s Ark (the original title for
Battlestar Galactica) to get the green light.

The special effects seem funny compared to today’s CGI.  In several space shots, the poles holding the models are blurred out but obvious because the blackness of outer space is not quite the same as the rest of the screen.  The same blurring is seen as smaller ships fly around larger ships.  It takes away a bit of the magic, but it still keeps the kids’ interest.

We’re watching Battlestar Galactica via Netflix – where it is available as a DVD or for instant viewing. It’s also available on
Hulu or you can get the entire boxed set at Amazon.
The kids are already asking when the next DVD is going to show up.
I’m guessing they may also be interested in Space
1999 and V, but I think we’ll save those for the winter.

Logitech or Belkin — Which Is the Best Keyboard for the iPad Mini?

Cool New Game Asks: Are You the Traitor? 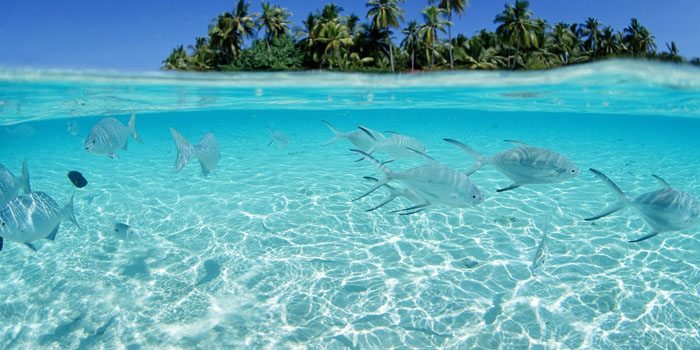