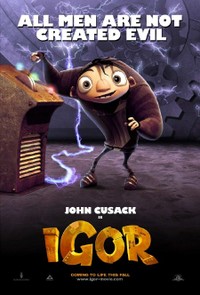 I honestly have been trying to come up with some positive things to say about Igor, the new CGI movie featuring the voice-over talents of John Cusack, Molly Shannon, Jay Leno, and Steve Buscemi among others. I really have. I even tried to draw out an opinion from my 5-year-old who accompanied me but his favorite part of the night was seemingly the funny lines from the Bolt preview. Read more (with spoilers) after the jump.

The movie has got a clever premise that appeals to the strange and geeky in all of us. The once sunny and prosperous land of Malaria has been plunged into stormy darkness making everyone miserable and bereft. King Malbert saves his land by convincing everyone that the way back to prosperity is to create things so dangerous and malevolent that the world will have to pay Malaria dearly to not unleash them on the world. (The allegory of U.S. technological and economic hegemony will go unaddressed here, dear readers.) As a result, a whole evil scientist caste has arisen to become the key to Malaria’s prosperity, each dutifully assisted by the underclass of Igors who abide their every whim. The sole purpose of the scientists is to create the most dangerous inventions possible – in crude steampunky fashion – and compete in the annual Evil Science Fair for gold and glory.

One Igor, however, is not content with his station in life and is cursed with the drive to invent. He dreams of winning the Evil Science Fair with his master plan to create life but he is, after all, just an Igor who will get recycled if he’s ever found out. His sidekicks Scamper, an immortal rabbit with a death wish, and Brain, a stupid brain in a jar who messed up his own name and is thus "Brian" throughout the movie, wisecrack and bicker their way throughout and provide much needed comic relief in a movie that is otherwise devoid of the funny.

After Igor’s scientist master Dr. Glickenstein (John Cleese) is blown up by one of his experiments, Igor hides this fact and embarks on fulfilling his dream. He creates "Eva," a misshapen monster whose evil bone is not working and so would rather be an actress than destroy anything. Igor selfishly tries to make her into what he and Malaria expect from her even as he is defying that very thing, but the irony is lost on him and on us unfortunately. Of course, the conniving and flamboyant Dr. Schadenfreud (Eddie Izzard) has gotten wind of this tremendous invention and must have it for himself so he can win the
Science Fair and take over Malaria.

Along the way we get to see some outrageous characters, some artsy scenery, and some cool laboratories, but where it is all taking us is anybody’s guess. The design takes its cue from stop motion animation and the likes of The Nightmare Before Christmas with good effect.
You’re taken into a heavily stylized world that looks great but I left wishing I could have seen more crazy mechanical inventions.

In the end, our clever Igor falls for Eva, realizes the king is a sham, and reveals the truth to his compatriots. Just like that, the people forget their prejudices and make Igor their new president. Okeedoke!
The movie is rated PG, presumably for the fact that Scamper tries to off himself throughout the movie and Igor’s master is killed ten minutes in. Otherwise, the movie is devoid of anything scary and is fairly kid friendly. As I said, my 5 year old didn’t have much to say about it – which is unlike him – mainly because it was so confused and hard to follow I’m thinking. Igor is good CGI romp that’s sweet on the eyes, but painful on the brain – or is that brian?

GeekDad Puzzle Of The Week: But What About The Liner Notes? 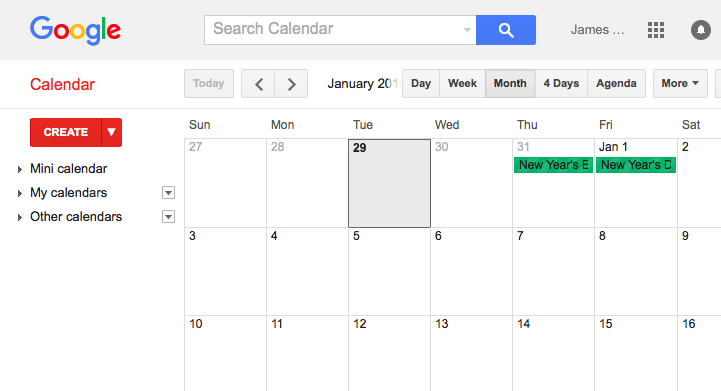