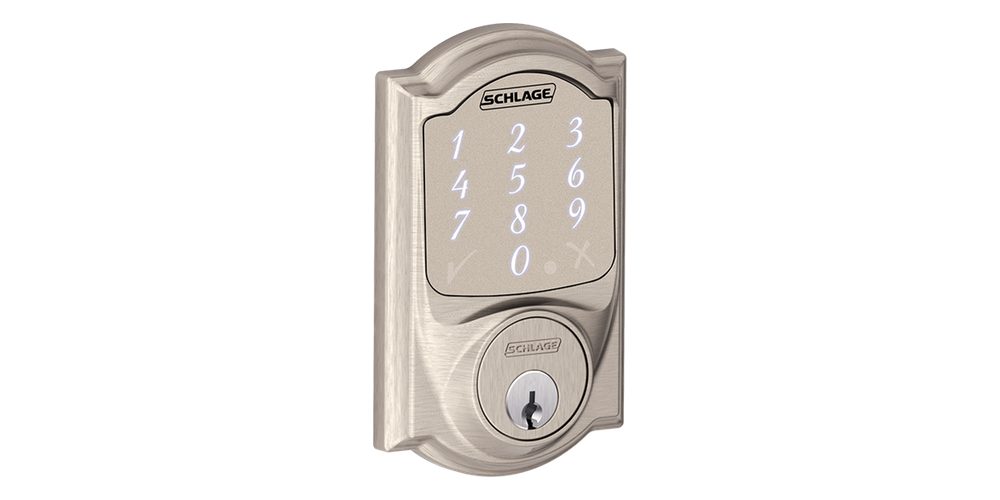 The connected home has great promise, but between basic functionality, universality, and the importance of security, it feels like we’ve been taking baby steps. But we’re starting to see second- and third-generation devices and ecologies hit the market, and things are just getting better. Case-in-point: the Schlage Sense Smart Deadbolt. [Note: Schlage sent me a unit for review.]

I’ve had the previous-generation Schlage Connect for a couple years, hooked up to an Iris (by Lowe’s) hub, and it worked fine (as long as we kept the $10/month subscription service). The mechanics of it didn’t actually lock and unlock at a remote signal – rather it engages a knob so a person at the door can turn it manually; not quite as cool. But the ability to give specific people codes that only work on specific days, and knowing remotely when it’s locked or unlocked, was great.

The new Schlage Sense is definitely a generational improvement. First, it works with Apple’s Homekit automation, which means we can drop the Iris subscription (as long as we have an AppleTV on our home network to act as the hub instead). That saves a chunk right there. It also means the integration into our iPhones is better. Especially cool is the ability to lock and unlock the deadbolt using voice commands via Siri.

For example, imagine one was to name one’s front door deadbolt “Tardis.” One would then be able to speak the command into one’s phone to “unlock the Tardis!” and voila, the door unlocks. Yes, I did that. Yes, it’s awesome.

Also cool: the deadbolt now has an actuator that literally unlocks the door, which is what you really want.

Installation is quite reasonable. If you’ve ever installed a deadbolt before, you can install the Sense. If you already have a deadbolt on your door, it should be simple to just swap it out. There’s just a little added step of some wires running from the outer part of the unit, through the hole in your door, and connecting to the inside part of the unit. Plus, it needs batteries.

After installation, there’s setup – it is a connected device, after all. You have to have an iPhone, iPad, or iPod touch on iOS 8.4 or higher, and the Schlage Sense app installed. It’s important to follow the instructions specifically and in order – luckily the app itself has an installation video included, which helps make things very clear. The lock pairs with your phone via Bluetooth, then gives you a HomeKit setup code to integrate it into the system. You may need to go to your AppleTV and log out of, and back into iCloud to finalize the connection (this is one place where a little more feedback while setting it up would have been nice).

HomeKit lets you manage the unit very simply, adding users to your managed “home” and granting them access to the unit with specific codes, or if they have iPhones, letting them use the Schlage app and Siri for access. The one thing it’s missing at the outset is the ability to send notifications when it locks and unlocks (which the previous Connect could do via the Iris hub). But Schlage has promised me the feature will be added via firmware update soon. They were very clear, though, that there would be no automation features based on proximity, such as unlocking when you get within 100′ of the house. Schlage’s opinion is that activating the lock must be an active choice, rather than a passive one, for the sake of security.

For code entry, there’s a touchpad on the outside of the deadbolt that works very well. It even lights up at night once you’ve tapped it. It also has a “Schlage” button on top that you can use to lock the deadbolt when you exit.

The bottom line is that the Schlage Sense really feels like one part of the connected home has finally arrived. The unit comes in a classic “Camelot” model, as well as a more modern “Century,” and in a variety of finishes. There are also matching handsets.

You can buy the Schlage Sense Smart Deadbolt at your local Home Depot, or online at Amazon.com ($229).

Never Tell Me the Odds: A Look at Star Wars Tabletop Gaming’s Past and Present