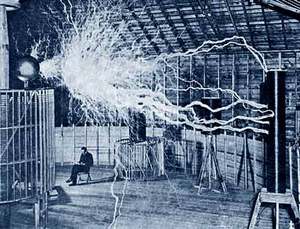 My TV show pilot called "History Hacker" airs this Friday September 26th at 8PM and Midnight on the History Channel.  I’m the host of the show and I check out inventors in history and take a hands-on look at their inventions and then break it on down and hack the inventions together.  I need your help to make the show go from a pilot to a real TV show.

The pilot is all about Nikola Tesla and the war of the currents between Tesla and Edison.  In the show I learn how to blow a neon tube, explore wireless electricity and build an AC generator from a bike. I also go to Boston to visit an MIT space lab to see how the principles that Tesla pioneered are being applied to space propulsion.

The look of the show is awesome. The folks at History gave the producer, director, and director of photography permission to take my DIY style of making videos with lots of jump cuts and direct talking to the camera and push it forward into a longer format. It doesn’t look like anything else on TV.

History Channel, 8pm and Midnight, this Friday. If you like what you see, support the show by posting on the show’s message board on History.com. You can also post pictures of yourself watching the show to HH’s Flickr group.

How to Dress Up Your Raygun