It has been a long time coming, but DC Comics‘ most famous female superhero finally comes to small screens in her own movie today. Some might try to dismiss Wonder Woman without a closer look — it’s an animated film and it’s direct-to-DVD — but they’d be fools to do so. This updated take on the classic warrior-in-a-strange-land tale is an enjoyable mix of butt kicking and empowered romantic comedy that will satisfy geek guys, gals and kids alike.

The action starts (and starts big) in a past millennium, where the Amazons are fighting for the fate of all humanity. They take on the armies of Ares, god of war (voiced by Alfred Molina), whose very proximity inspires chaos and conflict. The Amazons battle gargoyles, Minotaurs and other dark members of classical mythology, while Ares watches it all, literally feeding on the death and destruction.

But Queen Hippolyta (Oscar nominee Virgina Madsen) isn’t afraid to bring the battle, and a bit of tragic vengeance, straight to the gods. To draw Ares out, and to make him angry and careless, she kills his son on the battlefield. The anti-Oedipal nature of the act is that this is Ares’ son from an act of rape he committed on Hippolyta.

No, this isn’t your average Saturday-morning superhero cartoon. Wonder Woman is a PG-13 movie, and doesn’t shy from it. Indeed, producer Bruce Timm has admitted that the first cut of the movie sent to the MPAA received an R rating. Parents may want to screen the movie before showing it to younger kids, but Wonder Woman is much more palatable for younger kids than, say, Superman: Doomsday. 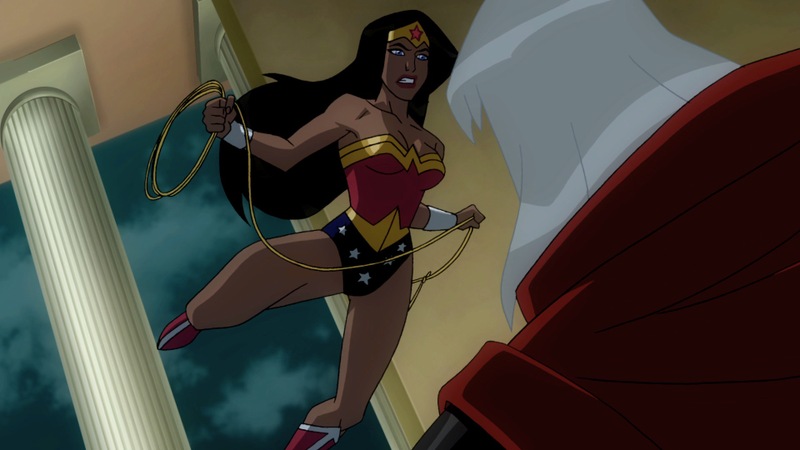 Ares is defeated, but the gods intervene to keep Hippolyta from exacting ultimate justice. Ares’ dad Zeus (David McCallum of The Man from U.N.C.L.E. and NCIS) can’t bear to see his son killed, but at least mom Hera (Marg Helgenberger, China Beach and CSI: Crime Scene Investigation) understands things from a woman’s point of view.

Ares will be imprisoned under the Amazonians’ care, and his powers capped with a pair of magic wristbands. To assuage Hippolyta’s outrage at justice denied, Hera gives the Amazon women on the hidden isle of Themescera extended lifespans so they can perfect their manless paradise. And she grants Hippolyta one more gift — the chance to have a daughter without needing one of those horrible, nasty, and brutish men to plant the seed.

That’s the setup that brings the story into the modern day. Fighter pilot Colonel Steve Trevor (the always hilarious Nathan Fillion, Firefly, Dr. Horrible) gets shot down over the Mediterranean by nasty middle-easterners with black jet planes. Fatefully, he crash lands on Themescera, only to be found by the now grown-up Princess Diana (Keri Russell, Felicity, Mission Impossible III).

Trevor is something of a charming rogue, intriguing Diana and confirming most of her mother’s negative images of the male of the species. Hippolyta is ready to execute him and be done with it when Ares escapes, and the fate of the world once again comes into peril. Now they need to send Trevor back to the world of men to warn them of the danger Ares poses, and one Amazonian must go with him as the ambassador from the hidden isle. If you remember anything of your Wonder Woman origin story, you’ll easily guess who gets the job. 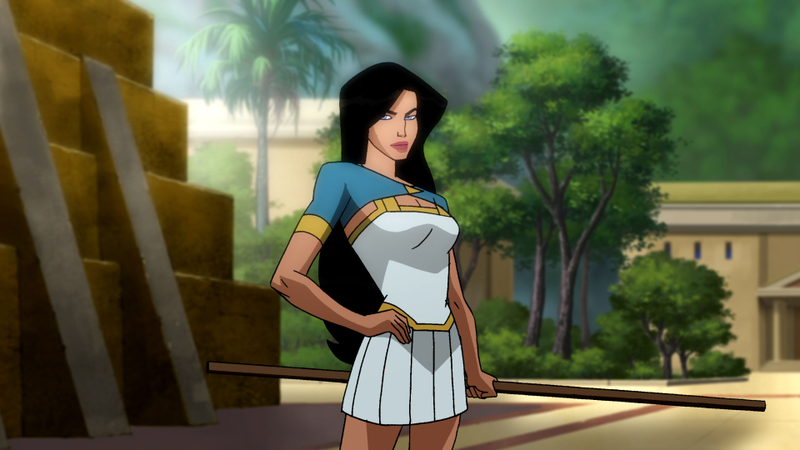 Enough plot spoilers, but suffice to say both action and a healthy dose of romantic comedy ensue. The crowd in the preview screening at Wondercon spent most of the movie straying between laughter and "boo-yah" style cheers.

Bruce Timm has been at Warner’s for 20 years, and continues to crank out superior superhero fare. What started with the gritty noir of Batman: The Animated Series continues with a serious, funny, action-filled look at one of the greatest superheroes ever drawn, and all signs show he’s perfectly happy to keep playing with the characters DC has given him. (A Green Lantern animated movie is on track to be released this summer.)

Director Lauren Montgomery demonstrates a well-balanced eye toward mixing the fun and serious aspects of the material, and Michael Jalenic’s screenplay, from a story by him and well-respected comics writer Gail Simone, interjects great geeky moments of humor and action. An all-star cast of voice actors, deftly handled by iconic voice director Andrea Romano brings it all to life.

While Marvel seems to have hit upon the formula for turning its comics properties into successful live-action movies, Warner Animation has the market tied up when it comes to keeping the comics looking like comics,while treating its audience like grown-ups.

Wired: Action, comedy, bondage jokes — this movie has it all.

Tired: Parents will want to pre-screen it to make sure it’s appropriate for their kids.