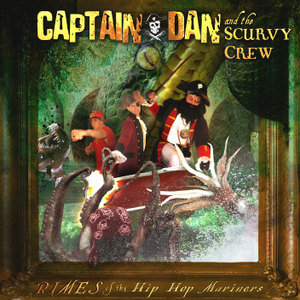 It’s Pirate Week here at GeekDad, an extended observance of all things piratical in anticipation of Friday’s Talk Like a Pirate Day. Thus, as the blog’s quasi-official music guy, I felt the need to direct our wayward readers toward some particularly appropriate tunes.

At this summer’s Nerdapalooza festival in Orlando, I saw a great many strange and wonderful things. I witnessed a squad of guitar-wielding robots battle space mutants for the safety of Earth. I saw man-sized sock puppet Uncle Monsterface don papal vestments and rock out to Madonna’s "Like a Prayer." I even watched a Black Mage play the accordion. But of all these surreal and admittedly ridiculous experiences, none compared to the sheer musical might of Captain Dan & the Scurvy Crew.

Oh, I had heard their names before – The Captain, Sea Dawg, Shivaame Timbers – in the shanties of old sea salts up and down the coast. I had likewise heard their unique blend of baroque instrumentation and hip-hop beats (not to mention their humorous rhymes of grog, wenches, and sea life) on their albums Authentic Pirate Hip Hop and the Rimes of the Hip Hop Mariners. But naught prepared me for the full-on lyrical assault of the live Scurvy Crew experience.

There were hooks. There were eye patches. There was rum. It was a nautical nightmare from the very heart of the Leviathan, in verse no less. And by the end of their set, every able-bodied man and women in attendance had been conscripted into their dastardly crew.

Should you too care to come aboard, march your peg leg over to the official Captain Dan MySpace for a taste of pirate rap at its finest. But be warned: these are salty rhymes for unruly buccaneers, with material that is quite probably unsuitable for your younger geeklings. Better I warn you now than you make me walk the plank later.

Forza Motorsport 4 Is a Joyous Celebration of Speed

Review of The Whisper Jar by Carole Lanham

Kinect Star Wars Trailer Will Recruit Many To The Dark Side